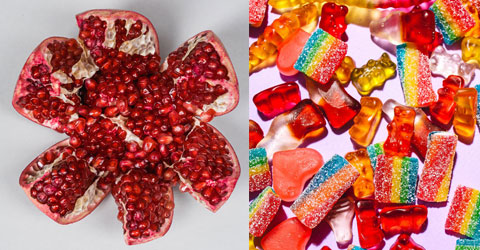 Throughout my years of foraging, I have smelled, tasted, and felt many different plants and mushrooms. I’ve consumed nearly 90 unique mushroom species and 100 different plant species. And every once in a while, these wild foods evoke memories of my childhood, which was filled with tasty candy and chronic disease.

After reading Michael Moss’s Salt, Sugar, and Fat: How the Food Giants Hooked Us and Hooked: How Processed Food Became Addictive, I came to understand the intricate process involved in creating addictive processed foods. I can easily envision food researchers at Monell foraging in the woods for flavors to hook future consumers. Much like pharmaceutical companies look to the forest for natural medicinal properties that can be synthesized into new drugs, it’s likely that processed food manufacturers are influenced by nature.

Below I share six wild plants and mushrooms that bear some resemblance to the processed foods that hooked me as a child. Few people know the link between these plants and the processed foods they might have inspired, but their familiar properties will help to explain why we have so easily been able to introduce things like gummy bears or artificial flavoring into our diets. Despite the fact that relatively few people have tasted these wild foods, they continue to play an important part in inspiring commonly consumed processed foods.

This article will focus less on identifying these plants and mushrooms and more on my lived experience and their connection to well-known candies, but if you’re interested in foraging for these wild foods in your area, please make sure to read my article 5 Steps to Start Foraging. 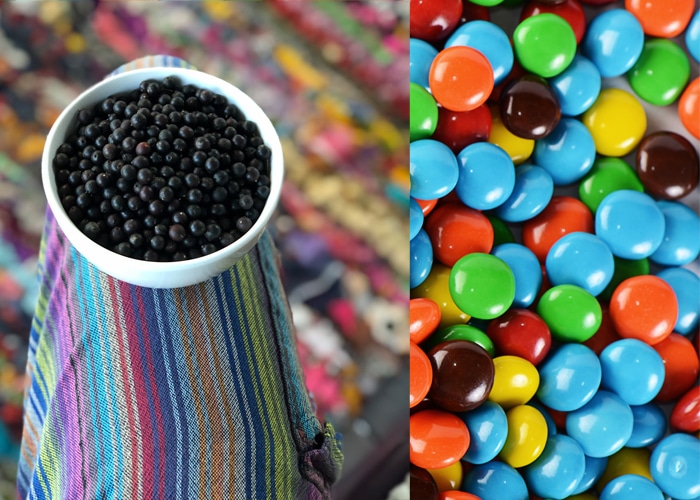 The sugar hackberry, and hackberries in general, has played a pivotal role in all of our lives. Indeed, our ancestors likely survived on hackberries during the winter. These berries were found at Peking Man archaeological sites estimated to be 500,000 years old, making it one of the oldest known plant foods eaten by our ancestors![1] Hackberries have also been excavated in archaeological digs in present-day Turkey, Pennsylvania, Peru, Honduras, Mexico, Arizona, Indonesia, Sudan, and South Africa.[1] These berries were likely key to our ancestors’ survival because, “unlike most fruits, the berries are remarkably high in calories from fat, carbohydrate, and protein, and these calories are easily digestible without cooking or preparation.”[1] There are six different species of hackberry in the U.S., all of which produce edible fruit.[1] I’ve eaten the “sugar hackberry,” Celtis laevigata, and indeed it tastes just like sugar!

Like M&Ms or peanut M&Ms, these berries have a sugar-coated outside and a crunchy, fatty inside. Some berries even remind me of my mom’s banana bread. But beware, each tree (even within the same species) has a different hardness to its berry. Some berries have a soft, delicate inside that gives way easily. Others are tough, resembling a jawbreaker. Also, the inside shell becomes sharp when chewed, which can also cause some tooth sensitivity. I learned this the hard way. The hard consistency reminds me a bit of those Candy Button candies and the hard crunch that comes when you bite into them. If I learned anything from Michael Moss’s work, it’s that texture and mouthfeel are equally important to flavor. This tree produces both delicious fruit and an unforgettable crunchy experience. 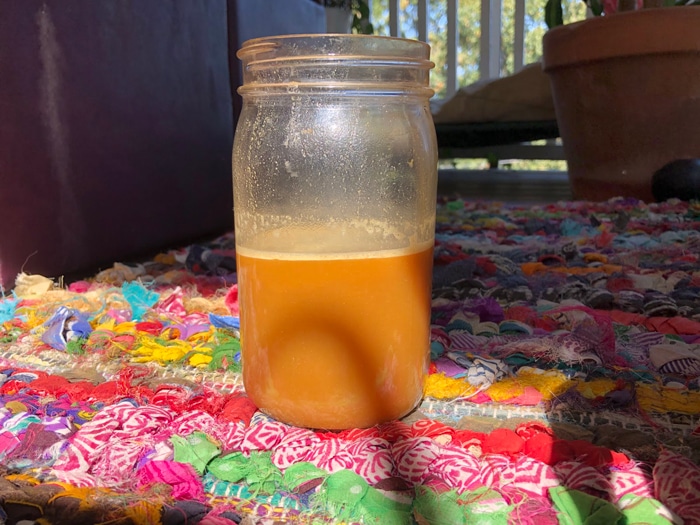 For those who want to try this fruit but have concerns about their teeth, I’d recommend making a trail mix using Sam Thayer’s recipe. Just crunch up the seeds using a pestle and mortar. You can then let the berries melt in your mouth and swallow the seeds without letting the seed fragments touch your teeth. Alternatively, you can strain out the seeds to make nut milk. Just like many processed foods, these berries can stay good for quite some time, giving you calories for days on end. Sam Thayer goes so far as to say that you could likely survive off of these berries alone due to their fat and sugar content. 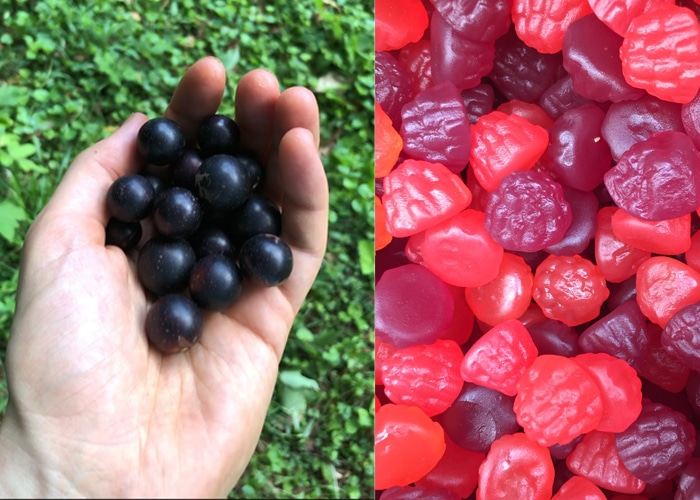 While it might seem obvious that a grape tastes like grape flavoring, I’ve noticed that wild muscadines and even locally grown muscadines contain a flavor profile not shared by any other grape. The difference in genetic makeup may partially explain this—muscadine grapes contain 40 chromosomes compared to the 38 contained by other grapes, making them difficult to crossbreed and giving them a unique flavor profile.[2] When you bite into a wild muscadine grape, the immediate rush of sugar and flavor might bring you back to a sugary childhood. According to my organic gardening professor at the University of Georgia, people tend not to like fruits with large skins or bitter insides—opting for milder fruits with smaller seeds—which is why you rarely see muscadines sold in supermarkets, but they are becoming more common in stores like Whole Foods and local CSAs or co-ops.

As many plant-based readers know, the thick, dark purple skin indicates higher levels of antioxidants; “based on the ORAC standard measurement, muscadine grapes have been measured as high as 6,800 per 100 grams, compared to 739 for red grapes. Muscadine grape skins alone have about 6-8 times as much antioxidant capacity as whole blueberries.”[2] The thick skin makes up about 40% of the fruit.[2] 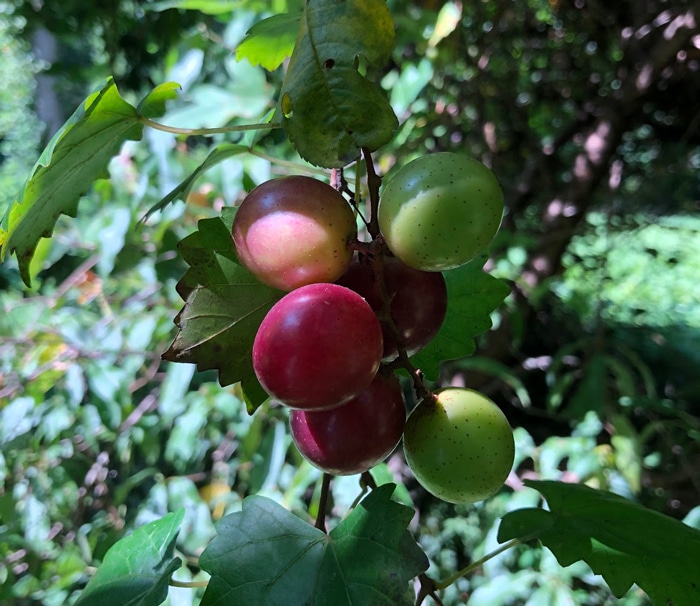 Beneath that skin is a seed and jelly concoction. I usually spit out the seeds because eating too many can numb the tongue. Just as children learn their lesson when consuming too much candy, you do not want to eat a bowl full of muscadines in a single sitting. 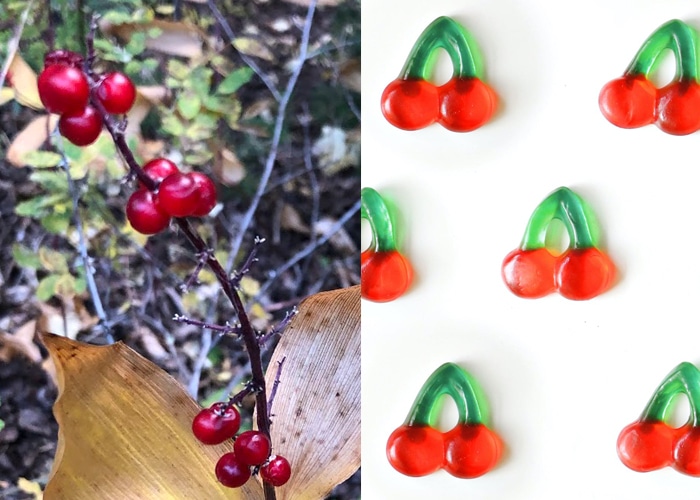 My experience with false Solomon’s seal is one of excitement and confusion. The first time I ate false Solomon’s seal was in Telluride, Colorado, where I ate the berries from a yellow-leaved plant. They tasted absolutely amazing and deliciously sweet. My girlfriend remarked that they resembled gushers from her childhood. We enjoyed these candy-like berries in moderation and shared them with our friends who found them equally pleasant, without a hint of bitterness.

But when we sampled another false Solomon’s seal with green leaves upon our return to Georgia, the berry was more bitter. A few weeks later, I sampled yet another plant near the Appalachian Trail, and the fruit was sweeter than the first Georgia berries I had tasted, but that sweetness slowly faded into a more acrid taste. Upon reflection, it’s likely that the berries in Colorado tasted better because they were closer to the end of the season. Freezing can make some berries sweeter, and this may explain why the Telluride berries resembled gushers, whereas the Georgia berries in early fall resembled cough medicine. 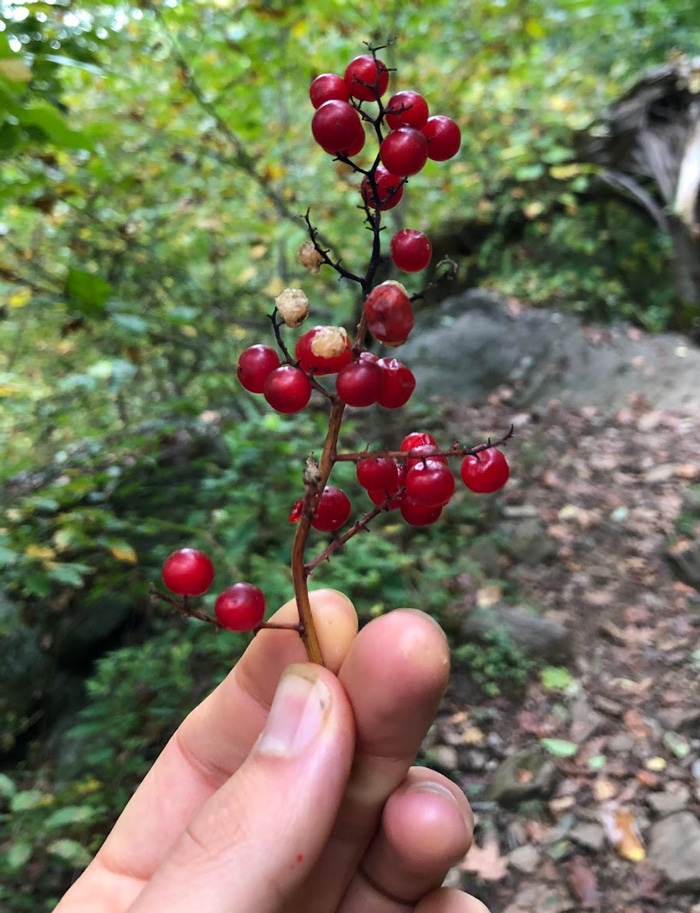 “The Gitksan picked them ripe, in August, and preserved them in ooligan grease, storing them in boxes in a cool place. They were said to be often reserved as food for chiefs. The Carrier call the fruits ‘sugar berry,’or ‘saccharin berry,’and, as well as eating them themselves, consider them a very important food for bears and many smaller animals.[3] The berries of the false Solomon’s Seal are edible either raw or cooked. They are rather bittersweet and the flavor may be somewhat disagreeable to some tastes. The Indians are said to have used them a great deal, and they should provide good emergency food for anyone.”[3,4]

Ironically, though much of the False Solomon’s seal is edible, you should not consume Solomon’s seal berries or their leaves. If you get into foraging, realize that common names rarely tell you anything about edibility, and you should always research any plant or mushroom you find before consuming it. 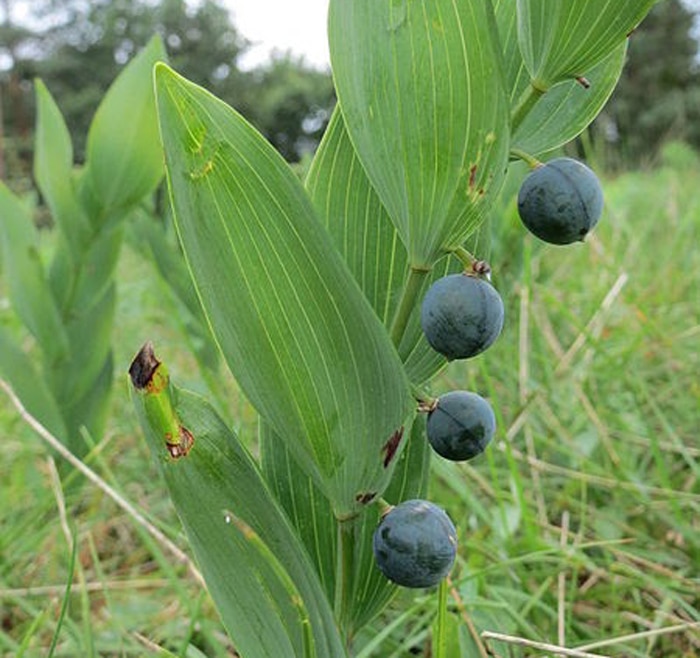 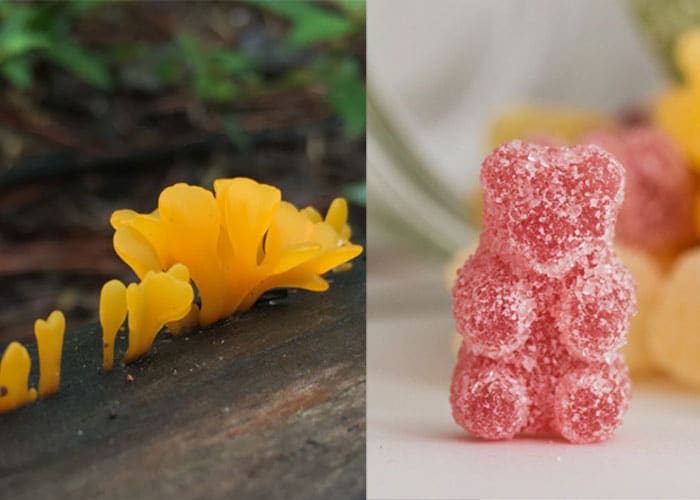 Gelatinous masses in the forest might seem alien to the human pallet and experience. It’s hard to imagine our ancestors eating something as odd as jelly, but it turns out there are many edible jelly fungi, many of which contain a texture similar to the candy that continues to hook children and adults alike.

And it’s not just the texture that’s similar, but also the diversity of colors. I have eaten light- and dark-brown jelly fungi, white jelly fungi, clear jelly fungi, and yellow jelly fungi. The most commonly consumed is the wood ear mushroom used in sweet and sour soups and often sold in Asian markets. Some mushrooms, like the snow jelly mushroom, are highly prized in Asia. The mushroom is used in desserts, ice creams, drinks, and savory dishes. They have been able to grow over 130,000 tons of this mushroom in a year in Southeast Asia.[5] 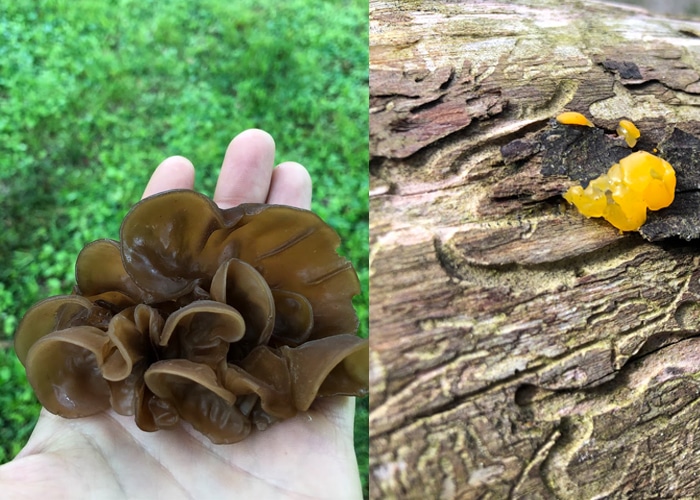 Despite their diversity and how easy they are to identify, few people in the U.S. know about jelly mushrooms. The common name “witches butter” was even denigrated by some in the U.S. 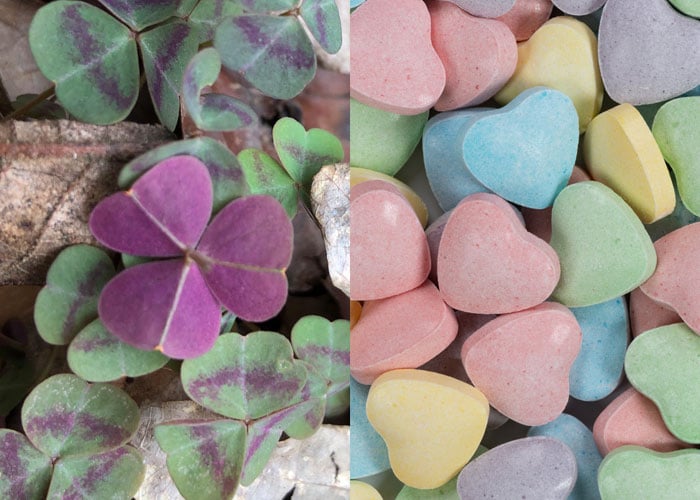 There are many varieties of oxalis, these ones have a beautiful purple underside.

Wood sorrel is a common, shade-loving plant that has a tart taste. Due to its oxalic acid content, you wouldn’t want to make this your main meal, but it is an excellent addition to salads and a wonderful trail snack. Both the sorrel and the flowers are edible, tart, and delicious! I never quite understood why people enjoyed sour and tart candies, but it began to make a lot more sense after trying the wood sorrel! 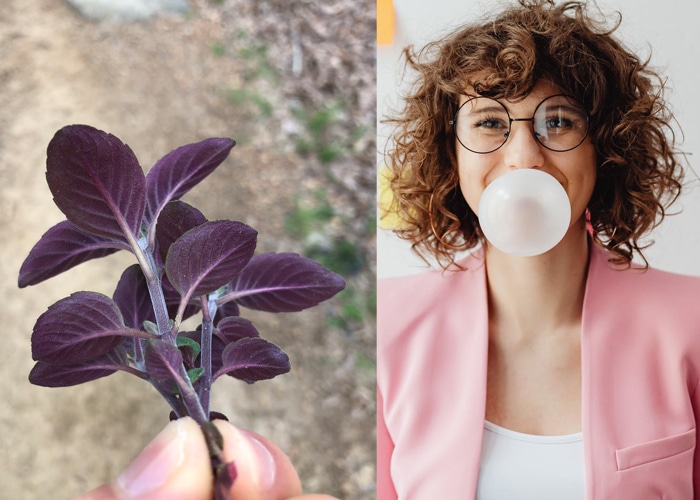 The mint plant played a special role in my development and relationship with food. When I was around 10 years old, my father purchased a mint plant. When I ate the mint leaf, I remarked, “this tastes just like the gum!” How ironic. I was so heavily inundated with processed foods that my first taste of mint was not from the plant but from mint-flavored gum. This connection between a mint plant and the candy flavoring was one of the first sparks that brought me back to nature-based foods. I couldn’t believe that the gum I chewed for so much of my life was flavored after real plants. It is this realization that I continue to have when I encounter wild mushrooms and plants. 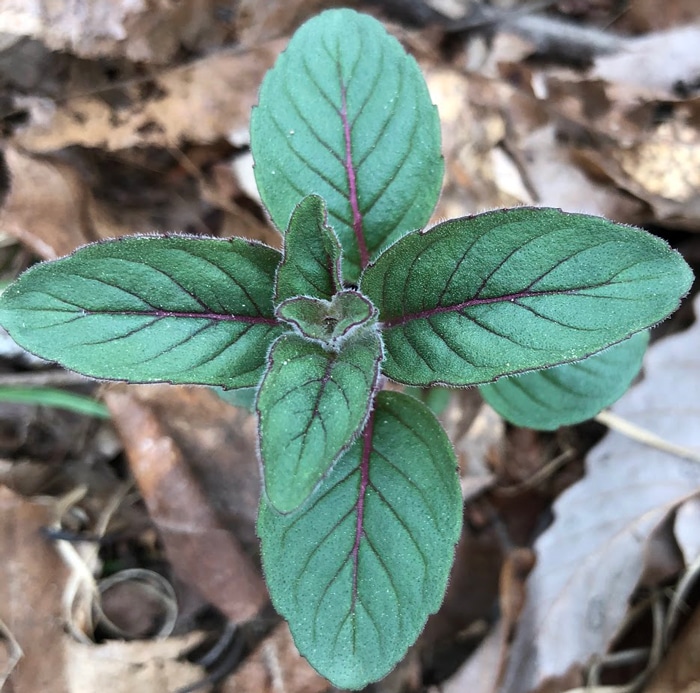 If you have discovered other wild plants or mushrooms that taste, smell, or feel like candy, let me know in the comments or in the Center for Nutrition Studies’ Food and Sustainability Group. I love hearing your stories and learning about foods that grow far away from me!

Can I Still Have Sugar on a Whole Food, Plant-Based Diet?