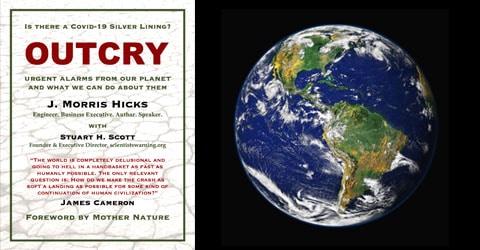 Urgent Alarms From Our Planet – OUTCRY Foreword by Mother Nature Herself

The following is an excerpt from OUTCRY, Urgent Alarms From Our Planet and What We Can Do About Them. (April 2020, Kindle Direct Publishing) by J. Morris Hicks with Stuart H. Scott. OUTCRY is only available as an e-book (for environmental reasons).

This message is addressed to the billions of humans who reside in the developed nations of planet Earth.

You may wonder why I am not sending this message to all humans who live here. It’s because you in the developed world are the ones who have done most of the disruption of my efforts to sustain you—while the remaining three or four billion people have done most of the suffering as a result of your reckless behavior.

A little background. Our planet became part of the Milky Way Galaxy over four billion years ago and the first forms of life emerged here a few hundred million years later. During those four billion years of life on our planet, millions of species of plant, bird, insect, fish, reptile and mammal have come and gone.

And it seems like only yesterday that you humans arrived—in fact, it has been about 300,000 years—a mere blink of the eye in geological time. So, let’s put your Johnny-come-lately status in perspective. Imagine that all of the last four billion years (of life on Earth) could be crammed into just one year. What portion of that single imagined year has your species been a part of Earth’s biodiversity?

Amazingly, you humans emerged as a species in just the last thirty-nine minutes of the last hour of that imagined year. Yet in just those few short moments, what a mess you have made—running roughshod over millions of other species in the wild—while stealing their natural habitat to establish your residences, farms, factories, shopping centers, warehouses, theme parks, bridges, tunnels, airports, golf courses, schools, concert halls, sports arenas, prisons, freeways, zoos, cemeteries, and on and on.

I am still in your corner and am hoping that you humans will come together, restore order and learn to live in complete harmony with all of nature.

You seem oblivious to the damage you are inflicting as your reckless behavior keeps getting exponentially worse. In just the last two seconds of that imagined year mentioned earlier, your population has exploded eightfold—going from one billion in the year 1800 to almost eight billion in 2020. And each time your population doubles, your consumption of manufactured goods quadruples—as more people in the developing world are able to buy stuff that they don’t really need for the first time.

Sadly, there appears to be no end to your madness as you continue to swell your numbers by well over one million people every week—while at the same time, you keep squandering my overly-stressed natural resources to maximize your steadily increasing consumption of stuff. Then, most of that stuff ends up in landfills within a matter of months, adding insult to injury in your abuse of my hospitality.

Just since 2006, when the United Nations issued a huge report, Livestock’s Long Shadow, chronicling your unsustainable agricultural practices, you’ve added over one billion new mouths to feed, caused additional erosion of hundreds of billions of tons of topsoil and destroyed another billion acres of rainforest.

What’s the matter with you people? You seem to be intent on destroying every element of the natural world that has preceded you—leaving me with no other choice but to concentrate primarily on protecting all the other natural species with which you share the planet—the species that you seem so intent on destroying.

As a result of your failed stewardship of this planet, things are likely to become very painful for you in the near future and for that I am terribly sorry. But frankly I have run out of patience with you and your selfish ways. Quite simply, you’ve become very problematic tenants who are now in serious danger of being evicted. Consider this your first warning—yet it could be your last. If you don’t get your act together real soon, I am doubtful about your long-term chances.

As you may know, there is a chance that artificial intelligence empowered robotic cyborgs may someday take over the stewardship of this planet since you humans have failed so miserably. Perhaps they could do a much better job than you have done, yet for some reason, the whole idea makes me nervous.

So due to my uneasiness about the cyborgs and despite all of your failures, I am still in your corner and am hoping that you humans will come together, restore order and learn to live in complete harmony with all of nature—for a long, long time to come.

PS: The rest of this book will outline how you can earn your way back into my good graces. It won’t be easy, and you will quite possibly fail, but at least you have been warned and you do still have a chance to make things right. My friends, the authors, will do their best to show you the way in this timely book which was published (e-book format only) without killing any of my trees.

This was an excerpt from OUTCRY, Urgent Alarms From Our Planet and What We Can Do About Them. (April 2020, Kindle Direct Publishing) by J. Morris Hicks with Stuart H. Scott.