Topics » Environment & Sustainability » Asking the Right Questions About GMOs: Do We Need GMOs To Feed the World? 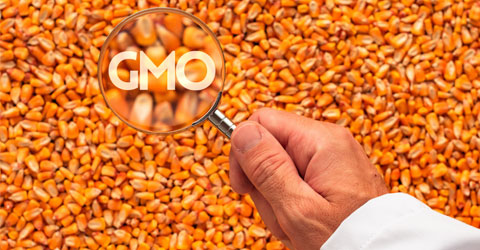 Asking the Right Questions About GMOs: Do We Need GMOs To Feed the World?

Though nearly 50 years have passed since the first genetically modified organism (GMO) was engineered in 1973, there remains much confusion about the production, use, regulation, and long-term health and environmental consequences of GMOs. Massive propaganda campaigns funded by corporations like Monsanto (acquired by Bayer in 2018) have increased public confusion and dismissed valid criticisms as pseudoscience. For this GMO article series, I interviewed molecular biologist and plant scientist Jonathan R. Latham, PhD, co-founder and Executive Director of the Bioscience Resource Project and the Director of the Poison Papers project, to get answers to the questions we should really be asking about GMOs.

Is it true that we need GMOs to feed the world?

Proponents of GMOs often claim that GMOs will help feed the world’s growing population, which is anticipated to reach 10 billion by 2050.[1] In some ways, this may be true. After all, because of the intensive farming practices enabled by GMOs, our food system already produces more than enough to feed that projected population of 10 billion.[1]

Yet despite this productivity and abundance, nearly one billion people worldwide are still hungry, and even more are malnourished.[1]

While GMOs do present a theoretical opportunity to improve agriculture amidst a changing climate—increasing yield, drought resistance, or heat tolerance, for example—there are many uncontrollable factors limiting their alleged usefulness. This is especially true because most genetic alterations produce only “tiny percentages” of yield increase or improvements in stress tolerance. As Dr. Latham puts it, without actually addressing rising temperatures, “it doesn’t matter what you do, GMOs, no GMOS, you’re going to be fried.”[4] GMOs that produce marginal gains in tolerance are no better off than organic crops when it comes to surviving the increasingly severe, unpredictable, and variable effects of climate change.[4]

GMO technology enables the world’s most harmful industries to expand their reach and our dependence on them.

As temperatures rise and environmental conditions change, so too will the crops we are able to grow in certain areas. But GMOs are not necessary for that adaptability. “What they want to do with GMOs is take these four or five commodity crops and [grow them] in extreme temperatures… They want corn to be grown further north, further south, further west, and further east.”[4] In other words, the qualities selected for various GMO crop varieties serve not to improve the resilience of agriculture. Rather, they exist to displace other crops and expand profit margins.

What exactly are GMOs feeding us?

Going by the evidence of current and past production, the main goal of biotech companies is clearly not to feed the world nutritious food.

The vast majority of GMOs are commodity crops such as corn, soy, and canola. These in turn are primarily used to produce livestock feed and, in the case of corn, ethanol for fuel.[1, 5] When they are used to feed people directly, as Dr. Latham pointed out, it’s most often in the form of processed junk food.[4] As meat consumption and automobile use continues to trend upwards globally, meeting projected demands will require more GMOs.[1, 2] But is this something we actually want? Climate scholars and activists tell us we need to phase out meat-heavy diets and fuels with high carbon emissions to meaningfully address climate change. What does it say about GMOs when they functionally exist to do the opposite? 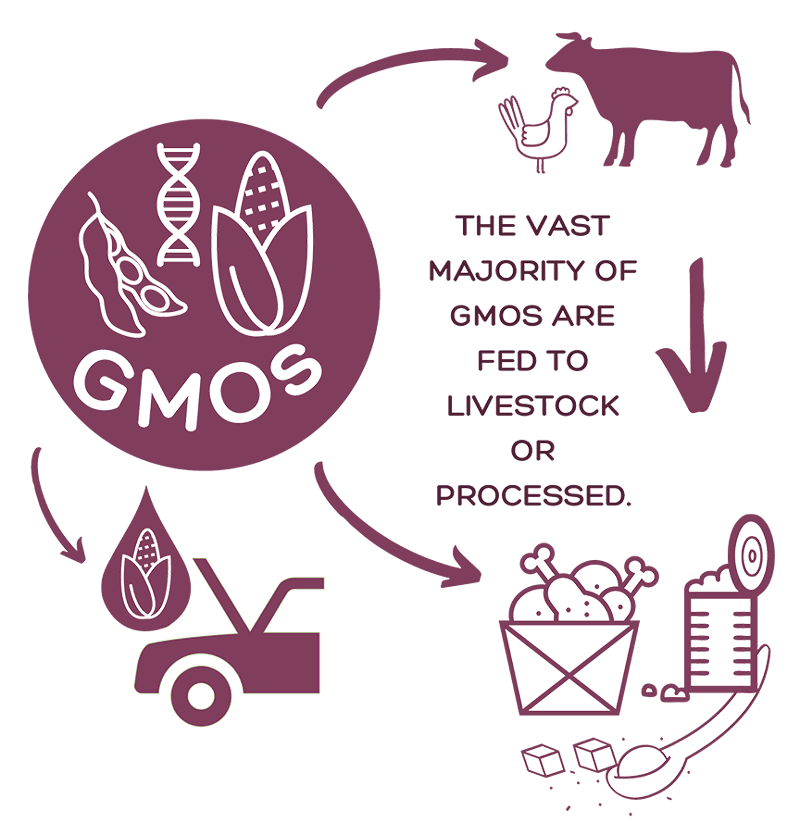 Are GMO-based solutions a distraction?

Now that we know we are producing more than enough to feed everyone on the planet today and in the coming decades, we need to reject the notion that producing more food is the key to ending world hunger. One-third of the world’s food supply is wasted each year,[3] and the market forces of capitalism incentivize it by prioritizing profit above all else. The solution to this waste, and other inefficiencies in the food system, is not more GMOs. If anything, the type of food production GMOs are designed for is more inefficient—as arable farmland that could be used to feed people directly is used to grow livestock feed. When asked about the significance of the use of GMOs for livestock feed, Dr. Latham said: “how can you say that you are feeding the world and improving the climate when you are [feeding] most of your products [to] animals that are bad for your health [and the environment]?”[4]

GMOs are not being used to create sustainable food systems, promote clean energy, or feed human populations healthy foods. They are not the silver bullet solution, as they have been advertised, necessary to ensure future food supplies. Instead, GMO technology enables the world’s most harmful industries to expand their reach and our dependence on them. They perpetuate the very problems they claim to help fix, and distract us from the massive problems of currently dominant agricultural practices. As inequities under capitalism worsen, resources become scarcer, and the world’s appetite for unsustainable animal-based foods grows,[2] GMO producing companies will continue to distract with the illusion of a food production crisis, but this only masks the far more pressing threats to our health and survival: inequality, reliance on processed foods and fuels, and unsustainable, industrialized agriculture systems.

8 Tips on How to Avoid GMO Foods

Seeds: Our Global Crisis Plus 5 Actions We Can All Take