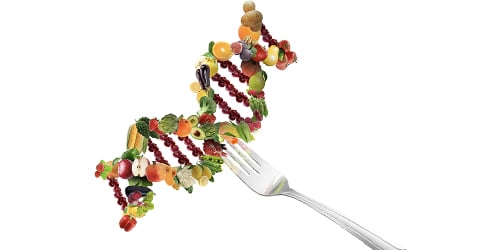 DNA or Dinner? Are Certain Health Conditions a Life Sentence or Can Food Help Reset Your Genes?

The following is an excerpt from Healthy at Last: A Plant-Based Approach to Preventing and Reversing Diabetes and Other Chronic Illnesses by Eric Adams (Hay House Inc., October 13, 2020).

All of a sudden, I had diabetes. It would define the rest of my life. Everywhere I went, everything I did, I would have to keep in mind: Is this safe with my condition?

At first I obeyed my doctor’s orders. What else could I do? After all, he went through four years of medical school, a residency, a fellowship, and many years of practice to arrive at his conclusion. If he said I’d need meds for the rest of my life, surely he was right. And so I went about my normal business. I learned to live with my impaired vision. But then came the side effects from the medication: the upset stomach and general fatigue. Moreover, the pills didn’t help the general aches and pains I started having after 40. Whenever I saw a clock, I thought of my own life slowly winding down.

Like many Black people, diabetes runs in my family. We even have our own word for it: “sugar.” When I was growing up, it seemed that everyone in the family eventually came down with it. After my aunt Mary was diagnosed with sugar, she brought a colorful pill organizer wherever she went. I thought that was normal. After my mother was diagnosed with sugar, she had to get regular insulin injections. That was normal. When my aunt Betty died of sugar at age 57—that, too, was normal.

I remember attending a family reunion with my mother not long after Betty’s death. When we arrived, I realized Mom had forgotten her diabetes medication. “We have to go back for them,” I told her. But Mom rolled her eyes and yelled out to the family, “Anyone have any diabetes medicine I can take?” Nearly everyone in the room pulled out a plastic case and shook their pillboxes in unison.

My family had pills that were every color of the rainbow: metformin, sulfonylureas, statins, blood pressure medications, and many others. As a kid I watched my family rely on these drugs, and now, at age 56, it was my turn. When I left the pharmacy after my diagnosis, I thought: Is this really my future? I had put myself through college, worked my way up from a beat cop to a captain to the New York State Senate and then to Brooklyn Borough Hall. I had a plan to become mayor of New York one day. I stared at those sad little pills in that sad little box and thought: I’ve come too far to live out of a pillbox, man. There must be a better way. A healthier way.

Was Chronic Disease and Pain Encoded Into My DNA?

When I asked my doctor about other options, he held up his hands. “I’m sorry, Eric. There aren’t any. If you lose some weight and stay on your meds, we might be able to keep your diabetes from getting worse. That’s the best you can hope for.”

That’s the best I could hope for? I wasn’t going to accept that. I wasn’t going to accept a bad situation and just live with it. I certainly didn’t do that after I was arrested for trespassing at age 15. It was a dumb thing to do, but the white cops thought it was appropriate to take me to the basement of the 103rd precinct, beat me up, and toss me into a juvenile detention center. Instead of accepting that this was how police officers would always treat young people of color, I vowed to join that same force and change it from within. As a police captain, I co-founded 100 Blacks in Law Enforcement Who Care, an advocacy group focused on improving relations between police officers and African Americans. When I was elected to the New York State Senate, I fought vehemently against the NYPD’s stop-and-frisk policy and other forms of racial profiling.

There are some things you just don’t accept, and bad health is one of them. My family and my doctor believed that sugar was genetic. It’s just something that happens when you get older, they said, especially for Black folks. As a former police officer, though, I knew better than to take anything for granted. I was going to evaluate the situation based on the evidence and come to an informed conclusion, just like I would at a crime scene. Was chronic disease and pain encoded into my DNA? Or was there something else going on?

What About My Diet?

The obvious place to look was my diet—one born from long hours on the beat. For many years I worked the midnight to 8 a.m. shift, so there weren’t many quality food options available. There was only fast food. I became a connoisseur of the dollar menu. I’d roll my patrol car through the McDonald’s drive-through at midnight for a double cheeseburger, swing by KFC at 2 a.m. for coffee and fried chicken, and throw back a few slices at Pizza Hut before dawn. If it was a particularly bad night, I’d hit up Wendy’s for a shake and another burger and fries. For years and years, it was the same routine: fast, cheap, and easy meals—or comfort food, as you might know it.

Ronald, Wendy, and the Colonel may have helped me get through some tough times, but they were taking their toll on my body.

For current and former police officers like me, comfort food means something deeper. It means safety. After responding to a multifatality traffic accident or to a murder, the last thing I wanted to think about was how healthy my food was. Picking up groceries at the store was not a priority. I needed food that would take the edge off. Psychologists have a term for what I experienced: vicarious trauma, also known as “compassion fatigue.” While on duty I was calm and collected, but after, when I had time to process the horrors of the day, I relied on food as a coping mechanism. I self-medicated with Big Macs and milkshakes. French fries and chicken wings. Coca-Cola and nachos.

Comfort food helped me get through the aftermath of September 11. Hours after the Twin Towers crumbled, I arrived at Ground Zero to guard the search-and-rescue workers. We didn’t know yet who had attacked us, and we were in constant fear. Nearly every restaurant downtown was closed except for one, an Italian place on Canal Street that stayed open 24/7 for first responders. We’d stumble in at 4 a.m., covered in toxic dust. The restaurant owner would shuffle out of the kitchen with plate after plate of baked ziti and chicken. Most of us were still shell-shocked from the attacks and shoveled the food down without thinking. We didn’t care how many calories were in the buttered pasta, how much saturated fat was in the lamb, how much cholesterol in the salmon. Food was a respite, a constant, a support mechanism. Even later in my life, when I traded in my police sidearm for a suit and tie to serve in the New York State Senate, I depended on the same comfort food. If I had a bad day at the office, there was always a Quarter Pounder waiting for me. And there was no better destressor than passing around the KFC bucket with my family.

Ronald, Wendy, and the Colonel may have helped me get through some tough times, but they were taking their toll on my body. First the weight piled on, and then came the aches and pains—small ones, then big ones. My back hurt getting out of bed. My feet hurt walking to the subway. I was constantly tired. All of this became normal. Like all Americans who struggle with chronic pain, I soldiered through. I convinced myself that feeling unwell was just a natural by-product of aging. It was only a matter of time before I succumbed to the “Black package,” as my family likes to call it: diabetes, high cholesterol, and high blood pressure. When I received my diabetes diagnosis, my mom was taking at least four pills per day: one pill to lower her blood sugar, another for her cholesterol, and two more for blood pressure. And at age 56, it was my turn.

But something wasn’t adding up. Why was it that African Americans were nearly twice as likely to be diagnosed with type 2 diabetes compared to white people? I read a study in the New England Journal of Medicine that found that before age 50, African Americans’ heart failure rate is 20 times higher than that of Caucasians. Was early death simply hardwired into Black DNA? Sifting through the data reminded me of the NYPD’s “Heart Bill,” which allows for special benefits and early retirement for officers who suffer from heart disease. The idea is that cops are expected to have a few heart attacks due to the stresses of the job.

Read more on how Eric Adams healed his diabetes through using food as medicine:
https://cdn.nutritionstudies.org/how-i-reversed-my-diabetes-and-became-healthy-at-last/

Excerpted with permission from Healthy at Last: A Plant-Based Approach to Preventing and Reversing Diabetes and Other Chronic Illnesses by Eric Adams (Hay House Inc., October 13, 2020).