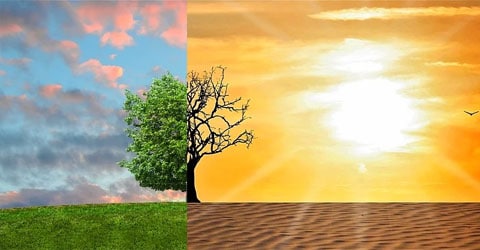 Our Food Choices and Global Warming

Let’s start with the most prominent ecological crisis of our time: global warming. When you look seriously at the numbers, you find that switching from a meat-based to a plant-based diet would do more to curb and reverse global warming than any other initiative.

One of the intelligent criticisms of Al Gore’s powerful and important documentary, An Inconvenient Truth, was that its prescriptions were woefully inadequate in light of the problem’s magnitude. Tips like replacing incandescent light bulbs with compact fluorescents, lowering your thermostat by a couple of degrees, and keeping your car tires fully inflated may make you feel virtuous, but have little to no impact on the real problem. A tip sheet available from ClimateCrisis.net announces that reducing the amount of garbage you produce by 10 percent can save 1,200 pounds of carbon dioxide per year. When you do the math, you realize that the other 90 percent of your garbage still produces 10,800 pounds of CO2 each year. Doing the same things a little less intensively is not going to turn global warming around, especially when the CO2 we’ve already produced is going to be trapping heat in the atmosphere for hundreds of years to come. It’s like we’re all on a bus that’s speeding toward the edge of a cliff, and the best idea we have is for everyone to stick their arms out the windows to increase wind resistance. Maybe someone should jump into the driver’s seat and hit the brakes!

In 2006, the United Nations’ Food and Agricultural Organization issued a report that highlighted the connection between animal foods and global warming.[1] Its contents are striking because this agency is chiefly responsible for developing livestock operations around the world. Being biased, if anything, toward observing the opposite effect, this report still concluded that eating animal-based foods creates 18 percent of global warming, more than the contributions of either industry or transportation.[2] This information, now six years old, is still not widely known.

On the relatively few occasions that food enters discussions on global warming, this 18 percent estimate is brought up. However, a more recent report concludes that this estimate of food’s contribution to warming may be much higher. Robert Goodland, the longtime senior environmental advisor to the president of the World Bank, and Jeff Anhang, his colleague at the World Bank Group, have determined that livestock rearing contributes at least 51 percent of total global warming.

The most famous greenhouse gas, the one that gets most of the attention from the media, activists, and policy makers, is CO2. But CO2 is not the only greenhouse gas, and is not in fact the one most sensitive to reduction efforts. Methane (CH4) offers a more promising lever with which to push back global warming. Molecule for molecule, methane is about twenty-five times more potent in trapping heat than carbon dioxide. But more important, methane, with an atmospheric half-life of seven years, disappears from the atmosphere far faster than carbon dioxide, which has a half-life of more than a century. So almost as soon as we eliminate sources of methane, its contribution to the greenhouse effect begins to wane significantly. By contrast, even after we stop releasing CO2, the gas that has already been released will contribute to global warming for decades.

When the amount of methane in the atmosphere is considered over a twenty-year period, its global warming potential is said to be seventy-two times that of CO2.[3] And methane is largely associated with industrial livestock production. This means that reducing meat consumption, the main driver of the livestock industry, may be the most rapid way to affect global warming. It turns out that our present programs, focused on carbon dioxide reduction, are mostly a lot of hot air—in more ways than one.

If this new assessment of the methane contribution is correct, the implications are momentous. I am puzzled as to why more people in the environmental community aren’t paying attention to this. Do they not want to challenge the livestock industry? Maybe we need bioengineers to figure out how to entrap and safely process cow farts. Failing this, maybe we should stop producing and eating the machines that do the farting.[4]

Impact of Food Choices on the Environment