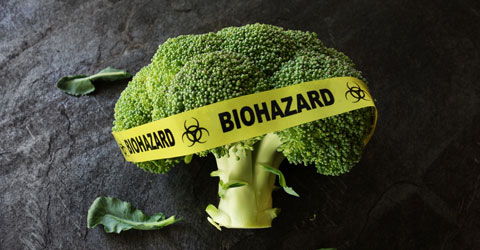 Are GMOs Safe? Asking the Right Questions About GMOs

For this GMO article series, I interviewed Jonathan R. Latham, PhD, co-founder and Executive Director of the Bioscience Resource Project and the Director of the Poison Papers project, to get answers to the questions we should really be asking about GMOs.

How do we know GMOs are safe?

Since the invention of GMOs, safety has been a dominant concern. Although many reputable institutions—including the American Medical Association (AMA) and the World Health Organization (WHO)—endorse the safety of tested GMOs, and almost 90% of scientist members of AAAS (American Association for the Advancement of Science), according to a 2014 survey, believe it is “generally safe” to eat GMOs, there remains skepticism.[5,10]

After all, it’s one thing to believe and endorse a new product’s safety and another to actually prove it. So, how do we know GMOs are safe? And who is in charge of making sure?

How is GMO safety tested?

As citizens, many of us trust that there are laws and institutions in place to regulate the market and protect our health and safety. Especially when it comes to controversial items like GMOs, we are assured that they are subject to rigorous scrutiny and testing before they are approved for sale. Yet, as comforting as this sounds, these claims have a hidden fine print.

First, though GMOs may be heavily tested, none of these tests explore the long-term impacts of GMOs on health. In fact, companies aren’t even required to test new GMOs for safety at all if their added components are “generally recognized as safe,” a claim which relies on the often untested assumption that genetically engineered “crops are largely the same as their conventional counterparts.”[4] If a company does decide to perform any sort of safety test, it is usually a short-term rat feeding trial.[3,4,8] The duration of these tests is so short that they cannot rule out slowly developing health issues like organ damage and cancer.[3] Worst of all—the regulatory framework by which we assess the value of these inadequate and often optional tests is inconsistent and incomplete.[4]

What You Should Know About GMO Regulations Infographic

Can we trust GMO regulations?

The organizations responsible for regulating the production and sale of GMOs aren’t the same as those studying their effects. Short-term “safety” studies are performed by the biotech companies themselves, who have a vested interest in selling a product that took hundreds of millions of dollars to make. It may seem surprising that we would ignore this profit motive and expect corporations needing returns on their investments to be trustworthy, yet this is exactly what our regulatory institutions do.

“Are GMO companies going to publish a study if it shows harm? That’s the question you have to ask yourself.”

To illustrate, let’s go through each of the three “regulatory” hurdles that GMO developers face in the US—the FDA, EPA, and USDA—what Dr. Latham refers to as a “pseudo regulatory structure.”[9] Even though each agency focuses on a different element of GMO safety, they all operate in a way that makes their role in regulating GMOs at best minimal and at worst, entirely performative.

How does the FDA regulate GMOs?

“It is often claimed that the FDA regulates GMOs,” says Latham, “but you can actually put a GMO on the market without even informing the [FDA].”[9] The FDA merely conducts voluntary consultations where developers submit a summary describing the results of safety assessments.[3] This summary, which is subject to omission of details and vague experimental procedures, is all that is required to gain FDA approval.[3,9] As Dr. Latham puts it, “the companies wave that around in front of journalists and the public and say ‘the FDA regulates us’ but that’s just an illusion.”[9] In addition, post-market safety evaluations from epidemiological studies are not required, so we don’t actually have any information about the potential long-term safety impacts of GMOs after their introduction to the market.[3]

How Does the EPA regulate GMOs?

According to Dr. Latham, “The EPA only has jurisdiction if the [GMO] is a pesticide.” But there’s a catch—the company gets to determine what constitutes a pesticide.[9] In other words, each company can define “pesticide” in whatever way is most favorable to them. “There are instances, for example, when I would say that something is a pesticide, but the company [says] it’s not…That means that neither the EPA nor the FDA is regulating the safety of GMOs.”[9] This company research is submitted to the EPA for evaluation with no peer review or confirmation of the results unless the EPA requests it. But, as Dr. Latham points out, “the EPA is not in a position to resist the GMO industry.” If the EPA does find a problem with respect to safety, they have no power act without approval from the White House.[9]

“[Let’s say the EPA] goes to the White House and [says] ‘we need to take GMO corn off the market because we discovered that it has a hidden hazard.’ What’s going to happen next… is the White House will tell them to get lost.”[9] Because GMO companies are often important constituents and campaign donors, the president is disincentivized to approve further research that might stand in the way of industry profits. “So even when there are completely obvious hazards…found by the scientific system…the EPA does nothing.”[9]

How does the USDA regulate GMOs?

The last leg of GMO pseudo regulation is the USDA, which has jurisdiction over the question of whether or not a GMO is an agricultural pest for farmers; for example, if it escaped into the wild.[9] But like the EPA, the USDA has little to no power to regulate GMOs even if it does establish the presence of a hazard. Past examples prove this powerlessness (or disinterest). Consider the genetically modified creeping bentgrass: “[a] golf-course company decided to release a GMO grass…in a field trial. The grass escaped [by pollinating grasses nearby]…[and it] now is all over Washington State and Oregon.”[1,9] The grass, resistant to the herbicide Roundup, was already proven to be an agricultural pest and to have caused farmers trouble, but the USDA still approved it.[1,9]

Unfortunately, we’re no closer to answering this question than we were at the beginning of this article. We have a better idea of what kind of testing is done, by whom, and what role regulatory agencies play, but with respect to GMO safety, the only honest answer is we don’t know because the powers that be don’t want us to know. As Latham points out, “you can’t generalize,” because each GMO is different; “but [there are] certain methods in common for how they’re made…If those [methods] introduce safety hazards [from DNA damage or unpredictable mutations] then you can say that all GMOs [may have similar risks]…and the jury is still out on that.”[9]

Beyond the safety studies conducted by GMO companies, there are multiple non-industry funded studies in vivo and in vitro that contain evidence that some GMOs may not be as harmless as the mainstream scientific establishment suggests.[2,6,7,8]

“Are [GMO companies] going to publish a study if it shows harm? That’s the question you have to ask yourself. They’re just going to throw it in the bin.”[9]

Asking the Right Questions About GMOs: Do We Need GMOs To...

8 Tips on How to Avoid GMO Foods