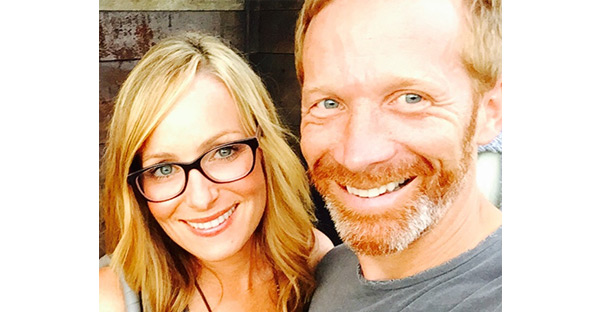 Pick the statement that would have NEVER been uttered by my husband three years ago:

A. These black beans taste so good in this quinoa.
B. Steamed spinach with lemon is incredibly delicious!
C. I just found the BEST plant-based restaurant in NYC!
D. All of the above

Answer: D. All of the above

These three statements came out of my husband’s mouth this past week alone. If you would have told me that my meat loving husband would utter just one of these assertions three years ago, I would have laughed in your face. If you told me that JD, executive producer and creator of The Biggest Loser, Extreme Weight Loss and just about every other transformation weight loss show on TV, would sell a plant-based weight loss TV show, to a new, forward thinking network called Z Living, I would have called you delusional. Plant-based weight loss shows on TV? Impossible!

I never thought when I started researching ways to lower my cholesterol three and a half years ago, that what I was learning would transform not only my family’s life, but so many other people’s lives as well. I certainly didn’t know that we would put people on a plant-based diet and they would not only lose weight incredibly fast, but we would also watch their bodies reverse disease right in front of our eyes. It was like a magic trick, only it was very simple, food was the magic bullet.

What began as a quest for the best lifestyle to keep me off of statins, led me down a brilliant, eye opening path to unarguable research that proved a plant-based diet is the best path to vibrant health and longevity. I learned that food is medicine, and the very foundation of our health. I knew at that point that we as a family, needed to eat a lot more plants and stop eating animal protein all together. As a physical therapist I know how to dive into research, pull it apart, and determine its validity, and it was all right in front of me. Eat a plant-based diet, and slash your risks of heart disease, cancer, diabetes, stroke, and dementia, to name a few illnesses that I would prefer my family and friends not suffer from.

The transition was easy for me because within a few weeks of going “cold turkey” I felt incredible. I had always questioned eating animals and no longer had to justify to myself that I needed to. The environmental impacts of eating meat had been bothering me a lot too, so it was good to feel free. I like all foods so switching to plants was easy. I just needed to find new go-to’s and break old habits. That took time, and was a little frustrating, but I love a good challenge. My cholesterol levels, despite my having a gene that causes high cholesterol, had gone down 60 points almost instantly (mostly my LDL, yay), and my energy levels were through the roof. My 3:00pm slump vanished and my workouts were rocking. No more pain in my joints, and my hair and skin were aging backwards.

I wanted to make sure that I knew as much as I could about eating a plant-based diet, so I completed the Plant Based Nutrition Certificate through eCornell, and started reading voraciously on diet and health. I was finally ready to take on my toughest task… getting my family to buy in. Implementing an “eat more plants and way less meat” diet in a family of two meat obsessed teens and a husband who saw his “grilling of steak” as an art form was far from simple. It was HARD!!! You would have had a better chance of converting Dr. Atkins himself to a plant-based diet than my husband!

But, now, 3 years later, my husband has become a poster boy for eating a plant-based diet, ‘preaching the veggie gospel’ to anyone who will listen. The boys eat so much better at home and make some pretty amazing choices even out of the house a well. They will someday decide if they want to go all the way and I’m guessing they will. Kids listen to only part of what we say, but see everything we do, so leading by example is paramount. People ask all the time how we get our kids to eat so healthy and the answer is simple, because we do!

Friends and family thought we were nuts to change our eating habits because we were the healthiest family they knew. The old “eat everything in moderation” phrase was thrown at us a lot. People want so bad to believe it. I did too. Until I educated myself. We really didn’t eat processed food, or any dairy and I cooked almost every night, but we ate a lot of meat, because we were all taught that protein was the star on your plate. All other things were just bit part players. We were brainwashed, bought into the protein myth, and like so many others who are bombarded by “protein pushers,” thought we needed it to thrive. The best way to describe how I got my family on board is that I was absolutely relentless. I am pretty sure that there was a point that they wanted a different mom and wife. I would make the same foods again, and again, and again, and insist that they try them. Quinoa dishes of all types, veggie burgers, whole grain pastas and stir-fries, salads, and lots of raw and cooked veggies at every meal. When the kids got home from school, a fruit and veggie tray was out (and still is out) every single day. At first they picked at it, and in a few weeks they were fighting over the last red pepper. Their tastes took a little while to change, but they were soon eating a lot less meat and way more fruits, veggies and whole grains, legumes, nuts and seeds.

JD’s tastes took longer to change (he is after all, a much older dog to teach new tricks to), but eventually, he started eating foods that I never in a million years thought he would eat. He had absolutely hated beans before, and started eating them in soups and burgers. And he liked them! He also started paying more attention to why he was eating the foods I was serving him. Forks Over Knives (FOK) found it’s way into our movie night one night and this helped him and the kids to understand why I felt so strongly about them eating better. It was no longer purely out of his “happy wife, happy life” mantra that he was eating what I put in front of him. He was feeling amazing and his health problems disappeared. He also realized that he was recovering from his workouts in no time flat, sleeping better, and had tons more energy. His life had changed. Food was medicine and he knew it. A big turning point for him was meeting Dr T. Colin Campbell, Nelson Campbell, and John Corry the producer of FOK. Being around people who were so educated and passionate about the plant-based lifestyle, and bringing it to others truly inspired him to do the same.

Fast forward three years and this man, formerly the king of the perfectly grilled burger, will talk to anyone who will listen about the merits of taking one’s lives into one’s own hands, and eating a plant-based diet. I am more of a lead by example and educate, and he is very outspoken. He has become evangelical and it is amazing. He is a gifted public speaker and has caught the ear of so many influential people, and I believe he will help change how we think about health and weight loss.

The show he created and hosts called The Big Fat Truth (named after his book of the same name), airs on the Z Living channel and in addition to addressing the mental issues that are keeping weight on people. We put all participants on a plant-based diet for 90 days. The changes in their health, and weight are nothing short of astounding. Diabetics no longer taking medicine; triglycerides and cholesterol brought from dire levels to healthy ranges; and high blood pressure brought to normal. And all within the first 10 days! One of our incredible participants lost 106 lbs in 90 days! They couldn’t believe their new energy levels. They would ask if it was normal to feel so much energy. People who are obese are often volume eaters, in that they eat a lot of food. A plant-based lifestyle allows for eating lots of nutritionally dense food, so volume eaters love this way of life because they don’t feel deprived and they feel full because they are being nourished. The weight falls off, and they can stick to this lifestyle forever and achieve optimal health, versus some fad diet of restriction where they lose weight and gain it all back the minute they go off.

I’m not sure that even three years ago a plant-based show would have been sold to any channel, but there has been a shift. People are starting to listen. They are sick and tired of feeling sick and tired. They are fed up with watching friends and family suffer from heart disease, cancer, and diabetes that all could have been prevented if they weren’t eating the Standard American Crap Diet.