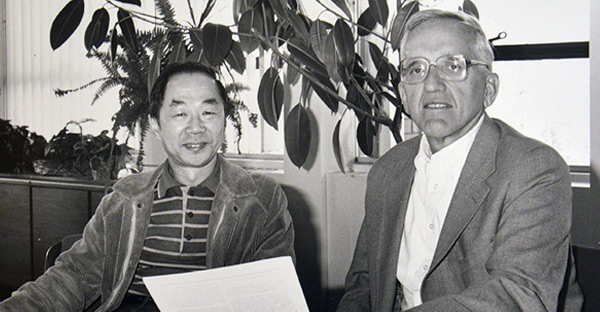 As with most good ideas, the start of the China Project was pretty simple. In conversations one morning in the office of Dr. T. Colin Campbell, the initial research plan for a study of diet and cancer in China was hatched. Dr. Chen Junshi, Associate Director of the Institute for Nutrition and Food Hygiene in Beijing, China had spent 9 months in Campbell’s laboratory at Cornell University working with our research group. He had worked on the effect of the trace element selenium on liver cancer. I was just starting as a technician in Campbell’s lab during that time and I was Chen’s technician for his stay (See China Project History: Part 1 for more details).

Now that he was returning to China, he was considering possible research into diet and cancer in China that could take advantage of China’s uniqueness. One unique area of China is the Sichuan province which has a very low level of selenium in the soil, and hence a low level of selenium in the diets of many thousands of people. Chen’s animal studies had shown that a deficiency in selenium might increase susceptibility to cancer. The basic research plan was begun–go to Sichuan and sample the foods of the selenium-deficient area and obtain statistics on the mortality rates from various cancers. These would then be compared to the selenium in foods and the cancer rates in other selected areas of China. By comparing these data, an assessment could be made about the dietary role of selenium in human cancer. The plan was rather simple and the results might be quite profound.

In scientific research, especially in epidemiology, simple yet good ideas have a tendency to grow of their own accord into rather large projects. Besides the basically sound scientific reasons, there is also the logistical pragmatics. If you are going to the field to enroll subjects in a study (an expensive and difficult undertaking), you might just as well make the most of the opportunity and do everything that is financially, politically and scientifically possible.

As Chen and Campbell were talking that morning, George Dunaif, one of Campbell’s graduate students peeked in and asked if anybody had seen the Nova show on PBS the night before on esophageal cancer in China. Dunaif went on to tell about how esophageal cancer in China is very localized and may be related to specific dietary practices in that one area. All the while Chen is nodding away. As a researcher in nutrition and toxicology in China, this esophageal cancer story was common knowledge to him and other researchers there. He went on to tell us that many cancers in China were quite localized in their occurrence, leading many to speculate that environmental and dietary patterns may play a role.

In fact, Chen explained that a cancer survey of China had been undertaken in 1973-1975 and the results were just then (in 1981) being published in a large Atlas of Cancer Mortality in the People’s Republic of China. This was by far the largest study of its kind. (When working in China, one quickly gets used to the phrase “largest of its kind.” Everything in China is large.) Zhou Enlai, Prime Minister under Mao Zedong, was diagnosed with lung cancer in the late 60’s. As he faced his own disease he found that there was very little known about cancer in China. He commissioned a study of the occurrence of cancer in China. Scientists quickly expanded this study to cover all diseases, since the added work was little more. The person to undertake and publish this study was Li Junyoa, a cancer epidemiologist in the Chinese Academy of Medical Sciences.

Li happened to be visiting the NIH in Washington at the time. In 1981 this was like lightening striking twice on the same spot. What were the chances that the two Chinese experts we wanted to talk to were outside China at the same time and actually within commuting distance! At Chen and Campbell’s invitation, Li came to visit Cornell and brought a copy of the Cancer Atlas. Not only was the book itself a beautiful piece of work, page upon page of colored maps of cancer mortality rates across China, but the data behind the maps was even more impressive. The maps and data showed a startling unevenness in the cancer rates across the vast expanse of the “Middle Kingdom” with some areas almost devoid of cancer and other areas, particularly the cities, with high concentrations. Compared to China, there is little pattern variation in cancer rates across the US. This lay the foundation for a study of cancer across the whole of China.

In their discussions Chen and Campbell decided to include a “simple” blood collection to their plan to assess the selenium status of the subjects. But if they were going to collect blood then why stop at just measuring selenium; why not measure all kinds of things that may relate to an increased risk of cancer. And if they were looking at the cancers that people were dying from then why not look at everything else that they were dying from, too. The plan quickly went from one cause of a few related diseases to many causes of many diseases.

At this point Chen returned to China where he began discussing this project with colleagues there to see if the fieldwork could be organized. Campbell started the long process of obtaining the funding. Work on both sides of the Pacific accelerated and focused on the details of a project of immense proportions and with the potential to rewrite the story of nutrition and chronic disease.

In the China Project History: Part 3, I’ll tell you about one more important encounter that was needed to set the course for this monumental study.