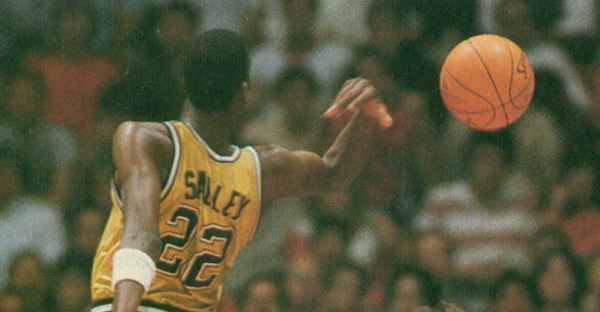 Recent NBA star John Salley sat by a pool in Los Angeles for a phone interview with Anne Ledbetter, Director of Education at the Center for Nutrition Studies. John shared freely about food, his athletic career and his passion for helping others “Live The Bettalife”.

Center for Nutrition Studies: How do you characterize your current diet?

John Salley: My current diet is a plant-based diet. It is not only plant based, it’s almost raw. I have eliminated a lot of oils out of my diet. I have eliminated as much olive oil as possible. I take a little bit of coconut oil and that’s about it. Mostly the vegan food I’m eating, the cooked food, is just cooked vegetables a little bit over 118 (degrees F). I’m at the point where I am making my own food as much as possible.

CNS: When did you start changing your diet?

JS: I started in 1991. I went into macrobiotics. I was a “lying” vegetarian for about 10 years. You know you eat things. You eat fish, and you eat shrimp, you eat cheese. You say you are vegetarian but you eat those things that come from an animal. That’s not a vegetarian. And I was on fish oil. And I couldn’t tell everybody this is the way it needs to be. I was aided and abetted along …so as opposed to becoming a crazy activist, I just decided to fight with my fork. It was fitting that they named the movie Forks Over Knives. I stay vegan and I eat a lot of raw food.

CNS: How was diet part of your athletic career?

JS: I went into macrobiotics my fifth year in the NBA, and I played 15 (years). I was a vegetarian throughout. And then in 1999 I really became a vegetarian. I really moved away from all the different things …started to really pay attention. I got into herbs and enzymes, and really just started paying attention to exactly how the body was working. And it became like a huge focus.

CNS: Has there been a difference in your athleticism?

JS: Oh my god. I had what they call “the acne” on my forehead. I had a compacted-colon. I had muscle spasms in my back. My body was trying to do its job and I compacted it with eggs and cheese and I don’t know. I put spinach in, thinking I was going to make it better. Then I went macrobiotic. I was 235 or 240 pounds. I went down to 219.

CNS: What kind of push back do you get from the athletic community?

JS: None. This is why. We don’t eat as a team. We’re all like individual companies. You eat where you eat. Some guys go off to, you know, steak houses. I wound up finding different places. I can go into a city and tell you where the best vegan food is. I’m on Instagram, I’ll put up a restaurant if I really like it and I will advertise it and write a little something about it. Because when you look on sites, they don’t even tell you what the vegan options are. I don’t do negativity. You wouldn’t hear a bad review anyway because it’s no good…I tell people to do well and good at the same time!

CNS: What is it that you get excited about when talking about nutrition?

JS: I guess dispelling all the myths and telling people there’s a new found way, and that things have been hidden. Explaining how words are hidden and how ‘they’ make you believe that’s what it is. People say things like, ‘well I get my calcium from milk’ and ‘they call meat protein.’ It’s a set up. I don’t know anyone that’s been to the hospital for protein deficiency. I guess you can be protein deficient, but I don’t know anyone that is! You feel if you eat the animal you’re going to be as strong as the animal, but I just don’t see how that works.

JS: Like I was explaining to someone yesterday. (I asked) “Would you get down on your knees if you were thirsty and go down to the tit of a cow and suck the milk out of it?” And they said “No.” I said “Why not?” They said “That’s what cows do”… It’s cow milk. It’s for cows. It doesn’t make a lot of sense. But ‘they’ convince you that the cows are beautiful and that they like it. Right? …I get happy to explain what the truth is. I get to talk about eggs being 100% cholesterol. ..And a lot of people say “Man, you’re not afraid to say that?”Jesus said “The truth will set you free.” I’m going to go with what Jesus said.

CNS: Can you share with us some of your other passions?

JS: How does the saying go? Finding your gift is the meaning of life. Sharing your gift is your purpose (Pablo Picasso). So I found a better life. I even named my company that. “The Bettalife Challenge” I said “Betta” because it was cool, it was Ebonic. Better eating today, tomorrow, always. www.bettalifechallenge.com

So I challenge people for 22 days to eat a plant-based diet, drink clean water, walk, breathe, relax, rest… So I’m putting together my retreats now to help you find new places to go, literally getting off of the treadmill and out of the rat race. Disconnect from the matrix for five days. The world will be the same when you come back, but you will be stronger, you’ll see the world from a different perspective…

One more thing I’m passionate about. We talk about all this healthy stuff and you know I am in the beverage industry (The Vegan Vine).

Having your name associated with The Vegan Vine wine, this is where I got so much pushback. I went to Texas and this guy said “You have to take that word (vegan) off of there.” I said “I don’t have to do anything.” So all I did was redesign the bottle. We made the bottle ten times sexier. The word is still there.

Let me tell you what. I have the utmost respect for T. Colin Campbell after watching Forks Over Knives. You look toward your elders for leadership. For him to stand up and say we were wrong, we have to change this and this is what it is, it’s amazing. Men don’t do that. Men will go to their dying graves saying that the world is flat and killing people for saying that it is round. It takes the ‘stand up people’ to say the world is round, and then we find out that it is! For Colin to say that we are killing ourselves and we’re killing our country— I was honored to meet him and to present him with an award. They say the pioneers get the arrows.