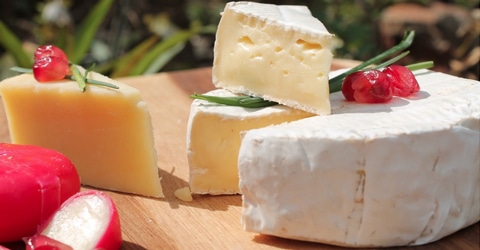 In the US, nearly one in five children (ages 2-19 years) are considered obese—not merely overweight, but obese. This disturbing statistic has become a reality due to a bevy of societal factors, but some studies have shown that the current USDA Dietary Guidelines are not helping. The inclusion of dairy as a food group and the aggressive recommendation of three servings of dairy a day may be contributing to the expanding waistlines of American youth (and adults as well). A 2012 literature review attempted to pinpoint the biological link between early dairy consumption and childhood obesity, and author Bodo C. Melnik found strong evidence to suggest that the leucine found in cows’ milk—and cows’ milk-based infant formula— is the culprit.

Those familiar with bodybuilding may be familiar with leucine, as it is often touted for its muscle-building properties. This is why milk, or chocolate milk, is often marketed as a recovery food, as dairy contains a 50 percent higher concentration of leucine compared to human breast milk. While this amino acid does help stimulate the growth of muscle mass, it also has a pivotal effect on mTORC1 (mTOR1). Simplistically, mTOR regulates the growth of a cell, and leucine stimulates mTOR into action. The result, according to the review, is increased insulin resistance, fat formation, and leptin resistance.

Cheese is the largest source of saturated fat intake in America.

When leucine signals mTOR, a series of interactions occur that result in the addition of a phosphoryl group to the Insulin Receptor Substrate-1 (IRS). This additional phosphoryl group makes the IRS receptor less responsive to insulin, and insulin resistance sets the groundwork for metabolic syndrome and diabetes.

mTOR is also responsible for the division of fat cells and the formation of new cells. When activated by leucine, mTOR plays its part by creating these new fat cells—which can ultimately result in noticeable weight gain. The review also found a link between mTOR stimulation and lipid formation as mTOR plays a key role in the production of enzymes that support the creation of lipids. In essence, even if one consumes skim milk, this non-fat milk may still trigger fat cells to form.

Finally, leucine—by way of mTOR activation—influences leptin expression. Leptin is a hormone that signals the brain when you are full. While mTOR actually causes fat cells to create leptin, researchers have found that those who consume high-fat diets are actually more resistant to leptin. Considering the fact that Americans eat more than double the amount of cheese they did in the 1970s, it’s no surprise this resistance exists, considering the fact that cheese is the largest source of saturated fat intake in America. When leptin is suppressed, our hunger cues are off, causing us to eat past the point of fullness and take in excess calories that may contribute to extra pounds on the scale.

The milk marketers actually aren’t wrong—milk makes us grow. However, when that growth becomes obesity, we may wish to put down that glass of two-percent and say “hold the cheese” during our next to-go order. Mothers especially should consider breastfeeding instead of opting for dairy-based infant formula. The best food for a baby isn’t from another species—it’s from their mother.