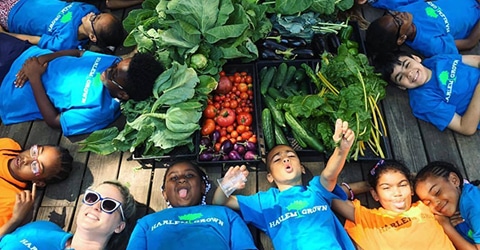 The following is an excerpt from a T. Colin Campbell Center for Nutrition Studies online course.

“I was in business, doing well, and I was totally unaware of the situation and the plight of others in communities such as this. I’m not from Harlem. I don’t live in Harlem. The majority of the kids live in single-parent households. The majority of the children are on food stamps. The majority of the children are in transitional housing. It was something I never knew existed. I find there’s over 110,000 homeless children in New York City and they reside in communities just like this. There’s a disproportionate number of homeless shelters right around here, and these children go to these schools. I just had to do something! So I got off the couch and took the subway ride to Harlem. I walked into the school, told the principal ‘I am here to volunteer,’ and that’s how it all started.” – Tony Hillery

The term “food desert” refers to an area where there is no green space, grass, or soil. There are over 50 fast food restaurants, 29 pharmacies, and no affordable food options in the three-block radius of the Harlem Grown urban garden. Where do you access healthy, organic food? Children in the lunchroom, when I started working with them, couldn’t even identify vegetables, no less eat them. Just have a general conversation with the kids and ask them about vegetables. They can identify a tomato and a carrot, hands down. Broccoli on a stalk, 50/50. Everything else is salad. And they don’t eat salad!

“We plant vegetables here, but most importantly, we grow healthy children and sustainable communities.”

What Are Food Deserts?

After cleaning up an abandoned community garden with the children’s help, one of them said, “Why don’t we plant something?” So, we bought a load of organic soil, 400 seedlings from the clearance rack, and we planted them. The kids would come back to look and take care of their plant and bring their mothers. They took such pride in their plants. Then, in May, early June, plants started to bloom and you could see the kids nibbling their plant and saying, “Wow, this is the most delicious thing I’ve ever tasted!” That first year we grew about 38 pounds of produce. We have a simple formula here, that if they plant it, they will eat it. Eight out of ten times if they eat it, they like it.

Harlem Grown is an independent, non-profit organization whose mission is to inspire youth to lead healthy and ambitious lives through mentorship and hands-on education in urban farming, sustainability, and nutrition. Founded in 2011 by Tony Hillery, they operate local urban farms, increase access to and knowledge of healthy food for Harlem residents, and provide garden-based development programs to Harlem youth.