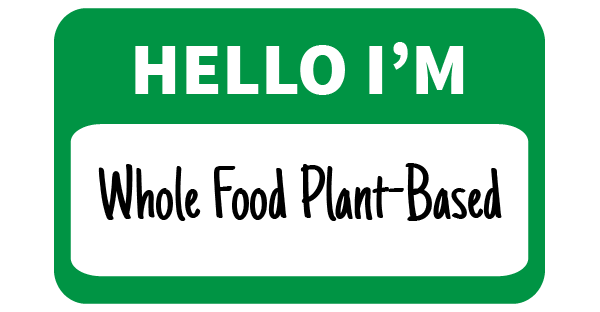 Vegan, Plant-Based, or… What Label Works?

Vegan and Whole food, plant-based (WFPB) are the terms most widely used. But for many people, which phrase to choose isn’t so simple. “I use vegan, but it can be a problem because many people infuse their own meaning into the term,” explains registered dietitian Jack Norris, RD, the executive director of Vegan Outreach. The group has distributed 14 million pamphlets on college campuses nationwide. “So, using vegan a person might think they know what I mean, when they actually don’t.”

For people who aren’t plant-eaters, vegan and vegetarian are often perceived to be the same thing. Since being vegetarian means you eat dairy and being vegan means you don’t, to someone who avoids animal foods, a vegetarian dish is the last thing they want. So they are quick to make a sharp distinction between the terms.

Word choice can also depend on the factors that drive this lifestyle. “For some people, it’s their health, for others it’s the environment and for others, it’s the ethical treatment of animals,” points out cardiologist, Dr. Robert Ostfeld, MD, the director of the Cardiac Wellness Program at Montefiore Medical Center in New York City. The continuum that drives plant-based eating moves in both directions, and people jump in at any point and often evolve to embrace the other motivations as well.

But the strongest driver may be what dictates the words they use. Someone who is sensitive to animal suffering may prefer vegan because whole food, plant-based eating doesn’t emphasize the moral aspect. Of course, if a person doesn’t identify as an animal rights activist, they may not want to call themselves vegan if they perceive that that’s what it means.

T. Colin Campbell, PhD, co-author of The China Study notes that he is reluctant to use vegan, or even vegetarian. He explains that the v-words can connote an ethical ideology that can be polarizing, and therefore limiting. Whole food, plant-based, (a term that Campbell coined in the early 1980s) describes a diet in its ideal form—with an emphasis on avoiding processed plant foods high in added fats and refined carbs.

“I don’t like to use vegetarian or vegan because, from a nutrition standpoint, they are only defined by what you don’t eat,” points out Dr. Michael Greger, MD, the founder of NutritionFacts.org and author of How Not To Die. “When I spoke on college campuses, I would meet vegans who appeared to be living off French fries and beer. They were technically vegan, but what they were eating was not exactly health promoting. So I prefer using whole food, plant-based nutrition.”

“I use whole food, plant-based because it most accurately describes how I would like my patients to eat,” says Dr. Ostfeld (Twitter @DrOstfeld). “Vegan can go beyond eating and describe a lifestyle that resonates with some, but doesn’t with others. I prefer to cast a wider net.”

Which Term is Most Practical?

On the other hand, vegan has a nice simple ring to it. It’s short, catchy and memorable. Plus, it can be an adjective or a noun. Also, vegan works for other products like clothing and makeup. Although it can imply the philosophy of veganism, it can also be completely objective. “I like the term vegan because it means what I want it to mean: ‘no animal products’,” says Dave Greene, a network engineer who directs the New York City Vegetarian and Vegan Meetup group that has over 9000 members. “But, if the aim is to encourage more people to be vegan, we should use the term that is most effective. I’m waiting for more research on which term is best.”

Although WFPB seems to be preferred by health professionals, it could also be a turn-off: “I would wager that using whole food, plant-based might be worse than simply saying plant-based because it sounds harder to accomplish and perhaps seems too healthy and, therefore, unappealing for some,” says Nick Cooney, director of education for Mercy for Animals.

So, might plant-based be the best term to use?

Perhaps. Except the concept appears to have been co-opted by many in the non-vegan world. Well known nutrition expert, Dr. Marion Nestle, PhD, author of Food Politics and What To Eat, was quoted in the San Francisco Chronicle re-defining the term: “Of course I favor plant-based diets. Such diets are demonstrably better for health and kinder to the environment. But plant-based does not necessarily mean vegan, which entirely excludes animal products.”

Plant-based doesn’t sound like it means meat-, fish- and dairy-free. “The phrase can be loosely interpreted by the consumer and I suspect that a lot of people assume that they are plant-based as long as they eat vegetables regularly,” points out registered dietitian Susan Levin, MS, RD, the director of nutrition education at the Physician’s Committee for Responsible Medicine (PCRM) in Washington, DC. “Any terminology that implies moderation can be tricky: A cup of broccoli with a cup of melted cheese on top could be called plant-based.”

And that might be OK if the larger goal is to get people to start by eating more whole plant foods and fewer, rather than no, animal foods. And to that point, vegetarian, defining a diet that is not animal-food-free, is used by many animal rights and strictly-vegan organizations, including People for the Ethical Treatment of Animals (PETA). In their short film, Glass Walls, narrated by Paul McCartney, he opens by saying “If slaughterhouses had glass walls, everyone would be a vegetarian.” Actually, in a perfect world, someone who cares about animals would never be a vegetarian since dairy cows and egg-laying hens suffer terribly.

So why the disconnect?

It’s all about marketing: Cooney, also the author of Change of Heart and Veganomics notes, “I think it’s OK to use terms that make it less daunting for newbies. We need a larger tent, not purity.” Mercy for Animals is a nonprofit that sends undercover investigators into factory farms to expose the treatment of farm animals. In a blog post about the “v-word” (http://www.mercyforanimals.org/v-word) they explain: “Sometimes we use ‘vegetarian.’ At other times we encourage people to ‘cut out or cut back on meat.’ Our goal is to create as much dietary change as possible in order to spare as many animals as possible from the misery of animal agriculture. To achieve that, we have to be willing to sometimes ask for less than we really want.”

It’s thought that more people will eat fewer animal products if they don’t have to be all-or-nothing about it. Cooney, explains “Vegan and, even vegetarian, can have negative connotations. So when we recommend to ‘cut back on meat’ we avoid those identity issues.” Eating less is easier than eating none, and their research has shown that using phrases other than vegan are more appealing. “It would be easier if we could always use the term vegan. But it would not be in the best interest of the animals,” says Cooney. Encouraging baby steps may be the most realistic approach since most people do not make radical changes overnight. “Even if they get only 50% of the way there, it is better than 10%,” points out Dr. Ostfeld.

Taking Back the Term Vegan

But the term vegan has strong advocates. PCRM chooses low-fat, vegan diet when discussing their therapeutic approach to eating. “We choose vegan over whole food because, even though, yes, whole foods are better than processed, studies that show the benefits of vegan diets over others find that people still do better regardless of how ‘whole’ the diet is. So, if we can get people to cut out all the animal products, they are still giving themselves a huge health advantage,” says Levin. “People may not be very comfortable hearing the word vegan, but with the current state of America’s health, it may be time to hear things that aren’t familiar and comfortable,” explains Levin (Twitter @LuckySlevinRD).

“People often perceive—rightly or wrongly—that using the term vegan will turn people off,” says Greene. Even if vegan isn’t the best word to entice people to start an animal-free diet, it’s worth finding out what makes them stick to one. “There is fairly convincing evidence that people who go vegan for health reasons more often than not go back to eating an omnivorous diet,” says Norris, also the creator of VeganHealth.org. People who are vegan for the animals may have a deeper conviction that makes it easier to resist a relapse.

Renee Sonnen, the wife of a cattle rancher in Angleton, Texas convinced her husband to go vegan and turn their 96-acres into a farm-animal preserve ( http://rowdygirlsanctuary.com ). She described her feelings one year later, “I do not believe that vegans ever fall off the wagon if they are really vegan for the animals. One may go plant based for diet and falter, but there is no way I could ever eat an animal knowing what I know—it would be like eating my best friend for dinner, or my mother—what a sad state of affairs our world is in that it teaches us to eat the flesh of other sentient beings and to teach this same barbaric ritual to others.”

Placing the Emphasis on Plants

Of course, this type of born-again vegan passion can be off-putting to a person who still eats animal foods and hasn’t had an aha! moment inspiring them to fully empathize with the plight of the animals. Firefighter Rip Esselstyn, founder of the Engine 2 products (Twitter @Engine2diet) keeps his talk objective using the phrase “plant-strong.” “This term is inclusive and it doesn’t alienate people. Plus it means that you are eating healthfully,” he says. He distinguishes between the diet that he promotes and a stricter version promoted by his father, Cleveland Clinic cardiologist, Dr. Caldwell Esselstyn, MD. “Plant-strong is for those who can have overt fat such as nuts, seeds, avocados, and tofu, and plant-perfect is for those dealing with heart disease or other conditions who have to be more discreet with fat consumption and so eliminate nuts, seeds, avocados, and tofu,” he explains.

There may be no one perfect term. Vegan is convenient for food labels. But a term that alludes to the healthiest form of the diet such as whole food, plant-based or plant strong may be more useful in some contexts, like medical and nutritional research. And for those who attach deeper meaning to how they eat, perhaps an adjective is called for: ethical vegan or environmental vegan. “I think being purist about terminology can be a distraction,” says Dr. Ostfeld. “We need to pitch to our batter. And the terms can be seen as aspiration, where one could use them as a motivating force.”

It’s very clear that, despite what one chooses to call it, the movement is growing, and enough for industry to take notice. As the general culture becomes more familiar with the foods, and as more people encounter vegans among friends, family and co-workers—and witness their health transformations, and as an increased awareness develops for farm animals, whole food, plant-based eating may be embraced by a majority, rather than a minority. And the term vegan may end up being perceived in a positive light by all.