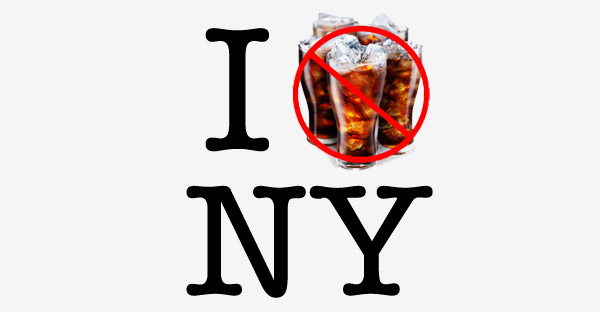 During his last ten years as the mayor of New York City, Michael Bloomberg has been the first mayor that banned smoking in bars and restaurants, banned restaurants from using trans-fats, and required chain restaurants to post calorie counts on their menus[1]. His crusade to better the health of New York City continued last year, when Bloomberg attempted to prohibit restaurants and business from selling sodas larger than 16 ounces. A month after his proposal, the New York City Board of Health voted 8-0 in approval of the idea, but was quickly harassed for their unanimous decision. The National Restaurant Association, American Beverage Association, National Association of Theatre Owners, etc. filed a petition against Bloomberg and the Board of Health[2], arguing that this type of legislature was above the powers of Bloomberg and the Board of Health. Although this controversy is a year old, it is still worthy to revisit and to critically examine.

Proportion sizes have increased over the last 30 years while childhood obesity rates have tripled. In the Journal of Nutrition, Piernas and Popkin measured how children’s junk-food habits changed within the span of 30 years. They found that soft drink portions had increased by a third[3]. Limiting the amount of sugary drinks served in restaurants would have discouraged the consumption of soda, in hopes that obesity rates would decrease as well.

Despite the good reasoning, the court ruled against Bloomberg. It did not argue the significant scientific reasoning for the proposed policy, however. Instead, the main argument against Bloomberg was the political abuse of power to regulate public health, which belonged to legislature. The beverage industry argued the city’s New York City Department of Health and Mental Hygiene should have gone through the elected city council. The court focused more on the law’s loopholes, which exempted businesses not under New York City’s health department[4], such as grocery and convenience stores, rather than the potential health risks associated with sugary drinks. Only food service establishments (restaurants, fast food joints, stadiums, theaters) would have been affected by this policy. In addition, only certain beverages (those that exceed 25 calories per 8 ounces, are less than 50 percent milk, and are not alcohol) would have been limited. Many citizens argued that limiting the amount of soda served at restaurants is a violation of their right as a consumer. However, Bloomberg’s policy did not hinder the freedom of buying soda. A customer could buy an infinite number of refills, just 16 ounces at a time. This inconvenience would have hopefully prevented and decreased the consumption of soda.

The court was not the only one to argue against Bloomberg’s policy. The New Yorkers for Beverage Choices, a coalition of individuals and companies, petitioned against the ban as well. Restaurants and retailers, including Coca-Cola, PepsiCo, and McDonald’s, stated that it was “a discriminatory policy that could hurt certain businesses while rewarding others” and continued with, “The fix was in from the beginning, and the Mayor’s hand picked board followed their orders by passing this discriminatory ban”[5]. The organizations opposing Bloomberg’s policy, however, were those of major beverage companies who would lose business if it had passed. These monopolistic corporations hold too much power and influence among the community and their efforts to “protect” the rights of consumers may just have been covering up their direct financial interests. In other words, these corporations had no interest in the health of their customers, but rather, they were too concerned about the monetary consequences that would harm their commerce.

In fact, they were the representatives of these major corporations who were petitioning and posting advertisements of this controversial subject. However, where did the controversy begin? The beverage industry, like Big Tobacco, fueled feelings of injustice within the public. They created the argument that consumer rights were threatened, when, in fact, no rights were violated. They manifested this controversy without acknowledging the science and research behind the proposal to save their businesses.

Despite the political problems associated with Mayor Bloomberg’s failed policy, his theory and intentions were much needed. The limitation on soda represents an advancement to stop the obesity epidemic and signifies a step toward better health for the community. The failure of Bloomberg’s proposal also acknowledges how much power is given to corporations that were involved. His policy should be revisited and additional policies should be implemented to improve the general well being of society and to protect its health rather than fuel the profits of corporation.