Topics » Environment & Sustainability » Can Eating Less Meat and Dairy Help Save Our Planet? All Signs Point to Yes. 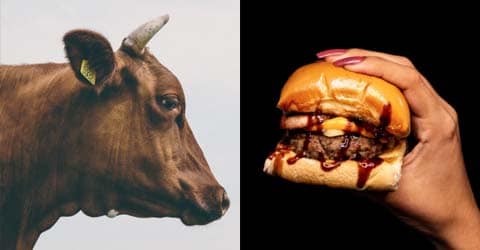 Can Eating Less Meat and Dairy Help Save Our Planet? All Signs Point to Yes.

Our earth is suffering deeply. Air pollution, ozone layer depletion, coral reef degradation, climate change, deforestation, temperatures rising, wildfires…and these are just to name a few. While it may feel like saving the planet is out of your control, there is something you can start doing today to help relieve our climate woes: reduce or eliminate your intake of animal products.

Modern-day farming, known as factory farming, is causing mass environmental degradation. While a lot needs to happen to reform farming in America (for reasons not limited to the environment), humans can effect change immediately by ceasing to support the industry. And you can do this by going plant-based. If we don’t take action and do our part to contribute in incremental ways, humans will continue to deplete Mother Nature’s natural resources and every species will pay a lofty price.

According to scientists, “without meat and dairy consumption, global farmland use could be reduced by more than 75%.”

What is factory farming and why is it so destructive? First, it is important to point out that 99% of agricultural animals today are raised on factory farms. Yes, that means nearly all the meat and dairy products in the United States originate from this system. Factory farming, also sometimes referred to as intensive farming, is a system that uses extreme confinement of livestock to maximize efficiency and yield a higher volume of product at a lower cost. The idea first came about in the 1960s, when scientists invented agricultural techniques to maximize production to meet increasing demand for meat, eggs, and dairy. Today, factory farming is the main system for animal agriculture, and it’s also one of the greatest environmental hazards.

This intensified system of farming pollutes the environment, contaminates water and soil, and negatively impacts rural communities living around these “farms.” One of the most concerning environmental aspects of factory farming is the extreme amounts of greenhouse gas emissions it produces. Greenhouse gases, which are gases that trap heat in the atmosphere, contribute to climate change. Climate change has already had observable effects on the planet, from sea ice loss, to accelerated sea level rise, to increasingly intense and longer heat waves.

While there are different types of greenhouse gases — the majority of which are produced by human-initiated activity — there are three main greenhouse gases emitted in the factory farming process: methane, nitrous oxide, and carbon dioxide.

Methane — also released in the production and transport of coal, natural gas, and oil as well as decay of waste in landfills — results from livestock and other agricultural practices. Methane is released by animals during digestion; it is also released by manure as it decomposes. And when there are 1.6 billion farm animals on 25,000 factory farms in the United States, that translates into an immense amount of methane. One hog, for example, “…produces roughly one and a half tons of manure each year, [and] their combined manure in a county can meet or exceed the equivalent weight in human sewage of major metropolitan areas,” according to Food & Water Watch’s Factory Farm Nation: 2020 Edition report. The report also notes that “Together, these animals produce an estimated 885 billion pounds of manure each year, polluting our air and water and releasing climate-warming emissions.” Even the U.S. Environmental Protection Agency attributes increasing amounts of methane into our environment as a result of the shift toward confining pigs and cows in larger facilities using liquid manure management systems, or “manure lagoons.” These are football-field-size vats that hold animal excretion. These manure lagoons not only release methane, the livestock waste and remains are also dumped into rivers by farmers, further polluting water and creating a toxic ecosystem.

Nitrous oxide is emitted during farm-related industrial activities, during combustion of fossil fuels and solid waste, as well as during treatment of wastewater.

Carbon dioxide (CO2) is considered one of the most potent greenhouse gases. CO2 is released from burning fossil fuels, like coal and petroleum, as well as from deforestation. As for animal agriculture, CO2 results from certain crops grown for animal feed, called “high-energy crops,” such as corn since it’s dependent on large amounts of chemical fertilizer. Annually, more than 36% of corn and 50% of grains grown in the United States are used to feed animals raised and slaughtered for human consumption. Factory farms also require an immense amount of fossil-fuel-based energy to heat, cool, and ventilate facilities. Not to mention the energy required to operate machinery to cultivate and harvest feed crops for animal feed.

Other animal-agricultural-related contributors are processing and packaging slaughtered animals; deforestation for animal agriculture and clearing land for feed crops and for grazing, which releases CO2; and desertification, which is the grazing of pastures that can prompt fertile soil to dry and then release CO2 into the atmosphere. Another issue is water: According to the EPA, animal agriculture is the leading cause of water pollution. And it takes up to 1,800 gallons of water to produce one pound of animal meat.

One solution to stave off the factory-farm-induced climate destruction is to not support the industry and to choose plant-based foods over animal products. According to scientists, “without meat and dairy consumption, global farmland use could be reduced by more than 75% — an area equivalent to the United States, China, the European Union, and Australia combined — and still feed the world,” The Guardian asserts in a deep-dive article that avoiding meat and dairy is the “single biggest way” to reduce your impact on the environment. “Only 18% of meat and dairy and 37% of protein accounts for all of the calories that occupy our bodies at the expense of 83% of all farmland.” Easily, switching to a plant-based diet and eating less meat are just small pieces of this giant puzzle. But it’s a critical piece. Is it practical to eat a plant-based diet, though? The answer is yes, and research shows that people who maintain a plant-based diet have reduced inflammation, improved cardiovascular health, more muscle, and more energy. What’s more, the accessibility of plant-based foods and alternative protein sources has never been more abundant and accessible.

If we don’t change our ways and begin implementing plant-based meat and dairy alternatives as the primary sources in our diets, climate change will continue to create an imbalance in the environment and the planet, risking our lives and the lives of all species.

When we disrupt and exploit the biosphere, the consequences are tragic. Environmental advocate Bill Tara said it best: humanity has a “casual disregard for the environment.” The factory farming system that has become “casual” and lulled our society into complacency will be our demise if we don’t change. When will we wake up and take action that will leave a lasting footprint on the planet, the animals that inhabit it, and ourselves?