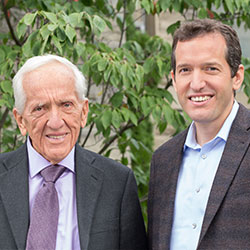 The following video answers a student’s question from our October 2014 Campbell’s Office Hours Webinar that was provided for current and past students. Drs. Campbell get many questions during webinars and they answered this question post-webinar.

Tom: Hi I’m Dr. Tom Campbell, I’m the executive director of the Center for Nutrition Studies, I’m a practicing family doc and this is my dad.

Colin: And I’m Dr. T. Colin Campbell, I’m the founder of the organization and I’m helping them run the program.

Tom: So we had a few questions we couldn’t get to from our last office hours and we want to answer them now. So here’s another question.

What factors do cause disease in animal foods if it’s not saturated fat? So we’ve heard about saturated fat being ok. Is it then IGF-1, is it the sulfur containing amino acids, the mTORC1 activation by proteins, arachadonic acid, cholesterol, all of the above?

Colin: No, it’s getting into too much detail to talk about IGF-1 and all these other factors that may be present other than that, other than saturated fat, the really important thing in my view is animal protein. That’s the story that’s been ignored for more than a hundred years. Way back when when they were first studying the question concerning factors of diet that cause atherosclerosis for example they were at that time discussing is it the fatty or lipid part of the diet or maybe it was the protein. They made a conclusion in 1920, serious researchers (did), it was more about animal protein than it was about cholesterol or fat. That all got forgotten, but so, in reality, I think we’ve gone down the track too much one way.

Tom: But I would also caution you, of course it’s not just about the protein either, it’s about the lack of antioxidants, the lack of fiber, the lack of vitamins that are in plant food. So it’s the combination of all these factors taken together that work together to affect health and disease. But regarding the protein thing, one last little comment there to translate that; I see patients all the time who are trying to be heart healthy by avoiding the high fat foods, like “I don’t eat much beef any more, it’s much more chicken” and when I tell them that they’re probably not doing a great service for their cholesterol levels for example, and we talk about how to lower their cholesterol and I mention something that animal protein, protein itself has been shown over many years to increase cholesterol levels, that is always a big surprise. It’s always a big shock, but yet, it’s been shown many many times.

Colin: You know, that’s my point from before. That animal protein has been shown for many many years a very significant inducer of higher cholesterol levels; more than saturated fat and that’s being ignored. But there’s another part of that question. So when they’re increasing the protein, decreasing fat maybe and increasing the protein, that tends to, especially if it’s coming from animal food, that tends to depress the consumption of the foods that have the antioxidants. So it’s a combination of all the stuff going on together.