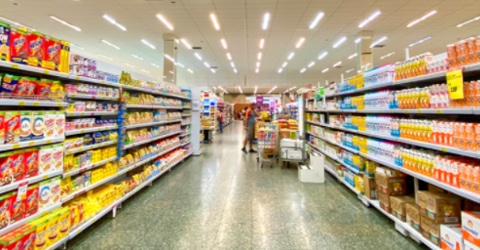 The following is an article from the Community Grants, “Food Is Political” series.

What do you think of when you hear the word “desert”?

I think of a barren landscape devoid of life, vibrancy, and abundance. And what about food desert? The term is widely used in the US to describe places with low access to food. According to the USDA, food deserts are areas characterized by large proportions of households with low incomes, inadequate access to transportation, and a limited number of stores offering healthy groceries at affordable prices[1]. As of 2019, approximately 23.5 million Americans live in such places[1], with dire consequences. Low access to food has been associated with increased risk for obesity and heart disease outcomes[2][3]. Geographic location and cost of food are among the top barriers for Americans to purchase healthy food[4][5].

However, the term food desert doesn’t accurately describe the landscape. Detroit food activist Malik Yakini notes several reasons why the term is problematic[6]. First, many individuals living in these areas do not, and never would, refer to their communities as food deserts; it is a term imposed on them by outsiders[6]. How would you feel if an outsider, perhaps a high-brow researcher, came into your neighborhood and labeled it a food desert? I would feel like they weren’t seeing the history, resilience, and successes of my community, but only the struggles. Second, the term naively assumes that the problem is a scarcity of food in general. While food deserts do lack supermarkets and grocery stores, there’s often an abundance of convenience and corner stores[6]. These stores sell sugar-sweetened beverages, high-fat snacks, and other processed foods at affordable prices[7]. Meanwhile, there’s a scarcity of fresh produce, which is priced much higher than at a grocery store[8]. Third, the term food desert implies that the lack of healthy food in these areas is somehow analogous to naturally occurring ecosystems, but this could not be further from the truth[6]. As Yakini puts it, “public policy and economic practices have created these areas that have low access to foods, and food desert does not speak to that intentionality.”[6]

What do you think of when you hear the word “apartheid”?

The word apartheid holds historical significance to many of us; it represents the man-made political and economic systems that have discriminated and segregated South Africa based on race[9][10]. These systems continue to perpetuate unequal access to resources and networks, allowing some communities to grow and thrive while starving others[10]. The term food apartheid more accurately describes what it means not to have food access in the US. Activist Dara Cooper describes food apartheids as the, “systematic destruction of black self-determination to control one’s food, hyper-saturation of destructive foods and predatory marketing, and blatantly discriminatory corporate controlled food system that results in [communities of color] suffering from some of the highest rates of heart disease and diabetes of all time.”[11] And when Dara specifies Black self-determination and communities of color, she is intentional with her words. While many would prefer to keep race out of discussions about food and unequal access, she understands that the two subjects are undoubtedly linked.

Grocery store availability is associated with both income and race[12]. Additionally, the presence of fast food restaurants depends more on the racial makeup of a community than on the income level[12][13]. And this disparity in food access is not the result of natural processes; it is the result of malicious capitalistic forces that followed the flight of White people from inner cities. Following the Civil Rights movement in the 1960s, many White families moved from inner cities to the suburbs, out of fear of continuing uprising[14]. With them went many grocery stores’ business and large segments of urban job markets[14][15]. Many low-income communities of color living in inner cities today are still struggling against the consequences of that White Flight. They struggle against both a lack of access to healthy food and limited employment oppertunities[16].

The boom of fast food franchises, which saw the decline of property values as a way into new markets, compounded these challenges even more. Following White Flight, McDonald’s not only expanded their restaurants into the inner cities, but also provided Black ownership of franchises and used racially-targeted marketing to increase demand among Black communities[14][17]. The net effect of these efforts is complicated. While franchises do create jobs and spaces for communal gatherings, they also maintain cultures around unhealthy, addictive foods and fail to provide living wages for their workforce and therefore perpetuate higher poverty rates[14]. The health consequences of these conditions, on the other hand, are definitive; Black individuals face the highest rates of obesity and heart disease, lifestyle diseases linked to diet and food access,[19][20][21] of any racial or ethnic group in the US[18].

What does it mean to not have access to food in the US?

Unfortunately, food access in the US is a game of economics, and it has been fueled by racial and class discrimination. A disproportionate amount of Black, Brown, and poor white people lack access to healthy and affordable food[6]. It is nothing like a naturally occurring desert; it is much more similar to apartheid. As Yakini puts it, “the struggle for food justice has to be tied to the struggle for economic justice.”[6]. Therefore, solutions must address economic injustices and a long history of discrimination. We cannot simply plop a grocery store into a community and expect everything to change for the better. Justice for communities that have been denied access to healthy, affordable food must start with reinvesting in education and job opportunities in neighborhoods historically discriminated against. So, how can we act as individuals to move towards more equitable access to food? We can start by calling the problem what it is: not a food desert, but food apartheid. Words matter, and when we are intentional with our voices, the actions of ourselves and those around us change.

Read more articles in the “Food Is Political” series:

Corn: How Industrial Agriculture Ruined a Sacred Seed
What is Food Sovereignty? 3 Steps for Taking Back Ownership of Our Food
Sowing Seeds for the Next Generation – Why We Need Sustainable Farming

What is Food Sovereignty? 3 Steps for Taking Back...

Sowing Seeds for the Next Generation – Why We Need...