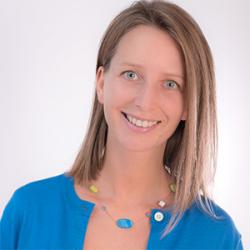 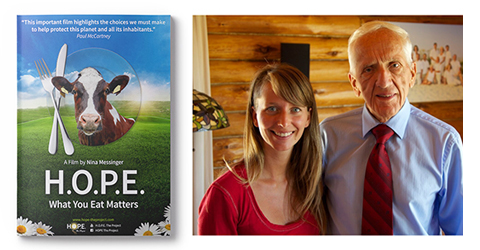 HOPE What You Eat Matters is an award-winning plant-based documentary uncovering and revealing the effects of our typical Western diet on our health, the environment, and animals. Featuring Dr. Jane Goodall, Dr. T. Colin Campbell, Dr. Caldwell B. Esselstyn, Dr. Vandana Shiva, Dr. Melanie Joy and many other experts, the film is now free to watch all over the world. The following is an interview with the film’s director and producer Nina Messinger.

How did you become interested in Dr. T. Colin Campbell’s work?

I became interested in Dr. T. Colin Campbell and his work through his book The China Study in 2010. A year later, I watched the movie Forks Over Knives with its plea for a whole food, plant-based diet. My curiosity and desire to interview Dr. T. Colin Campbell grew and I knew that his insights and expertise would be an important component of my film. I am particularly impressed by his immense knowledge of the nutrition-related causes of the epidemic spread of civilization diseases and his unflinching and incorruptible search for truth in the service of humanity. 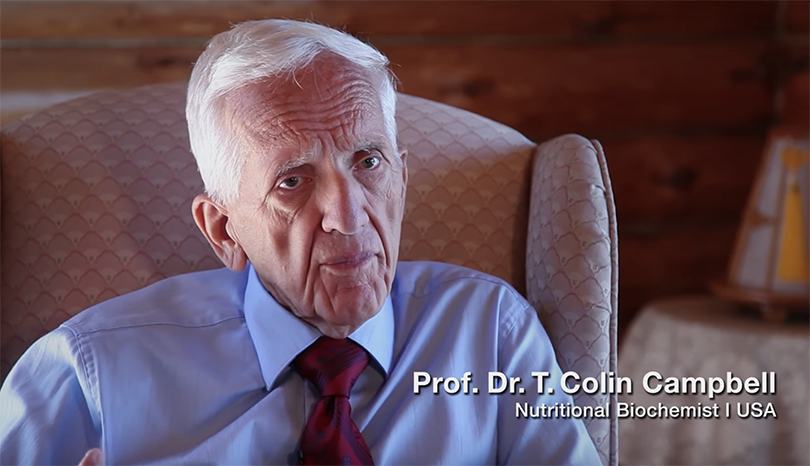 What inspired you to make this film?

I found it fascinating to see how much we humans can achieve by changing our diet – for our health, as well as for all beings and the environment. There have already been many important films made about the destruction of the environment by the agricultural industry and about the harmful health effects of an animal-based diet. However, a key component, that I felt was missing, was the perspective of the animal abuse by the agricultural industry due to greed. So I decided to make a comprehensive film to show both the power of the individual as a consumer and the far-reaching consequences of consuming such products. I wanted to make it obvious that an animal-based diet harms everyone – that it endangers our health, creates incomprehensible suffering for animals, destroys our environment, promotes global hunger and forced migration. I believe that recognizing these relationships is crucial for the psychological as well as the physical survival of humanity. These challenges have motivated and inspired me to make my film. Too many people are unaware of these important connections. My goal is to help people realise that each one of us can have a tremendous impact through our daily actions of shopping as a conscious consumer, choosing organic products, and eating a whole food, plant-based diet. These daily actions have the ability to create positive change on a global scale and make this world a better place for all.

What was the most rewarding aspect from producing this film?

Producing this film has had many rewarding aspects! I am very grateful for all of the stimulating and informative conversations that I was able to have – with internationally renowned experts such as Dr. T. Colin Campbell, Dr. Caldwell B. Esselstyn, Dr. Jane Goodall, Dr. Vandana Shiva, Dr. Melanie Joy or Dr. Marc Bekoff. Just as rewarding have been the conversations with farmers and people from all walks of life, who have recovered from severe illnesses, simply by changing their eating habits. These encounters and conversations have led me, my family, my team and those people who have watched my film to become more conscious of what they eat. I was also able to experience the blessing of seeing my own father’s health improvement through switching to an organic, whole food, plant-based diet. He radically changed his diet during the making of my film in 2012 after a cancer diagnosis. His condition improved and he is fine today despite the negative prognosis of doctors and his refusal of conventional cancer treatment.

What is the greatest surprise or challenge you faced producing this film?

Probably the greatest challenge I faced producing this film was the extreme difficulty of obtaining filming permits for factory farm facilities. This problem did not occur with vegetable or fruit farmers. I found that questionable and surprising at the same time. Should we not all have the right to see how and where our food is being produced? If we are not allowed to see how our food is made, do we really want to eat it?

What made you decide to release the film to the public for free of charge?

I decided to release the film to the public for free because of my original intention of making this film and its message accessible to as many people as possible. I want to save the lives of innumerable people, animals and contribute to the protection and preservation of the basis of our existence, which is nature. Now everyone has the opportunity to watch the film on the Internet anytime, anywhere, to embed it on his/her website, to share it on social media sites or to organize free screenings.

What do you find most inspiring about the plant-based movement?

The plant-based movement has inspired me because it takes a significant step beyond the environmental movement and towards the whole of creation. While the environmental movement was still primarily focused on the limited and often shortsighted interests of humans, the whole food, plant-based movement has recognized the complex interactions between all areas of our being. It no longer defines man as the pinnacle of evolution, but as part of creation. For me, this is an essential building block for a truly sustainable future.

What is your goal or dream for the plant-based movement?

My dream is that the plant-based movement will become mainstream and arrive in the middle of our society soon. I hope that each day more people will come to realize that a whole food, plant-based diet is a gift for humans, animals and the whole world. It helps us to age healthier, drastically reduces the skyrocketing health care costs, sustains our basis of existence and prevents animal cruelty. 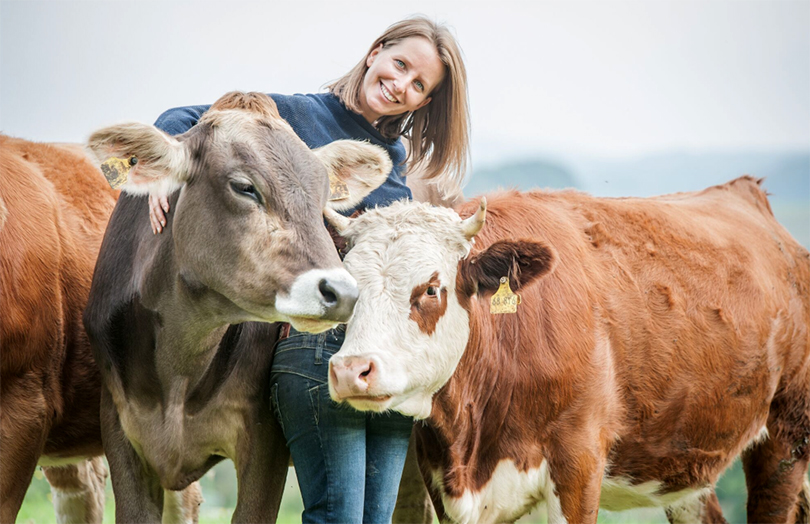 What is the main message you would like the world to hear?

My message to the world: The greatest danger to us and our future is indifference. It is up to us as a consumer to use our power consciously for our health, our environment and the animals – using our fork and knife.

If you could have one hope for both the agriculture and pharmaceutical industry what would it be?

The agricultural industry dominates and controls what is sprayed and grown in the fields, the protocols of farms and the farmers and ultimately, the food in supermarkets. The pharmaceutical industry is primarily focused on medicines for treating symptoms rather than curing the root cause of the sickness and disease, thereby triggering innumerable health side effects. We need a turnaround in both areas. The agricultural and pharmaceutical industry needs to change their strategy to a health-focused system that contributes to the health of all people, animals and the environment. I hope that the plant-based movement will help foster an agricultural and a pharmaceutical industry that will protect our livelihoods, conserve biodiversity, preserve our health and eliminate animal cruelty.

H.O.P.E. stands for Healing Of Planet Earth. More information about Nina Messinger and her award-winning, plant-based documentary can be found on www.hope-theproject.com

Watch the film for free: