Topics » Disease » Is it Time to Quit the “War on Cancer”? 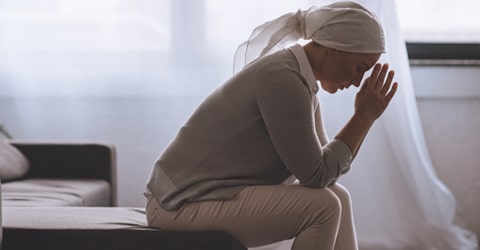 The National Cancer Act of 1971,[1] signed by President Nixon on December 23 of that year, is generally recognized as the beginning of the “war on cancer.” It amended the Public Health Service Act of 1944 and mandated many significant changes to the way the US dealt with cancer. Among other things, it:

To summarize the goals of the legislation in its own language: “the purpose of this Act is to enlarge the authorities of the National Cancer Institute and the National Institutes of Health in order to advance the national effort against cancer” (emphasis added).

While others[2] have located the so-called war’s roots earlier—focusing especially on the work of “socialite and publicist” Mary Lasker and the previous decade’s lobbying and funding work of her Citizens’ Committee for the Conquest of Cancer—there is no disputing that the 1971 legislation was supposed to mark a momentous shift in public perception and professional approaches to cancer research. And though “[Nixon] did not use the phrase [war on cancer]… that day — perhaps because he had already declared a ‘war on narcotics’ only six months earlier… he did express the hope that the Act would be seen by history as ‘the most significant action taken during [his] Administration.’”

Compared to Other Wars

To Nixon’s point, victory in the war on cancer certainly would have made the legislation’s adoption seem like one of the most significant actions of his administration. For cancer had, by that time, become the nation’s second leading cause of death.[1] To put the potential victory into perspective, Nixon compared cancer mortality to American deaths during World War II.[2] Whereas cancer killed around 330,000 Americans in 1970 alone,[3] 291,557 Americans were killed in combat throughout the entirety of WWII.[4] Including non-combat, war-time loss of life (caused by accidents, disease, suicide, and murder), WWII produced a death toll equivalent to less than 15 months of cancer deaths at the 1970 rate, and even the most deadly war in American history—the Civil War—killed far fewer people than cancer in the years 1970 and 1971:[5] 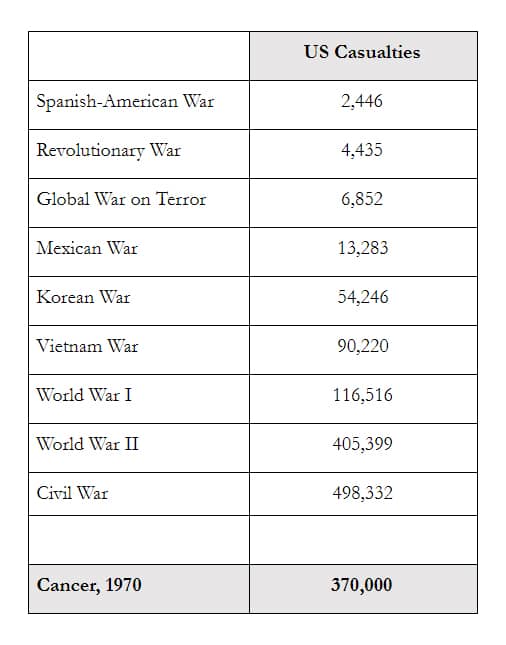 In short, if we accept Nixon’s preferred metaphor and its attendant vocabulary, then we would have to describe cancer in the years preceding the National Cancer Act of 1971 as the single most devastating, hostile adversary ever seen on any battlefield in recorded American history.

In light of that, the goals of the legislation seem very important and valiant. And it is from those goals and from that premise that cancer research, funding, and treatment has proceeded for the past half century. As described by one journalist in 2009,[6] Nixon sought to find a cure by 1976, and after that, “the date for a cure… kept being put off.” As of the time of that article’s publication, NCI had spent more than $100 billion and expanded its army of employees beyond 4,000.

So—Are We Winning the War?

The answer is perhaps more complex and nuanced than many would like to admit, and there is no clear consensus. Bold, contradicting claims are not hard to find. According to one, the war “has had a profound impact and succeeded in fulfilling its mandate;”[7] according to another, “we obviously haven’t won the war.”[8] Champions of the war point out that critics often fail to specify their criteria for judging success; meanwhile, many of the common critiques are difficult to answer for.

Eight years ago, in Switzerland at the World Oncology Forum, the question was posed to:

a gathering of thought-leaders… [and] the conclusion was, in general, no. Despite the introduction of hundreds of new anticancer drugs, including advanced therapies (so-called magic bullets) aimed at particular weapons in the enemy’s armamentarium, the consensus was that, for most forms of cancer, enduring disease-free responses are rare, and cures even rarer.[9]

But even that does not tell the whole story. The extent to which researchers believe the war has failed depends on what they consider the war’s most important goals. Likewise, although some researchers are hopeful on account of battles won—understanding of the disease’s specific mechanisms has improved; funding has grown tremendously since 1971; and according to some, “refined and potentially more-effective tactical strategies are being developed and tested”[9]—these victories do not necessarily indicate that the war has been won.

Many cancer “treatments” offer only small and short-term effects. They remain incredibly expensive. The disease remains difficult to study, and remains the second leading cause of death in this country.

With Every Victory, Another Battle

As with many complex problems, even celebrated advances are accompanied by new, unexpected challenges. Advances in “targeted therapy,” for instance—that is, “drugs or other substances [used] to precisely identify and attack certain types of cancer cells”[10] and “target genomically defined vulnerabilities in human tumors”[11]—are lauded for potentially improving the precision and effectiveness of cancer treatment, but produce a number of new challenges. Short of a cure, these are exactly the types of advances that researchers and the public would have hoped for 50 years ago. And yet, “the relatively rapid acquisition of resistance to such treatments… is observed in virtually all cases… and remains a substantial challenge to the clinical management of advanced cancers.”[11] Indeed, there is not a single cancer therapy that is not limited by the development of drug resistance, meaning that for many cancer researchers, the next step is to determine new strategies for predicting “eventual clinical drug resistance… and identifying novel resistance mechanisms.”[12]

Perhaps researchers will improve in their ability to predict drug resistance, and future treatment protocols will yield better results, but in the meanwhile, the domino effect described above goes to show that even the most celebrated advances in the war on cancer have not been without challenges of their own. It’s no wonder that some[9] are dissatisfied with the outdated metaphor, and argue for something new: “a military battlespace” approach that focuses far more attention on highly detailed “information about the enemy’s characteristics and armamentarium.” Like the vast majority of treatments in the disease response system, this one places technology front and center, “to attack cancer with our increasingly powerful drugs and other weapons, with the use of increasingly advanced therapeutically strategies.”

In other words—the war on cancer may not be the raging success we hoped for, but now is not the time to abandon our battle stations. Rather, it’s time to upgrade the metaphor, and our weaponry.

In addition to challenges outlined in the article cited above, there are other justifications for ditching the outdated metaphor. Some have warned of parallels between the “medical-industrial complex” and the self-fulfilling “military-industrial complex,” and warned of the lack of prevention that occurs when so much money is being pumped into (and squeezed out of) the search for new weapons and “the distorted priorities of ‘war.’”[2] Others are concerned of the implications of labeling patients as fighters, given that “most patients with advanced disease end that journey with loss of life” and no amount of fighting will change that fact. [13] “It is concluded that public policies to avoid the ‘war on’ notion are required,”[14] but where does that leave us?

Perhaps we have arrived at a time to finally quit the metaphor, but where does that leave its goals of nearly five decades? Where does it leave the challenges and goals outlined in the National Cancer Act of 1971?[1] That:

Which of these challenges and goals have we moved beyond in the year 2020? Clearly, sadly, we have not “conquered” this disease yet. How far do we still have to go? In the following article, we’ll look more closely at the central question—are we winning the war on cancer?—and interpret trends in incidence, mortality, and survivorship data.

This article is part of a new series on The Future of Nutrition: An Insider’s Look at the Science, Why We Keep Getting It Wrong, and How to Start Getting It Right by T. Colin Campbell, PhD, (with Nelson Disla) to be released December 2020. We will preview selected topics and themes central to the book, as well as taking a deeper dive into subjects that did not make it into the book.

Too Many Cancer Promises & Too Much Professional...

The Link Between Nutrition and Cancer Is Not New, Just...