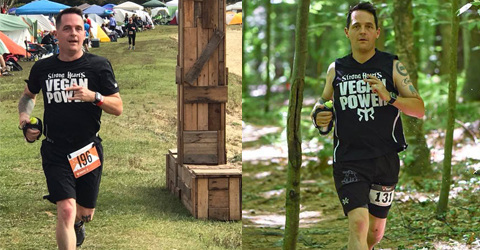 This Plant-Based Ultra Race Runner is Striving For Healthy Change

Vegan? That was the last designation I ever thought I would use for myself. I mean, how the heck could I?

My former self was an aggregation of beer drinking guy, pack a day smoking dude, and tattooed heavy metal band singing badass! Plant eater? Yeah right! I mean those people were just hippies that ate grass right? Plus, vegans were those crazy people always protesting with signs and screaming at people; who the heck wants to become part of that?

Rewind to 6-7 years ago when I finally got around to seeing a doctor. I was getting close to 40 and it was time to check-in even though I felt as healthy as ever. I had insurance so why not use it? After giving blood the week before, I saw the doctor and was told I had the cholesterol of a man larger than myself and older. I couldn’t believe it. The immediate thought was to put me on some pill and see what happened from there. Maybe we could get this under control and I wouldn’t be at risk for a heart attack before 50!

I had other ideas though.

I never was much of a pill guy. There had to be a way to do this without becoming part of the pharma machine. I started doing some research; reading this article and watching that documentary. Like so many others I was blown away by Forks Over Knives. I followed that up with Vegucated, Food Inc and many more. The truth started becoming more and more obvious, I could fix my cholesterol issues if I cut out meat. Sounded simple enough.

So I did that and started running and exercising too. It just felt like the obvious thing to do, right? The next year my numbers didn’t really seem to change much. I was getting healthier and could run a Spartan Race with no issues, but my cholesterol was still high and I was at risk. So I cut out dairy. I also had to find a new doctor as mine was retiring. I wanted to make sure I found the right one though and they had to fit in with this new lifestyle I was obsessed with.

Enter Dr. Kumara Sidhartha. After another year, and dropping the dairy, I went to see him for my first physical. Let’s compare what he saw compared to my last test results.

Were those numbers perfect? No but the real question is, were they better?! Heck yes they were. This lit a fire in me like nothing else. I started feeling better and better. My recovery time from over-exerting myself with exercise and endurance events was getting smaller and smaller. I could push myself more and more; which I did.

In 2015 I competed in the Winter Death Race in Pittsfield, VT. I made it to the 20 hour mark and took the DNF (did not finish), but it still felt like I accomplished something. Those 20 hours were grueling and my body had enough abuse. I made peace with my decision and was okay with it. I had spent all that time doing remedial tasks all the while dealing with temperatures below -20° F.

Yes, you read that right!

That same year, at the end of the summer, I finished my first ultra-marathon. It took me a lot longer than I hoped but I finished and checked that off the bucket list. It was a rigorous race, but where I failed I learned what not to do.

I want to prove that plants can power anyone, at any age, to accomplish things they never thought they could.

Eating plants and plant-based foods sets me up for success everyday. Whether it’s running a 5k, 10k or a Ragnar Relay with the Strong Hearts Vegan Power team the fact of the matter is, I would never have been able to do it living the life I used to live.

I’m currently training for my next 50k in June, the Vegan Power Ultra and have set a goal to run from one end of Cape Cod to the other. That is roughly 62 miles and will be my first 100k distance. Why? To say I did because I can! Also because I turn 45 this year so I want to prove that plants can power anyone, at any age, to accomplish things they never thought they could.

I’m far from Scott Jurek or Catra Corbett. I’m not winning races anytime soon. I’m just an average guy with a job I enjoy, a family I adore and an obsession eating plants, fighting for animals and running some trails while I’m at it.

I am vegan yet I’m not infallible. Striving for change is all we can do, perfection will come. I have work to do and I eat junk from time to time, but staying away from animal based products as a whole has benefited me physically and mentally. My cholesterol has dropped a bit more and I still struggle getting it where I want, but I’ve done so with food and not pharmaceuticals.

I may be 44 but I’m just finding out that age doesn’t matter when you treat your body well. My best years are ahead of me and I’m not looking back!

Image credit: Ben Kimball photographed the image of Nate running in the woods.