Topics » Nutrition Science » How Fake Food Flavorings are Literally Killing Us: Excerpt from The Dorito Effect 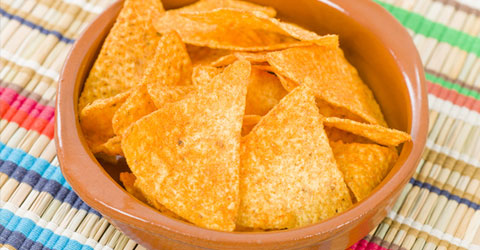 How Fake Food Flavorings are Literally Killing Us: Excerpt from The Dorito Effect

Excerpt from the “The Dorito Effect” & Q&A with author Mark Schatzker republished with permission.

Our superbly sensitive noses are fooled regularly and often, to great and profitable effect. The most illustrative example of nose fooling comes from a product whose very purpose is to encourage repeat and escalating dosage: tobacco. Cigarettes are flavored just the way Doritos, potato chips, soft drinks, salad dressings, chicken nuggets, and supermarket cheesecake are flavored. Men and women with advanced degrees purchase flavorings in bulk from flavor companies and put them in cigarettes. It is lucrative employment. A recent job posting by Philip Morris International states, “The successful candidate will play an integral role in the creation and development of cigarette flavor systems” and this person’s responsibilities will include “ensuring cigarette flavors and/or flavor application systems are transferable from the laboratory to the flavor production facility and the cigarette production facilities.” A flavorist’s artistry is assessed by a “trained smoking panel.”

These chemicals have lurked in mainstream cigarettes for decades. In recent years, however, tobacco flavorings have had a sort of coming- out party. Smokes now come in nonsubtle, exciting flavors like French grape, chocolate mint, and cherry. And just like young pigs love Sucram*, young humans love flavored tobacco. They love it so much that the federal government banned flavored cigarettes in 2009 and now high school smokers have moved to where the flavor is: flavored little cigars, a product that in 1972 the industry recognized “can be consumed in volume because the taste and aroma is acceptable to the young smoker.”

It is classic bait and switch. Cigarette smoke comes cloaked in flavors that seem familiar, wholesome, and natural, and then quietly slips in a dose of something with a powerful post-ingestive feedback: nicotine. Food is following the identical model. And we keep getting better at it. The process of identifying flavor mixtures in nature and then cranking them out in factories used to take months, even years—in the case of vanilla, a century. Now we can do it in a matter of weeks, if not days. Flavor companies dispatch teams to rain forests and citrus groves to hunt down eye-popping new flavors, and the chemicals are brought back to headquarters for analysis and reproduction. In 2012, the world’s largest flavor company, Givaudan, sent an expedition to Mexico that led to the creation of “authentic mango flavours.” Givaudan has even developed a Virtual Aroma Synthesizer, a trumpet-shaped device that mixes flavors in real time until the optimal version of “cherry” or “strawberry” is achieved. It is used with “children panels”—flavor focus groups of kids—who engineer a perfect cherry with a few clicks of a mouse. As a Givaudan executive put it to me, “We get a very good idea what children consider the best cherry.”

* Sucram is a patented combination of high intensity sweeteners with taste enhancers and potentiators, all combined into micro-sized particles.

Q&A with the author Mark Schatzker

In The Dorito Effect, you say that the obesity epidemic is, in fact, a flavor problem. Can you explain that?
For the past half century or so, the nutritional debate has been about nutrients. Fat was public enemy number one for many years. More recently, we’ve aimed our guns at carbs, and now sugar. However, we almost never pause to consider the role that flavor plays in our eating. When you stop to think about it, this is very strange. We all approach meals with the expectation of pleasure. We want food to be as delicious as possible. And yet, when it comes to nutrition, we completely block this out. We speak as though we are robots or who go out to the supermarket and buy “protein” and “monounsaturated fat.”

Why do you think flavor is so important?
It’s how we’re wired. If you think of the human genome as an instruction manual, the biggest chapter is on your flavor system — the sensory apparatus that is the human nose and mouth. From an evolutionary point of view, flavor must be playing an extremely important role. Otherwise, why would it be hogging all that DNA?

So what is it doing there?
The flavor system is there as a means of acquiring important nutrients. There is a body of literature on this in animal science and behavioural ecology that is just fascinating. If you make a sheep deficient in an essential nutrient, for example, it will begin to crave the flavors that will bring it this nutrient. Animals have an amazing ability to meet their nutritional needs. And when you think about it, it must be so. Sheep, like humans, require energy, essential amino acids, vitamins and minerals. They have to acquire these nutrients, furthermore, from a complex and diverse substance — food. How does an animal make its way through the world and get the nutrients required to survive? The answer is flavor.

Is there evidence that humans do this, too?
With humans, the science becomes more challenging because we can’t make a bunch of human research subjects deficient in an essential nutrient and then see what kinds of foods they start craving. That said, there is compelling evidence we are no different than sheep when it comes to the connection between flavor and nutrients. For example, when British sailors were suffering from scurvy, they craved fresh fruits and vegetables, even though they had no idea it was an absence of fruit and vegetables that was causing their malaise. When they would make landfall, they would set out and forage for things like moss and wild turnips, and they wrote about how wonderful they tasted. More recently, there was a paper published in the journal Science, that found that the flavor compounds that make tomatoes delicious are all synthesized from the nutrients — like carotenoids, omega-3s and essential amino acids — that make tomatoes so healthy. You might say that the flavor of a delicious tomato is a chemical sign tell your body “this is nutritious!”

How has the flavor of food changed in the last half century?
Very simply, the whole foods we should be eating — tomatoes, strawberries, carrots — have been getting blander and blander. Anyone who’s ever grown heirloom fruit and vegetables knows what I’m talking about. Thanks to high yield agriculture and a market that values low prices above everything else, we have literally bred the flavor out of food. At the same time, flavor companies have identified the flavor compounds in foods that make them delicious and now we manufacture them in factories. These synthetic flavorings, which appear on ingredient labels as “artificial flavors” or “natural flavors” — aren’t just added to soft drinks and potato chips. They’re added to raw chicken, yogurt, frozen pizza, fast food — you name it. Americans collectively consume about 600 million pounds of fake flavorings every year. Simply put, we have made whole foods bland and processed junk food even more delicious. We have turned one of our most ancient and important bodily systems against ourselves. And it’s literally killing us.