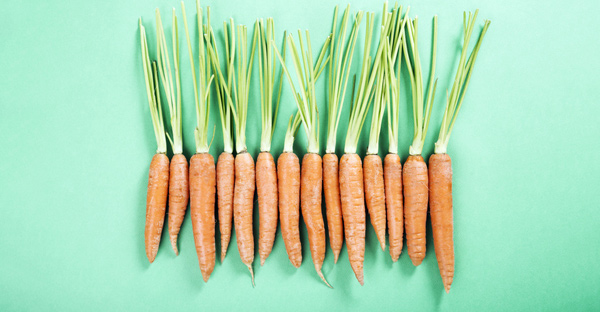 The famed animator Chuck Jones had no intention of changing America’s food habits when, half a century ago, he stuck a carrot in Bugs Bunny’s hand as talisman, protector, and object of desire. Rabbits, Jones figured, like carrots. After all, didn’t Peter Cottontail always head first for Farmer Brown’s carrot patch when out raiding for food?

Now, insofar as rabbit culinary preferences go, any old weed would have done nicely for Bugs. Put a carrot in a pile of assorted vegetables and greens and set it before a hungry bunny, and the creature will show no special preference for Daucus carota sativa. But Bugs Bunny is a more influential rabbit than most. Call it the purest of coincidences, but Bugs’s lifespan has coincided very nicely with a marked upsurge in the last few decades of carrot consumption in this country.

That it took a cartoon to make the carrot popular is a strange matter. Although it was one of the first food plants brought from England to North America by the colonists, the carrot remained almost an afterthought for centuries, something to add to stews and casseroles – but more often to animal fodder. Indeed, during those formative years in America the carrot’s closest relatives enjoyed wider use than the carrot itself – they being plants used almost exclusively as spices: anise, cumin, caraway, dill, chervil, parsley, coriander, and fennel.

Even with the influence of Bugs, American consumption of carrots falls far short of that in Europe, where purple, white, and red varieties are sold alongside the carrot we know. That bright-orange vegetable is a hybrid cultivated in Holland in the 17th century from varieties common in Europe since ancient times, brought there from the carrot’s original home of Afghanistan. Grown in startling abundance throughout Europe, and especially the British Isles, the carrot has long been a staple there, often associated with the diet of poverty. As the actress Joyce Green recalls in her 1947 memoir Salmagundi, her well-to-do mother was horror-struck at the thought of having to endure a nightly meal of cooked carrots with a little boiled cabbage during World War II, although such a diet kept millions of Britons from starving.

"Carrots are Good for You"

In any event – carrots are good for you. Carrots are rich in potassium, a mineral in which too many Americans are deficient. They are low in calories (about 50 to a cup of raw carrots, and 70 to a cup of cooked carrots), fat free, and high in fiber. Also, they make for a nutritional and filling side dish or snack; if you eat only a couple a day, you’ll do much to reduce your blood cholesterol.

Carrots abound in natural sugars; of vegetables, only beets contain more. Their healthful sweetness makes carrots a recommended substitute for sugar in cakes, dressings, and puddings. Shredded carrots atop breakfast cereal have yet to catch on, but adding some to fresh or canned tomatoes in sauces helps cut acidity and reduces the risk of heartburn.

Carrots are shot through with beta carotene, the chemical precursor to vitamin A. The heightened carotene content of our supermarket variety is what makes the carrot orange to begin with. Carotene also gives color to mangoes, sweet potatoes, apricots, and grapefruit. Eat a few dozen a day and you run the risk of changing your skin to a peculiar, yet harmless shade of yellow. Carotene is released with cooking, and a single cup of cooked carrots contains more than four times the federally recommended daily allowance.

Although scientists have yet to agree conclusively on the matter, carotenes are thought to inhibit – and perhaps even prevent – the growth of many kinds of cancers, especially those of the lungs, pancreas, and spleen. For that reason, many doctors suggest that smokers especially add carrots to their diets.

Scientists, too, have yet to figure out why carrots and apples cannot coexist side by side in the refrigerator. Yet there the mystery remains: put a carrot next to an apple, and both will turn bitter overnight. Not even the mighty Chuck Jones knows why.