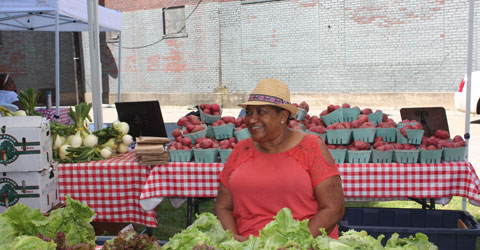 Deeply Rooted Belief in Healthy Food For All

The following is an article from a Community Grant recipient.

I was a precocious kid. At 12, I announced to my mother and brother that I was, from that point on, a vegetarian. I had decided, thanks to the influence of my older, quite hip cousin, that I just couldn’t eat animals anymore. My mother was not happy. After all, I was rejecting her Ashkenazi Jewish cooking—served with a side of 1970s packaged and canned wonders—that she’d always dished up with love, intention, and history. As a single mom with a demanding career, she didn’t have time to make both me and my meat-loving older brother happy.

After too many evenings of watching me cry when she put any meat under the broiler, she understood that I wasn’t going to budge, and she said something that has had a profound impact on my life ever since: she said that if I was going to give up meat, I would have to learn to cook for myself. Off we went to the Matawan, New Jersey Public Library to find vegetarian cookbooks. There was one. Written by a group of California-based Hare Krishnas, it featured such wonders as lentil burgers, yogurt pie, and spinach sandwiches. I went to work, scouring local farm stands with my mom (an original local foodie) and feeding the creations to my friends and family. 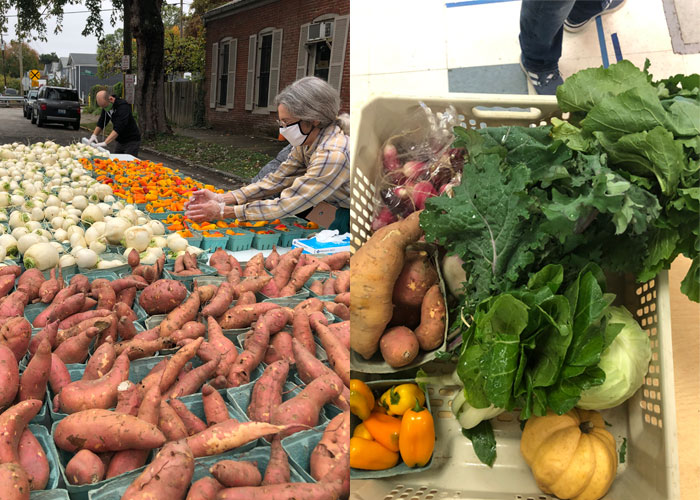 This early awakening started me on the path towards becoming not only a very passionate (and good) home cook, but also a dedicated social justice activist and organizer. But it wasn’t until I moved to a rural area in southern Indiana that I really woke up to food injustices in our country.

Orange County, Indiana is a beautiful rural area with rolling hills, a national forest, and abundant farmland. I was excited when spring came to our valley. I thought local produce would be abundant. It wasn’t. And that was my first introduction to Big Ag, the role of corn and soybeans in our industrial food system (it was meant for the animals!), and the fact that even during local growing seasons, one had to head to Walmart to buy imported produce. None of it made sense, and I wanted to do something about it. So, with my neighbors, I began to organize to make local produce a bigger possibility, including through the Orange County HomeGrown Farmers Market.

Since then, I’ve gone on to found several nonprofits. Today I am a co-founder and executive director of the Louisville, Kentucky-based nonprofit food justice organization New Roots, and our beloved Fresh Stop Markets. 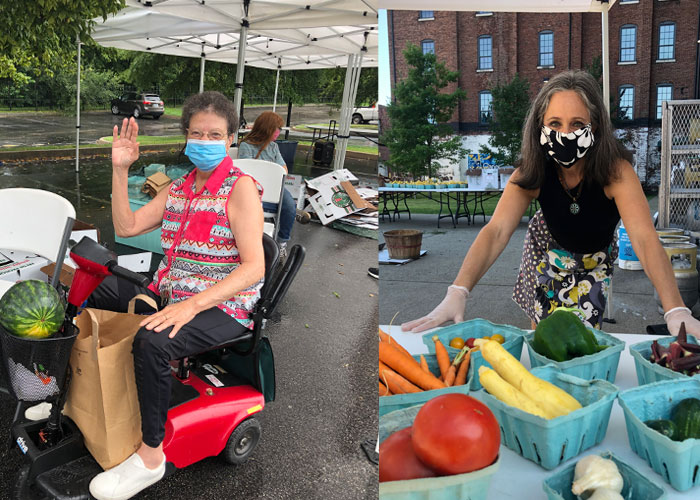 It would be widely condemned and considered inhumane to expect anyone to survive on far less than the recommended amount of water. Why should food be different?

New Roots is the result of the profound shock I felt when I moved to Louisville in 2009. In neighborhood after neighborhood, I saw unequal access to food, often along blatant lines of race or class, either 1) in the total lack of grocery stores or 2) in the degree to which fresh food was subpar, limited, or prohibitively expensive. This lack was combined with an abundance of cheap, heavily-processed fast food.

It was and remains unjustifiable. If at least half of our plate should be made up of fresh produce (as nutrition science tells us), then anything less is a violation of a basic human right. It would be widely condemned and considered inhumane to expect anyone to survive on far less than the recommended amount of water. Why should food be different? Like water and air, we need fresh food to be happy and healthy. It should not be a privilege, but a right, and New Roots is led by people who believe it deep in our hearts.

Our Fresh Stop Markets are biweekly pop-up markets that appear during the six-month growing season in eight different neighborhoods. These neighborhoods are chosen based on fresh food insecurity. For their residents, fresh food is either not within physical or financial reach. Each shareholder (customer) family contributes what they can toward the cost of paying our farmers a fair price for their produce; 77% of them identify as living at or below 185% percent of the poverty threshold. By allowing shareholders to pay what they can, we ensure that everyone is able to participate. Moreover, everyone gets the same delicious bag of nine varieties of fresh seasonal (mostly organic!) produce. The markets are all volunteer driven by our shareholders and our small staff, which means that every shareholder also has the opportunity to directly contribute toward the goal of fresh food for all. I draw a lot of spiritual strength from the fact that everyone involved across our city is pooling their time and money to help each other eat healthily. 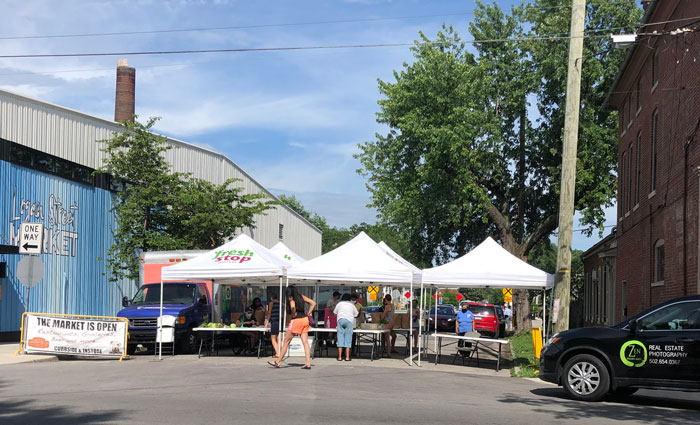 This CNS grant will help New Roots turn our “Super” shareholders into coaches for other shareholders who are struggling to get through the vegetables between pickups. This will help encourage lasting change in our shareholders. I saw this potential when one of our shareholders walked into our office after a three-month absence. He had spent the growing season eating up all the produce and becoming 100% whole food, plant-based (WFPB). He was a new person. It wasn’t just the weight that he had lost—there was an inner glow emanating from him and he was off of his medications and back to working his full-time job. It was as if the plants had given him a brand-new life. 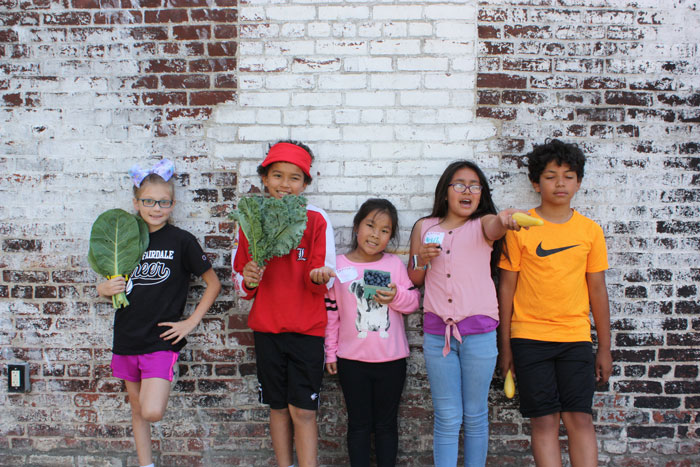 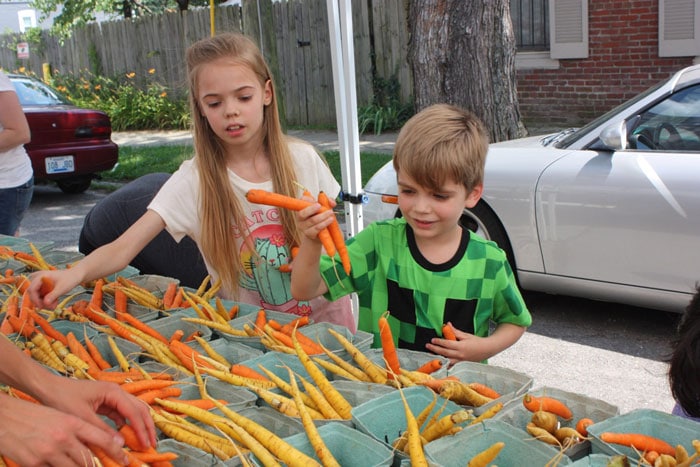 I’m excited about the future of New Roots. My hope is that we can one day partner with a health care provider who understands and supports a WFPB lifestyle to increase our positive impact on our shareholders’ lives. We also hope to replicate the Fresh Stop Market model in other communities across the nation.

The T. Colin Campbell Center for Nutrition Studies (CNS) is committed to increasing awareness of the extraordinary impact that food has on the health of our bodies, our communities, and our planet. In support of this commitment, CNS has created a Community Grant initiative to empower sustainable food-based initiatives around the world by providing grants to enable innovative start-ups and to propel the growth of existing initiatives. Please consider making a donation to this great cause. 100% of your donation will go to support initiatives like the one you just read about in this article.

What is Food Sovereignty? 3 Steps for Taking Back...