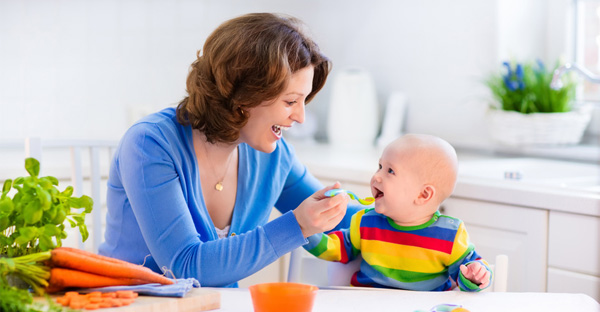 Eat Your Vegetables! Getting Young Children to Eat Healthy

You can compare a child’s body to a building under construction. A lot of different materials are needed to build it and to keep it in good repair. But a human being is also a kind of machine that’s running. It requires fuel for energy, and other substances to make it work properly, just as an automobile needs gasoline, oil, grease and water.

To do this, keep a balanced attitude. You don’t judge foods on calories alone, or on vitamins alone, or on minerals alone. Everybody in the long run needs a balance of low and high-calorie foods as well as a balance in other respects in the diet. Fortunately, there are a number of good books available and many of which include a variety of recipes. As important as consulting a book, however, is encouraging your child to eat a variety of vegetables at an early age.

During your baby’s first year, you will want to provide him or her with most of the following cooked vegetables: spinach, peas, onions, carrots, asparagus, chard, squash, tomatoes, beets, celery and potatoes. Before a year, the change should be made gradually from pureed to a coarser, lumpy consistency. (Naturally, some pureed and finely mashed vegetables can still be served.) Peas should be mashed slightly to avoid their being swallowed whole. Steamed vegetables, such as carrots, potatoes, and green beans, cut into pieces make good first finger foods.

Sweet potatoes or yams can be used at times instead of white potatoes. If you have been sticking to the easily digested vegetables up to the ages of a year, you can try gradually the less popular and sometimes less digestible ones, such as lima beans (mashed), broccoli, cabbage, cauliflower, turnips and parsnips. Much of their strong taste can be removed by changing the cooking water twice, though the problem with this is that it also destroys some of the vitamins. Some children like them and digest them well, but many won’t touch them. Have patience and don’t worry. Wait until two years to serve kernels of corn. Young children don’t chew it so it comes through unchanged. Use only tender corn. And when cutting it off the cob, don’t cut too close. That way each kernel will be cut open. At age three or four, when you start corn on the cob, slice down the center of each row of kernels, so that they are all open.

The more easily digested raw vegetables are usually started between one and two years for the child with a good digestion. The best are peeled tomatoes, lettuce, sliced string beans, shredded carrots, and scraped chopped celery. Even if they say “organic,” they should be well washed. Go slowly at first and see how they are digested. Orange juice or sweetened lemon juice can be used for dressing.

If you use commercially prepared vegetable soups, you will need to read the label carefully. Some are very high in sodium.

Sometimes a child may refuse vegetables in any form for weeks. What will you do? Will their nutrition suffer? Vegetables are particularly valuable for various minerals and vitamins, and also for roughage. But in a pinch, a variety of fruits will supply many of the minerals and vitamins, and the same amount of fiber. In other words, if your child dislikes all vegetables but likes fruits, don’t fuss. Serve fruit two or three times a day and forget about vegetables for a few weeks or even months.* If you don’t make an issue of them, chances are very good that your child’s appetite will swing around to them again in time.

Even if a child is not eating their vegetables, it is a good idea to keep having the child taste them. There are so many varieties of vegetables in terms of tastes and consistencies that if a child stops taking one then there are always others to try.
– Dr. Thomas Campbell