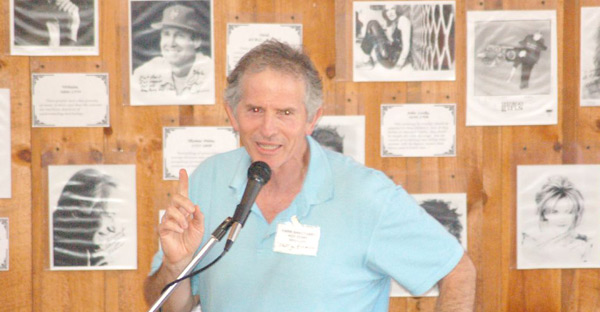 Many in the vegan/vegetarian/plant-based community will have known our good friend, George Eisman of Watkins Glen, NY, not far from CNS’s hometown of Ithaca, NY, who passed our way on his way to everlasting peace.

Were it not for George, my friend and colleague, coming into my life, as I am confident that he did for many others, I may never have had the pleasure of writing these words on this website. It was in the early 1990s, when George came to the Cornell campus to ask whether I might be interested in organizing a course in ‘vegetarian nutrition’ to teach on campus. He had a recent opportunity to teach his own course in a small community college and wanted it to continue in a major university. We both had the impression that such a course had not existed elsewhere in the U.S. As well, we were aware that it was needed because, in part, the concept had long been anathema in traditional nutrition science and medical circles.

I was not of the opinion that it would necessarily attract students from outside the ‘V’ (vegetarian/vegan) community and I was not especially interested in labeling the course ‘vegetarian nutrition.’ But I was impressed with George’s sincerity in this topic and his warm personality as a fellow human—he was convincing. Like George, I also was quite aware of the very limited respect that this version of diet and health was getting within the professional nutritional science community. Our versions of nutrition were converging and it was time to test the waters.

George also told me that he might be able to interest a private foundation of his acquaintance to provide funding to help get the course started. It was not that we needed funding to do the course. But George’s idea of funding was attractive because I thought it could be an opportunity to invite to campus some outside speakers who would have had a perspective not generally appreciated by traditional nutrition science communities—some might call them ‘the establishment’! I also wanted to hear more from these folks who likely had not had an opportunity to tell their experiences in such a forum. I welcomed their participation both for my education as well as for the education of the students.

My own experiences in research were very much leaning in George’s direction, thus giving me the opportunity to explore more deeply the scientific basis for this point of view. Thanks to the NALITH Foundation and Michael Tucker who was its principal spokesman, we received sufficient funding for me to invite a total of 32 mostly off-campus speakers to speak to my class over the next 6 years (about 5-6 lecturers of the total 35-36 lectures each year). It was a very rewarding experience both for me and for the students.

This 3-credit course was an elective (i.e, not a requirement) but, even so, a total of about 420 students enrolled in the course for credit during that time and they represented a variety of undergraduate fields of study, pre-med, pre-law, biology, nutrition, biochemistry, and few liberal arts and agriculture sciences students.

It was that course, with further revision, that eventually evolved into CNS’s present Plant-Based Nutrition Certificate powered by eCornell. I should mention that there have been many talented, dedicated people who have made our course what it has become and who richly deserve credit, especially Sylvester Johnson (PhD, Cornell, physics) who provided the initial funding and, as successive executive directors, the late Megan Murphy (one of the students in the Cornell class who co-founded the program we now have), Micaela Cook Karlsen (MSPH), Tom Campbell (MD, executive director, now medical director) and Jenny Miller (current executive director), and their respective staffs and excellent instructors for the course.

I mention these individuals both to credit them for their work but, especially, to say that our CNS family and the many students we have had, owe George Eisman, who many never had the pleasure to meet, our heartfelt gratitude and to his family, we extend our heartfelt sympathy. George, you made this possible.