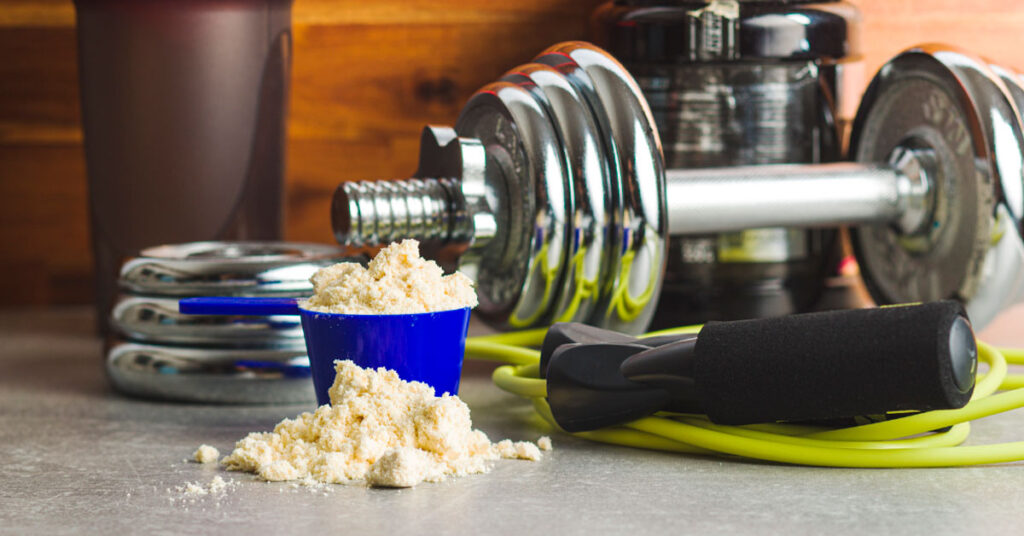 No Whey, Man. I’ll Pass on the Protein Powder

For the past fifteen years, I have been closely involved with the bodybuilding industry. I have an intimate understanding of how the industry operates. In a nutshell, it is sustained by the supplement companies that sponsor the athletes who represent them. This in turn inspires fans who admire the athletes to purchase the products they represent, thus creating a cycle that drives record sales and profits, all the while potentially harming the health of many involved in the industry later on down the line.

Two of my favorite professional bodybuilders, Nasser El Sonbaty and Mike Matarazzo, recently died in their forties, likely from diet-related health issues. In all probability, their deaths were a result of too much protein consumption, coupled with the use of performance enhancing substances day after day until their organs failed. Now they’re gone. This is not a rare occurrence in bodybuilding. Though bodybuilders exercise more than the average person, the rate of bodybuilders suffering from diet-related health problems is often more common than the general American public falling ill to diet-related diseases. Clearly, there is a problem that needs to be addressed.

If there is one thing in the sport of bodybuilding that is as common as weight training, it is the use of supplements. No supplement is more widely consumed than protein powder. The powders of choice among mainstream bodybuilders are whey and casein, which are proteins derived from cow’s milk. In fact, these are the substances of choice for most protein powder consumers worldwide.
Athletes from all walks of life embrace the consumption of excess protein under the assumption that more is better. Many companies (and entire industries) have gone to great lengths to convince the public that they need to seek out high protein foods and consume as much protein as possible, without any consideration of the health consequences that accompany excess consumption. The focus on consuming large amounts of protein is so engrained in our culture, there are often warnings given out by friends and relatives of those following a plant-based diet that protein will be hard to come by without consuming animal products. That is another way protein supplements squeeze their way into the diets of citizens everywhere, through the unwarranted fear that we won’t get enough of this specific nutrient, suggesting whey and casein as plausible aids in this quest.

Years ago, I learned from Dr. T. Colin Campbell’s book, written with his son, Dr. Thomas Campbell, The China Study, that casein has the ability to turn on and turn off cancer growth simply by adjusting the level of intake of that protein. This was determined through years of clinical trials, experiments, and tests, which yielded these results, and are outlined in detail in Dr. Campbell’s research. His findings show that when casein is consumed in large quantities, cancer cells increase in size, and when there is a cessation in consumption of casein, cancer tumor cells recede.[1] I later learned that elevated levels of protein can also cause kidney damage, liver problems, kidney stones, excess fat gain, contribute to the damaging of the lining of artery walls, lead to plaque build up in arteries, result in lethargy, diminish bone density, and cause a host of other health problems. If this is truly the case, as it has been revealed by Dr. Campbell and numerous other world renowned experts who came to the same conclusions through experimentation, observation, and scientific research, why are these products consumed at such high levels? With their direct correlations to increased risk of disease, why is casein, which has been linked to illnesses such as prostate cancer, more than any other protein, allowed to be sold in stores? Why are these products even produced? After all, who needs them, besides calves?

If we have special protein powders created from cow’s milk for human consumption, it would only make sense that it must be because our society sees a very high rate of protein deficiency. But, that isn’t the case at all. In fact, a protein deficiency is almost unheard of in America and only exists in someone who does not consume adequate calories. The reason this is so, is because of the macronutrient make-up of food. Food is only made up of proteins, fats, carbohydrates, and water (and sometimes alcohol). Some level of protein is present in all foods, and in significant quantities in specific types of foods such as beans and other legumes, nuts, seeds, leafy green vegetables, other vegetables and grains. The amount of protein required by the human body (5-10% of total calories per day) is relatively low in comparison to the other macronutrients. It is therefore impossible to be protein deficient when sufficient calories are consumed. This is how nature works. In reality, most people in developed countries, including those following a plant-based diet, eat too much protein, not the other way around.[2] We clearly don’t have a health or nutritional need for whey or casein protein powders, so why are they here, why are they so popular, so common, and why is their use so infrequently questioned?

Part of the answer lies in the world of bodybuilding and the magazines, books, websites, athletes, and other individuals that feed the industry. The community that I have been part of for so long is a key factor in keeping these antiquated ideas about protein alive. It is therefore my (and others’) mission to effectively dispel these myths by showing a healthier way to support fitness goals without the use of any substances that came from a cow’s udder. As a semi-retired bodybuilder and current health and wellness advocate and multi-sport athlete, I endorse a whole-food, plant-based diet for optimal results, even when bodybuilding. I aim to put the desire for elevated levels of protein to rest by showing how a relatively low protein, whole-food, plant-based diet can support all athletic endeavors effectively and efficiently. I have achieved great results as a plant-based athlete for the past two decades, and have sought to lead by example.

If health is your goal, clearly, your answer to cow-based protein powders should be, “No whey, man.” Let’s put this into perspective. If you had to buy a clearly labeled animal-derived fat powder and carbohydrate powder at the same time of purchase as a whey or casein protein powder, would you proceed with the purchase? Or would it seem so silly to get your required macronutrients from canisters of animal by-products, the cashier at the store would raise an eyebrow and question your sanity? Consider these questions the next time you think about buying powders made from cow secretions for proper nutrition. How about eating something from a garden instead? Not only is it a much healthier choice, but fresh produce is a lot more appetizing, too.