Join now
Topics » How To » Food Choices: What to Avoid and Why 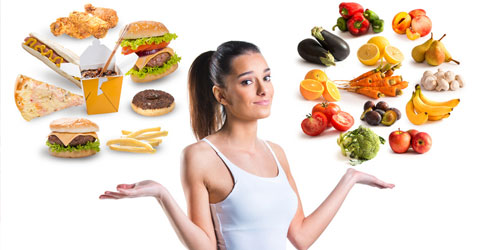 Food Choices: What to Avoid and Why

There is a huge industry telling you that what you eat has no effect on your health!

Eating is one of our most basic and powerful drives. And while eating has been woven into many cultural and religious practices, essentially we eat to survive. There are many basic requirements of life that we can get only through our diet. We need a source of fuel or calories; we need protein, essential fatty acids, vitamins, minerals, fiber, and water.

There is a huge industry in this country that is trying to convince us that it doesn’t matter what we eat. We are told that any combination of heated, treated, processed, chemicalized “foods” will meet our nutritional needs so long as we take plenty of vitamin pills, heartburn medicine, and headache remedies. There is another huge industry that is trying to convince us that what we eat has no effect on our health.

If these same forces were selling fuel for your car, they would try to convince you that your car would run just fine on any fluid so long as you could get it into the gas tank. Then, when you took your car back to the guy who said that it would run fine on coffee ice cream and you complained of pinging and a fouled up carburetion system, he would keep you waiting for two hours and then tell you that it was “probably all in your head,” that you should “learn to live with it,” ask “What do you expect at your car’s age,” then announce “there’s nothing that can be done.”

At the turn of the century people died before they reached their genetic potential because of acute diseases. Tuberculosis, pneumonia, and gastrointestinal diseases were leading causes of death. Due to changes in public health measures, improved nutrition and medical treatment, acute illness is no longer a leading cause of death. Today, people die from chronic degenerative disease.

What do all of these conditions have in common? They are caused or massively influenced by the food choices we make-what we put or don’t put into our mouths.

What to avoid and why

Of all the things human beings put in their mouths, tobacco, alcohol, caffeine, recreational and prescription drugs are perhaps the most harmful. The seemingly endless and varied attempts by people to modify their internal chemistry through powerful chemical agents is an ever widening tragedy. In my practice I treat more people who are suffering and dying from the consequences of using and abusing chemicals than I care to think about. We all need to remember that headaches are not caused by an aspirin deficiency and that there are more productive ways of modifying our moods than with pills, potions and elixirs.

Perhaps the second most destructive habit I see is the use of animal products. Meat, fish, fowl, eggs and dairy products all have much in common. In addition to the well-documented health reasons, there are economic, environmental, humanitarian-and, for many, spiritual reasons that support the adoption of a vegetarian diet.

Not designed for meat

Of all the animals that include meat in their diet, man is the only one that is unable to break down uric acid to allantoin. This is due to the fact that man does not possess the necessary enzyme, uricase. This inability to break down uric acid leads to an increased possibility of it accumulating in the body when animal products are eaten. Uric acid is an intermediary product of metabolism that is associated with various pathological conditions, including gout.

The human liver, unlike the livers of carnivores, can only process a limited amount of cholesterol. If significant amounts of animal products are consumed, cholesterol levels rise, along with an increased risk of developing atherosclerosis. Clearly, either we were not designed to eat animal products or we somehow have the wrong kind of liver.

In addition to the above “naturally occurring” problems with animal products, a multitude of chemical agents-such as carcinogenic nitrates, etc., are added to animal products to slow down their decay, improve their color, and alter their taste.

In addition to parasites, bacterial infestation, toxic poisons, carcinogenic agents, and free radicals, animal products all suffer from the problem of biological concentration. Animals consume large quantities of grain, grass, etc., that are, to a greater or lesser extent, contaminated with herbicides, pesticides, and other agents. In addition, animals often are fed antibiotics and treated with other drugs and toxic agents. These poisons concentrate in the fat of the animal and are present in an animal’s milk and flesh. This biological concentration of poisons poses significant threats to the health of humans who consume animal products.

As if this weren’t enough, animal products are completely devoid of fiber and are extremely high in protein-and in spite of what millions of dollars of meat and dairy industry advertising would have you believe, it is excess, not inadequate protein, that is the threat to health. Excess protein, especially the high sulphur containing amino acids found in animal products, has been strongly implicated as a causal agent in many disease processes, including kidney disease, various forms of cancer, a host of autoimmune and hypersensitivity disease processes and osteoporosis.

Osteoporosis is a condition common to postmenopausal women. Bones become weak and fracture easily. Osteoporosis is not caused by a calcium deficiency, and calcium supplementation does not prevent it. In osteoporosis there is a loss of the bone matrix that holds calcium.

It is ironic that the chief argument used to promote the use of animal products-the purported need for large quantities of protein-is one of the greatest reasons for avoiding them. If animal products are included in the diet in significant quantities, it is virtually impossible to design a healthful diet that is consistent with the overwhelming bulk of evidence in the scientific literature dealing with nutrition.

Because animal products are so high in fat, segments of the “food” industry are advertising their products as “lower” in fat. Because of this advertising, some people want to believe that if they change the color of their meat from red to white or if they remove the skin of the animal before eating it, they can avoid the toxic fat.

There is very little difference in the amount of fat per calorie in fish versus fowl versus beef. If you want to see big changes in your health, you must make big changes in your life. Token changes don’t work. Only dramatic reduction or elimination of all animal products merits your consideration.

A women recently was referred to me for nutritional counseling by her gynecologist. I reviewed her history, performed a physical examination and was explaining the dietary recommendations I had prepared for her. She interrupted me and said, “Look, doctor, I knew I was coming here for nutritional advice, but I didn’t know I would have to eat differently.”

Many times patients ask me, “If I have to avoid drugs including alcohol, coffee, cola and chocolate; animal products including meat, fish, fowl, eggs and dairy products; and oil and refined carbohydrates-what’s left?”

The answer is: a diet derived exclusively from whole natural foods-fresh fruits, vegetables, whole grains, and the variable addition of nuts, seeds and legumes.

Part of it is genetics-we are programmed to eat concentrated foods when they are available. That is an important survival trait. In a natural setting, there are no chocolate chip cookie trees, candy vines or burger bushes. But today, surrounded by unlimited access to concentrated foods, we must overcome our instincts with our intellect.

To eat well, we have to understand the factors that drive us to keep eating wrong. Very often we eat for the wrong reasons. We might eat because we are emotionally distraught. We might feel fatigued and eat for stimulation. But when we are tired, we should sleep.

Fear of being different is another factor that drives us to make poor food choices. “Friends” can create a lot of cognitive dissonance. “You’re no fun anymore!” “It’s not healthy to be a fanatic!” “You’re so thin!” “Don’t you think you’re carrying this a little too far!” “I made it just for you!” and “A little won’t hurt!”

Once at a lecture I gave, a woman in her 80s stood up and told the group that when she was in her 40s she was very ill. Because conventional treatments failed her, as a last resort she tried fasting and changing her diet. It worked! But some of her friends were so critical of her new lifestyle that she eventually stopped seeing them. I asked if she felt that it was a great loss, but she said, “Oh, no, dear. They all died years ago.”

Enjoy your food. But remember, food is fuel. There is more to life than food. Don’t live to eat. Eat to live.