Register now
Topics » Disease » What Are FODMAPs in Foods? If You Suffer From Bloating or IBS You May Be Sensitive to FODMAPs

What Are FODMAPs in Foods? If You Suffer From Bloating or IBS You May Be Sensitive to FODMAPs 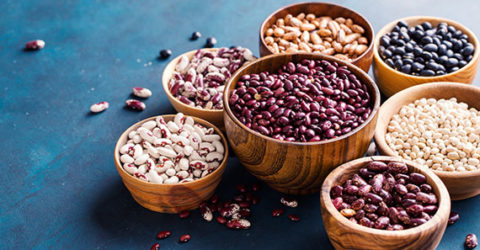 It’s not unusual to experience some bloating when switching to a plant-based diet due to the sudden increase in fiber intake. However, bloating that persists or seems to manifest only after eating certain foods could mean you’re sensitive to FODMAPs, a group of carbohydrates found abundantly in many plant foods.

FODMAP stands for fermentable oligosaccharides, disaccharides, monosaccharides, and polyols. These short-chain carbohydrates and sugar alcohols include:[1]

During digestion, enzymes break the bonds in carbohydrate molecules so that they can be absorbed in the small intestine. The degree to which this happens with FODMAPs varies from person to person, and the sugars that don’t get broken down travel to the colon intact, pulling water into the intestines along the way.[2] Inside the colon, gut bacteria quickly ferment FODMAPs and produce gasses such as hydrogen, carbon dioxide, and methane. This natural process can cause serious discomfort for some people, particularly those suffering from digestive disorders like irritable bowel syndrome (IBS).

People with IBS are more likely to have adverse reactions to FODMAPs than healthy individuals, perhaps because their bodies are more sensitive to the distention caused by the increased volume of gas and water in the intestines.[3] Called visceral hypersensitivity, this can trigger symptoms like:[4]

Because FODMAPs are fermented in the colon, it can take anywhere from several hours to a couple of days for symptoms to manifest after consuming high-FODMAP foods. When symptoms appear shortly after eating, it’s often because the peristaltic action of digestive muscles triggered by the incoming food moves previous meals further along the GI tract.[5] Receptors in the gut activate in response to the resulting distention, which causes symptoms to occur.[6] Healthy foods tend to exacerbate the problem, and many people feel better after a bowel movement clears the offending sugars from the digestive tract.[7]

If you suspect you’re sensitive to FODMAPs, keeping a food diary for several weeks is the best way to monitor symptom patterns and identify suspect foods.

Cutting down on FODMAPs can be beneficial for people with IBS and others who exhibit symptoms of sensitivity. Consuming fewer FODMAPs minimizes the amount of water drawn into the intestines during digestion and reduces fermentation action in the gut. One specific protocol, developed by Monash University with the goal of controlling IBS symptoms, has three stages:[8]

Up to 86% of IBS sufferers who stick with the diet experience improvements in their symptoms.[9] The diet has also been used to address other functional gastrointestinal disorders, as well as specific conditions like small intestine bacterial overgrowth (SIBO).

Following a low-FODMAP regimen can be a challenge on a plant-based diet because so many common foods are inherently high in these sugars. A food is considered “high FODMAP” if it contains more than a predefined amount[10] of oligosaccharides, disaccharides, monosaccharides, or polyols, and some of the biggest offenders are staples in many plant-based meals.[11]

Foods highest in FODMAPs include:

There are, however, many low-FODMAP alternatives:

This list is by no means comprehensive, and not all foods on the high-FODMAP list are completely off limits. Some only trigger symptoms when eaten in large quantities, and processing methods such as canning or sprouting can also reduce FODMAP levels.[13] Monash University released an app to aid in adhering to the low-FODMAP diet, which includes acceptable serving sizes and detailed information on the types of FODMAPs found in various foods. A quick-reference PDF of foods to eat and avoid is also available from The Vegan RD.

Because reducing FODMAPs cuts out a significant number of foods that provide key nutrients on a plant-based diet, there may be some risks involved in limiting your intake. Consuming less of the prebiotic fiber on which beneficial bacteria feed can lead to alterations in your gut microbiome, which may result in unfavorable imbalances. For people prone to disordered eating, the severe restriction involved in the early stages of the diet may trigger more extreme or dangerous behaviors.[14]

Due to these potential risks, it’s important to work with a dietitian or nutritionist to create healthy, nutrient-rich meal plans for the elimination and reintroduction phases of the low-FODMAP diet. Bloating that doesn’t go away or gets worse may be the result of another condition, so continue to monitor your symptoms, and let your doctor know about any unusual or uncomfortable changes.

The Fiber Dilemma – Eating Plant-Based Without...

How Do I Avoid Gas and Bloating on a Plant-Based Diet?

Why Your Microbiome May Be to Blame for Your Bloating...