Topics » Nutrition Science » Why Are We Living Shorter Lives? 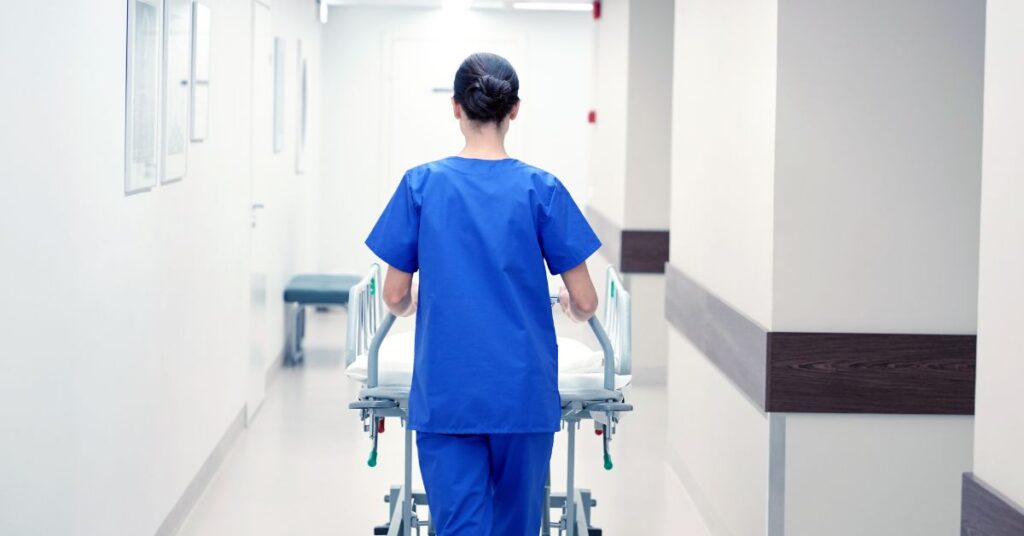 Life expectancy as an indicator of health is limited. It’s possible to live longer without necessarily living better or more healthily, and no one wants to spend their final years—or decades—suffering from disabling or painful diseases. That’s why a more useful statistic is health-adjusted life expectancy (HALE), which accounts for years lived in less than full health.[1]

Nevertheless, changes in life expectancy can help us assess our collective health history. And there are a few lessons we can glean from the long-term trends.

Life expectancy has lengthened considerably throughout most wealthy countries since at least before the mid-19th century. Beginning in 1840, life expectancy at birth increased by about three months per year.[2] But most of that increase was due to reduced infant and childhood mortality. It wasn’t until almost 1960 that increases in life expectancy slowed down and: “depended on increasing survival among the older adult population”. In the US, for example, “the probability of a 65-year-old surviving to age 85 doubled between 1970 and 2005.”

So, life expectancy gains in the 19th century were due to a reduction in childhood infectious diseases; even most deaths at the turn of the 20th century were the result of infection, so reducing the dangers of infection increased our chances of survival. Conversely, “when chronic diseases dominate deaths,” as they have in recent decades, “people often live with diagnosed disease and with treatment for long periods of time.”

This is something our medical system has excelled at—managing chronic diseases so that we live longer. (Not necessarily reducing the incidence or reversing the disease conditions, but prolonging survival.) Cardiovascular disease (CVD) provides probably the most obvious example: for over five decades, the chances of surviving a heart attack have consistently increased. Indeed, our medical system’s ability to reduce mortality rates from CVD accounts for about 60% of the increase in life expectancy from 1970 to 2000!

Here are a few statistics that illustrate these trends (see charts below for sources): 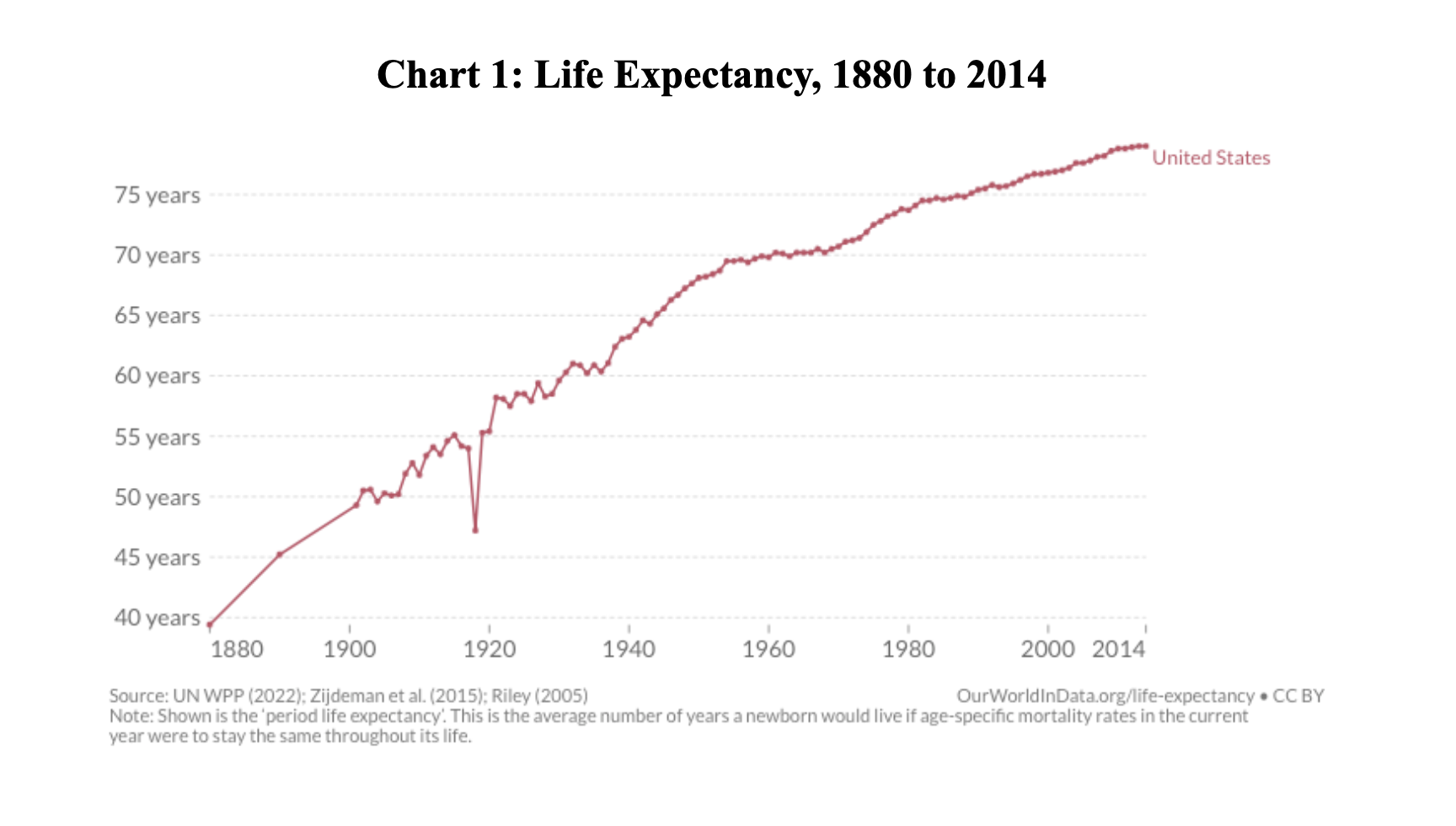 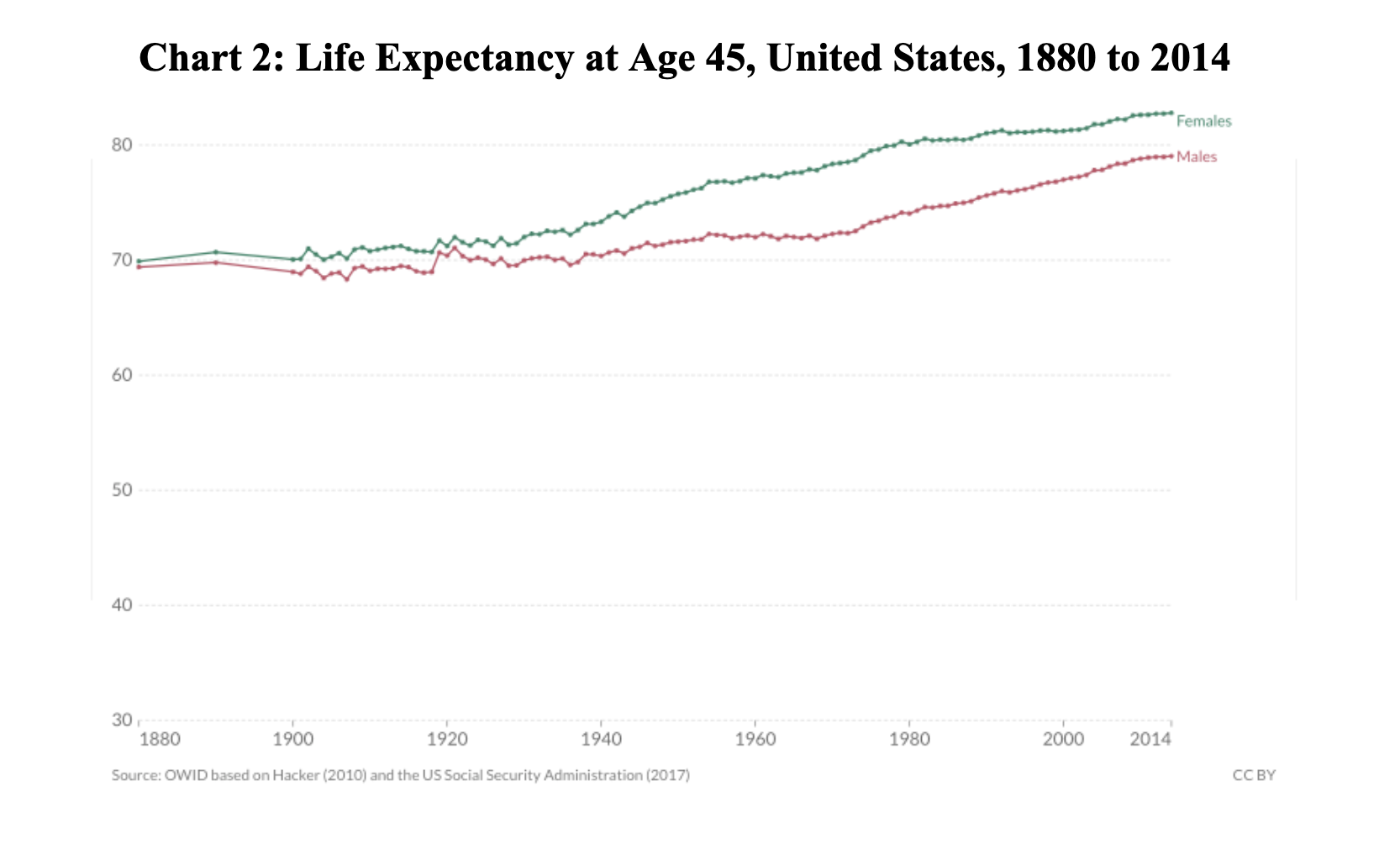 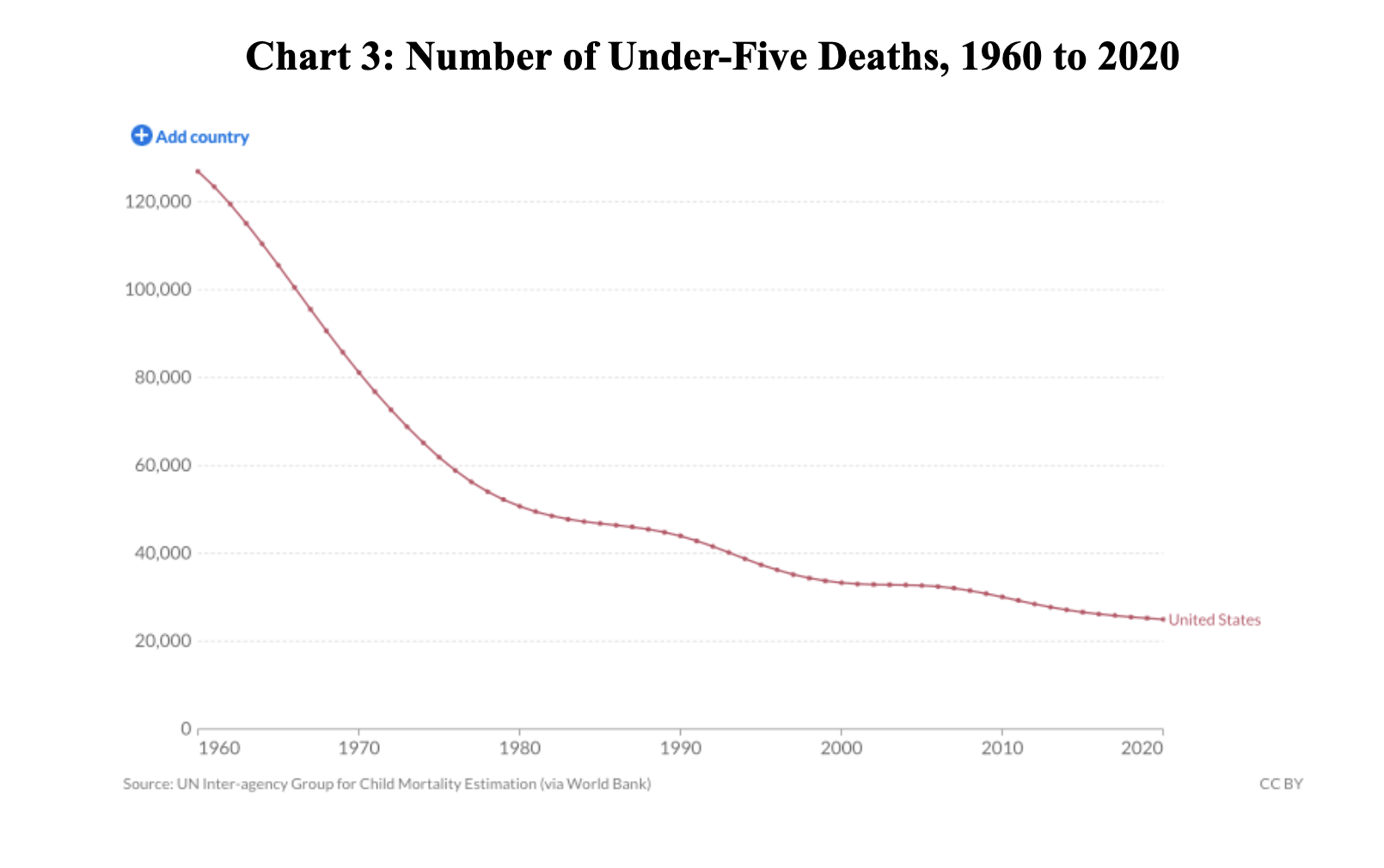 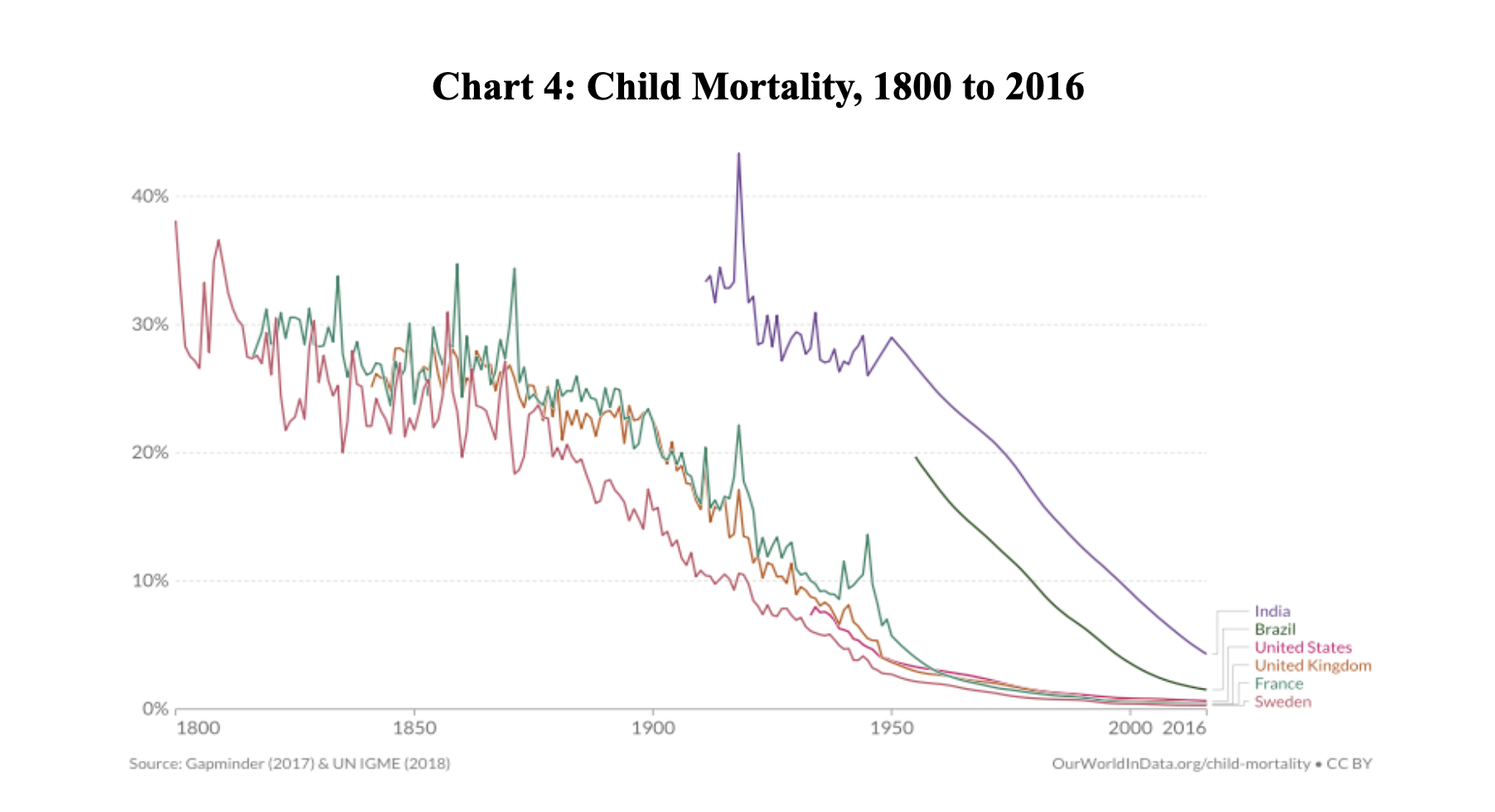 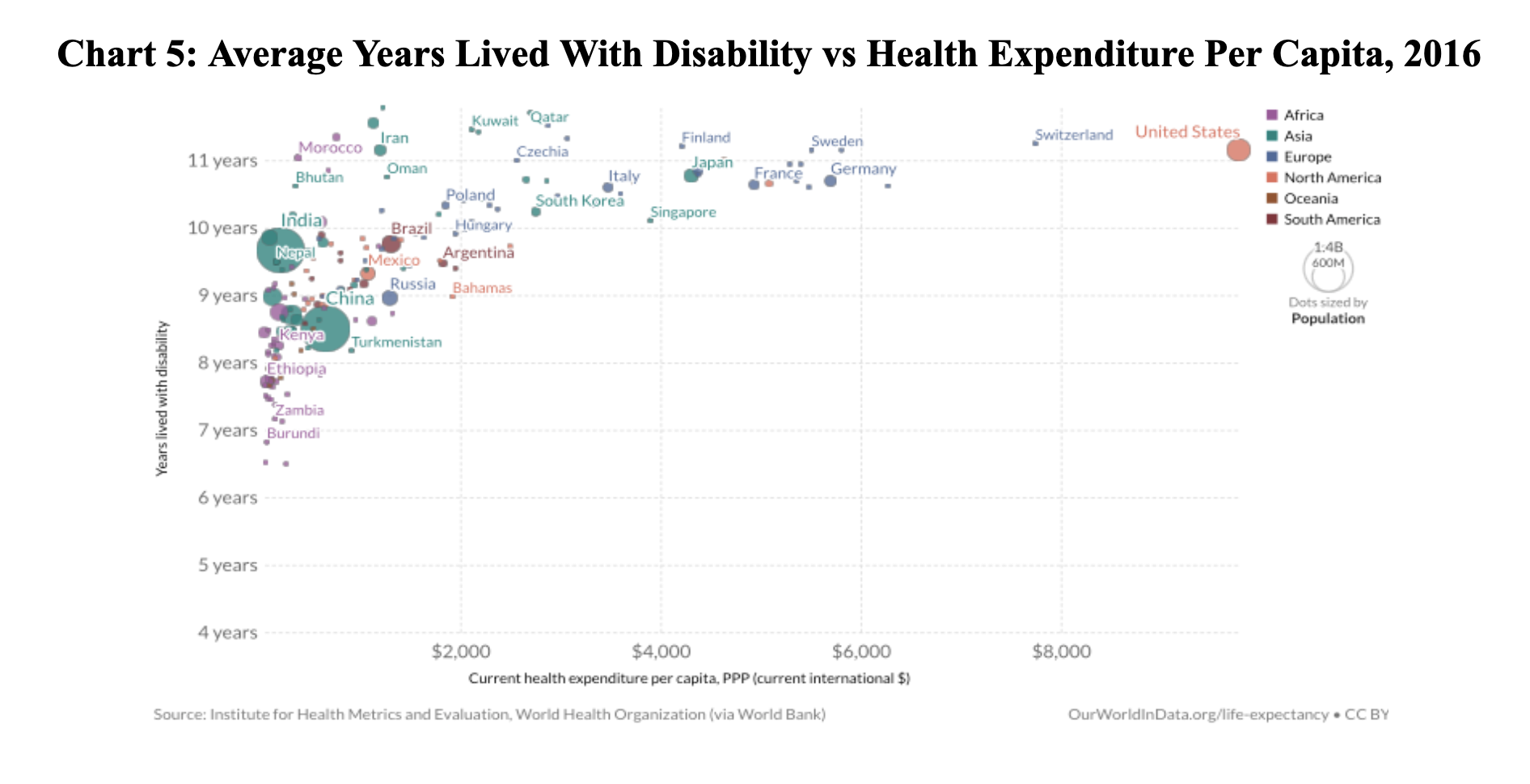 This final point demonstrates why the compression of morbidity hypothesis is so appealing. This is a decades-old public health idea developed by Stanford professor of medicine James Fries that suggests the burden of lifetime illness might be compressed into a shorter period before death.[3] Unfortunately, researchers since have empirically demonstrated the opposite.[2] They conclude: “When morbidity is defined as major disease and mobility functioning loss [. . .] compression of morbidity may be as illusory as immortality.”

So, there may be valid concerns about the compression of morbidity theory, but overall, we’ve enjoyed significant gains in the past two centuries. What about more recently?

The COVID pandemic—and this won’t come as a surprise to anyone—severely affected life expectancy. What might surprise you is that even before the pandemic, life expectancy in the US was already struggling. From 2013 to 2017, life expectancy decreased (Chart 6), lagging behind most other high-income countries. And this gap widened during the pandemic,[4][5] which researchers have attributed to the coinciding opioid epidemic and increasing “deaths of despair”—overdoses, suicides, alcoholic liver disease, etc. 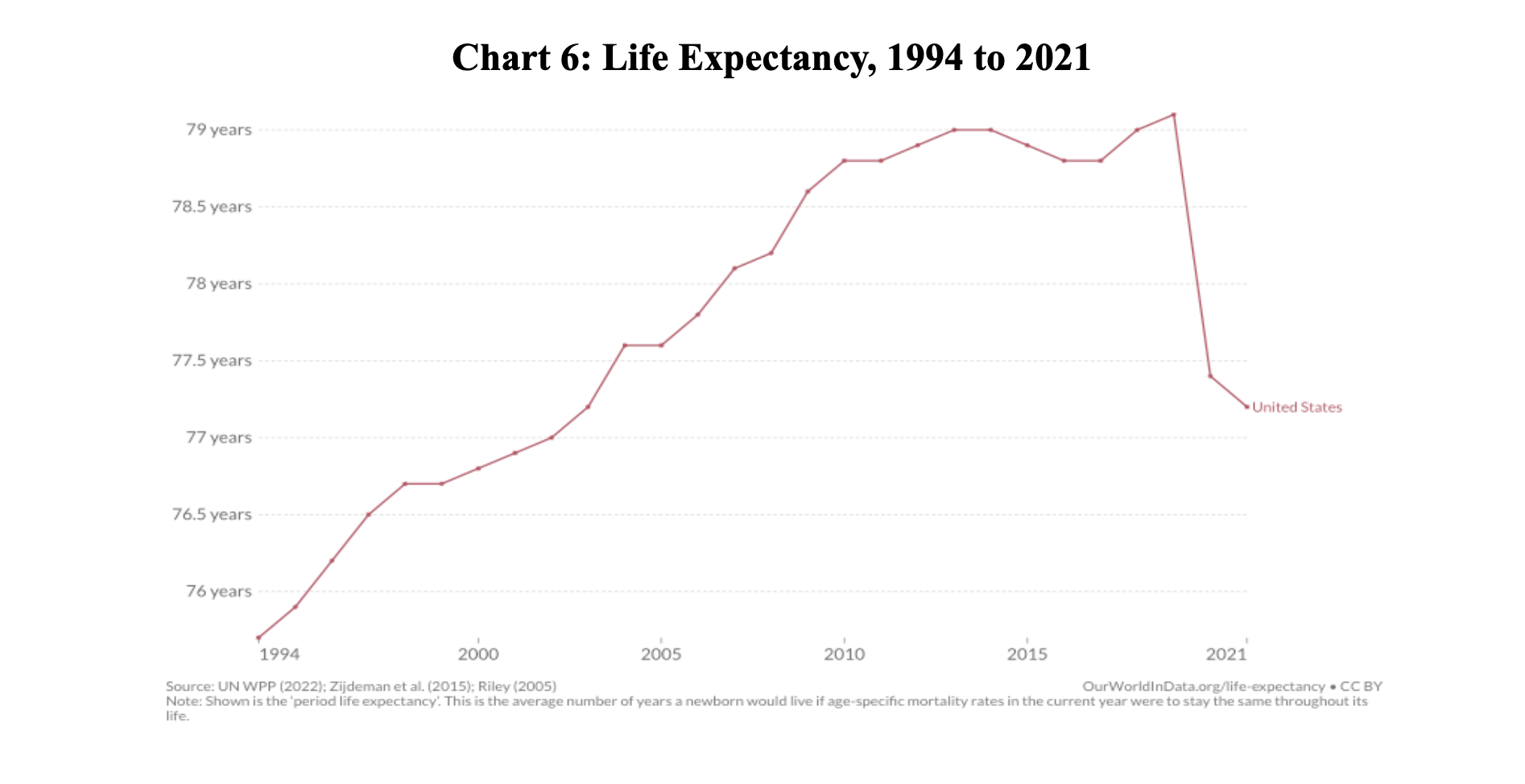 This backslide can also be linked, at least in part, to preventable lifestyle-related diseases, which might contribute to profound physical, psychological, and economic distress.

To answer the question posed by the title of this article, then: there are numerous reasons we are living shorter lives. This suggests a multi-pronged approach might be the best way to get back on track and continue to extend life expectancy.

A 2021 article published in Annual Review of Public Health criticized the “deaths of despair” narrative and suggests a more targeted focus on the primary drivers of the life expectancy decline, including:

As they conclude: “Big-picture narratives are often compelling because of their simplicity and ability to explain it all, but they risk missing the trees for the forest.” If nutrition can play a role in pruning some of those trees, it can help reverse the troubling trends of recent years. Although, “substantial strides have been made in dealing with the consequences of disease,” we still have a long way to go to prevent, delay, or eliminate chronic diseases. The incidence of a first heart attack didn’t change very much from the 1960s to the 1990s, even though we greatly improved our ability to respond to that crisis.[2] The next step is to prevent it altogether. And that’s where nutrition can play a profound role.