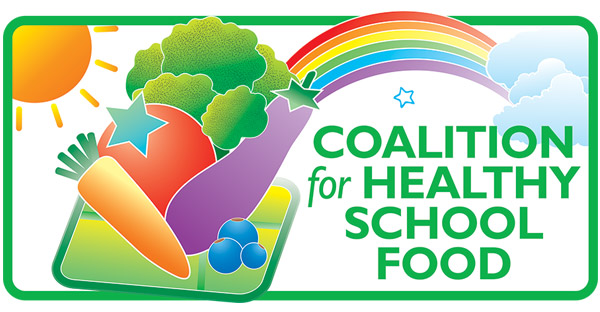 To be compliant with the United States Department of Agriculture School Meal Program, each lunch must offer five components: vegetable, fruit, protein, grain (must be 50% whole grain – which is called 100% whole grain rich, and may contain preservatives and high-fructose corn syrup), and milk.

To be reimbursed by the federal (and sometimes state) government, schools must serve at least three of the five components, and one of the three components must be a vegetable or a fruit. A positive development is that there are new regulations and the vegetable component of the meal must include the following types of vegetables served at least once each week: green, red/orange, legume, starchy, and other (cauliflower, cucumbers, or one of the aforementioned veggies). One of the challenges with this regulation is that schools may offer 100% fruit juice as a fruit, so a student can leave the line with a compliant meal consisting of a cheeseburger on a half white bun and a carton of apple or orange juice.

Even though a reimbursable meal could consist of a vegetable, a fruit, and a grain, due to the very short meal times and need to get children through the lunch line quickly, often the trays are pre-plated with the protein component of the meal (in the school food world, this is called the meat/meat alternate component), so as children come through the serving line, this is what is available.

Even though there is a new focus on fruits, vegetables, and whole grains, many schools offer numerous protein component options, so the fruit and vegetable options seem skimpy in comparison and frequently do not look very appealing. If we want our kids to eat healthy food, it should be beautiful, and it must taste good. Additionally, many adults face food challenges – given that as many as 7 out of 10 are overweight or obese, how can we expect our children to make the best choices?

Regarding milk, it must be offered but does not need to be taken. It would literally take an act of Congress to change the fact that milk must be offered. Research indicates that: children who consume the most milk as children may have the highest levels of colorectal cancer as adults, children reverse regular constipation when they give up milk, and that much of the population is lactose intolerant (a normal condition, as digesting milk after weaning is not natural). It does not make health sense to require that milk be offered. In addition, even though there is no reason for children to drink a glass of white liquid, schools may, but are not obligated to offer soy milk, but only with a doctor’s or parent’s note.

Despite the new regulations for school meals which took effect in September of 2012, schools may still serve a number of highly processed and unhealthy food – for example, pizza with pepperoni or sausage, yogurts with artificial colors that are very high in sugars (often high fructose corn syrup), and many cheese dishes – cheese is very popular in school meals. Scanning the aisles at the conferences held for school nutrition professionals, one will see that school food is big business, and that the vast majority of the foods available are highly processed. We still have a lot of educating to do – just because something meets calorie, fat, and sodium guidelines does not make it a healthy choice. Schools also have access to what used to be called commodity foods – now renamed USDA Foods. Despite widespread misunderstanding, these foods are not excess foods the government is trying to get rid of – they are specifically grown/raised for the commodity program. Bonus commodities are foods that are extras – a few years ago a nice bonus food was frozen cherries. So it’s not all bad – other healthy commodity foods include: dried or canned beans, brown rice, and other healthy plant foods. However, the food comes on big rig trucks to central distribution points, so schools from neighboring districts must agree to what they want and just because brown rice is theoretically available, doesn’t mean they can get it unless other schools nearby want it too. Most schools want the most “bang for the buck” and so use a high percentage of their commodity allotments on meat and cheese.

One of the most exciting, and yet most shocking developments is that schools must now offer children free water. That’s right! Free water. This actually had to be written into the Federal Child Nutrition Act as law (this law is updated every five years). If schools don’t have a water fountain in the cafeteria, they must supply a free water source. Now the next step is to get the schools to allow the students to get up from their tables to get the water – this is still a challenge in many elementary schools. And those that only have water fountains really need to have a table with cups next to it, so that children can get a decent amount of water to drink.

Schools also have new guidelines for snacks, which were implemented in September, 2014. These guidelines include calorie, fat, sugar, and sodium limits. Just like with meals, these guidelines still allow for highly processed choices, and in high schools, a compromise allows diet sodas in schools (but not regular sodas). Thus, a huge number of teens will begin to consume artificial sweeteners. Nowhere in the regulations are artificial colors, flavors, preservatives, or artificial sweeteners prohibited. In addition, transfats are also allowed, because the laws governing nutrition fact panels allow up to ½ gram per serving to be rounded down to “0”. This is not specific to schools, but to nutrition facts panels. You can be sure to avoid transfats by avoiding the words “partially hydrogenated” on the ingredients label.

Schools have made improvements in recent years and food service personnel work hard to feed the children. The challenges that exist are not their fault, so if you want to change the food in schools, find a way to help, not criticize them. They are working with strict regulations and tiny budgets.

Children are our future – and though they may prefer unhealthy processed foods if that’s what they were brought up on, it’s time for adults to recognize that they are in charge. If unhealthy food isn’t available, children will start eating healthy food – and feeling the benefits of it in a very short period of time. To get involved with changing how schools feed kids, check out our website at healthyschoolfood.org and contact us.