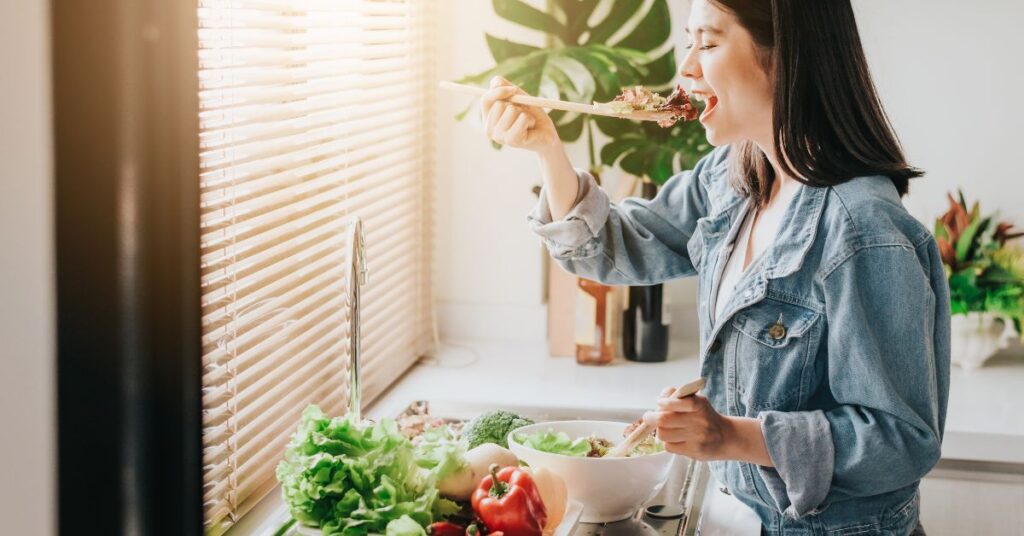 Doctors, other experts, and conventional wisdom often say that animal products are essential components of a healthy diet. This majority view implies that humans are omnivores. But what do our bodies say?

The China Study and numerous other international studies show that whole food, plant-based (WFPB) diets provide the optimal foods for humans, minimizing chronic diseases (which kill 75 percent of people in the US) and maximizing health, longevity, and vitality.

This article shows that humans are anatomical herbivores, not omnivores. That is why humans thrive on WFPB diets. The information in this article is based on my book, Sustainable Food Production and Diet.

Some people argue that humans historically ate animal products. Therefore, they must be natural and healthy. There are many reasons why humans would eat animal products when they are not the optimal foods for us. For example, as original people migrated north, they often ate animal products to survive because adequate plant products were not available.

In The China Study, Dr. T. Colin Campbell describes how all nutrients, including protein, are better supplied by plants. But some nutrients, such as fat and protein, often are more concentrated in animals. This can make hunting animals easier than gathering plants for short-term survival (but worse for health and longevity).

There is strong cultural pressure to eat animal products. Many people were raised on them. Religions often say that God put animals here for humans to use and eat. The US Dietary Guidelines say that animal products are part of a healthy diet. Food companies regularly publish biased research that shows animal products to be healthy. Medical training often teaches doctors that these foods are healthy.

All herbivores can digest and utilize some animal protein. As intelligent, higher life forms, humans have the ability to vary our behavior and diets. But just because we can survive by eating animal products, or enjoy eating them, does not mean that they are optimal, healthy foods for humans.

Anatomy trumps everything, including beliefs and food preferences. Anatomical features are observable facts. They objectively show the types of foods we and other creatures evolved to eat, and thereby thrive on. The following discussion shows that humans are herbivores by comparing the anatomical features of carnivores, omnivores, and herbivores[1].

Carnivores and omnivores have wide mouth openings relative to head size and jaw joints on the same plane as the teeth. The lower jaw cannot move forward or backward and has limited side-to-side motion.

This strong, stable jaw is necessary for capturing, killing, and dismembering prey. Herbivores and humans have relatively small mouth openings and jaw joints above the plane of the teeth. This makes our jaws much weaker and therefore less effective for capturing and killing prey, but does provide the front-to-back and side-to-side mobility needed to crush and grind fibrous plants.

Carnivores and omnivores swallow food whole or simply crush it and have no digestive enzymes in their mouths. Herbivores and humans require extensive chewing and have digestive enzymes in their saliva. Carnivores and omnivores have a wide esophagus that can handle whole chunks of meat. Herbivores and humans have narrow esophagi best suited for swallowing small, soft, thoroughly chewed balls of food. When humans attempt to swallow large chunks of meat, they risk choking.

Carnivores and omnivores have large stomach capacities (60 to 70 percent of the digestive system). Herbivores and humans have smaller stomach capacities (less than 30 percent of the digestive system). Meat, especially decaying flesh, often has abundant pathogens. Carnivores and omnivores have high acid stomachs (about 1 pH) that kill pathogens, whereas herbivores and humans have low acid stomachs (4 to 5 pH). No animal cooks food except humans. This innovation helps kill pathogens in meat and compensates for the lack of a high acid carnivorous stomach.

Focusing on the anatomical features that differentiate carnivores and herbivores, humans have virtually no similarities to carnivores and no differences from herbivores. The only similarities we have to omnivores are the parts adapted to eating plants, such as flat molars. Humans’ mouths, jaws, teeth, throats, and digestive systems have not evolved to capture, kill, tear, swallow, and digest animals. Some of our closest relatives, gorillas, consume an optimal diet of 97–100 percent plants[2].

The human ability to think, rather than anatomical features, enabled us to capture, cook, and eat meat. But anatomy, not tradition or intellectual capacity, indicates the optimal diet. Based on anatomy, humans are raw food herbivores. We evolved to eat raw plant foods. Significant variations from these optimal foods often will produce suboptimal health or illness.

Some Chinese and Ayurveda dietary philosophies say that humans are biochemically unique. Therefore, optimal diets should vary based on individual characteristics. But this is misleading. There are minor biochemical differences and other factors such as food allergies that indicate optimal diets should vary between individuals, but we mostly are the same. We all have essentially the same teeth, mouths, and digestive systems. None of these anatomical features evolved to eat animal products.

Anatomical features and extensive independent research comparing the health impacts of plant and animal products show that humans are herbivores. As a result, WFPB diets are the optimal diets for humans.

How to Get All Your Vitamins and Minerals From...