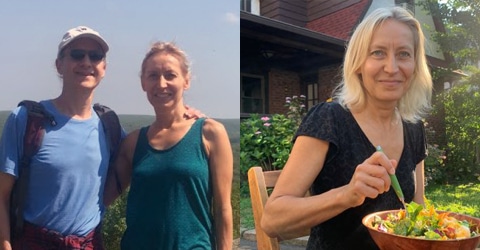 Autoimmune Disease and Prednisone Side Effects

In September 2013, without any warning, my left ear swelled up and became excruciatingly painful. My ear was so sensitive to touch that even one single hair or light current of air would make me almost scream in pain. After visiting several confused doctors, I was finally diagnosed with a rare autoimmune condition called relapsing polychondritis (RP).

Few people have heard of RP. It is an autoimmune disease characterized by recurrent, increasingly destructive episodes of extremely painful inflammation of cartilage throughout the body — ears, nose, eyes, joints, and eventually, larynx and trachea. It is usually debilitating (cauliflower ears, saddle nose, blindness, deafness…). Over time, it can be life-threatening, particularly when it moves into the respiratory system.

When I inquired about how to treat my condition, my doctor’s words inspired little confidence:

“We don’t know what causes RP. It’s incurable and cannot be reversed. We can only manage it with drugs. The drugs will most likely eventually stop working, but once that happens, we will try some stronger drugs.”

He prescribed me prednisone, an immunosuppressive corticosteroid that is often the physician’s go-to choice for dealing with autoimmune conditions. Then, he wished me luck and sent me on my way.

The prednisone reduced the swelling in my ears almost immediately. Inconveniently, it also made me want to kill myself, along with a host of other similarly undesirable side effects. The prospect of being on this nightmare drug — or even stronger ones with more onerous side effects — for the rest of my life was a fate that I could not bear to even consider.

Since my doctor seemed to have no idea how to cure this disease, I began to research it myself. The results were not encouraging. Hundreds of studies had been conducted about this rare condition, and it appeared that a fairly rapid degeneration of the body, slightly eased by the use of drugs with awful side effects and invasive surgeries, was all that the medical establishment had come up with.

Rather than relapsing, my polychondritis seems to have disappeared, and my health has improved in so many other ways, as well!

It was pure luck that led me to Sabrina Nelson’s webpage. Sabrina was the only person I could find who had documented a full recovery from RP, and she had done it without medication, simply by adhering to a healthy, low-fat, whole food, plant-based diet. From her webpage, I was directed to the writings of Drs. T. Colin Campbell and John McDougall. Further research led me to the writings of Drs. Brooke Goldner, Michael Greger, and others. One thing became clear to me: a whole food, plant-based diet had helped many others cure and reverse autoimmune conditions. Could it work for me? It was certainly worth a shot. What did I have to lose?

When I explained this to my doctor, he laughed it off with a dismissive wave, as if diet could not possibly have anything to do with this particular health condition. But I resolutely asked him to wean me off of prednisone, which he reluctantly agreed to.

How did it work out? Well, the results were even better than I could have dreamed of! RP is referred to as relapsing polychondritis because its symptoms recur, arising unexpectedly at any time — and they usually get progressively worse. For me, this has not happened. Since going vegan, I have had no further symptoms. Rather than relapsing, my polychondritis seems to have disappeared, and my health has improved in so many other ways, as well!

That was seven years ago. By now, I was supposed to be rapidly fading, possibly bedridden or deceased. Instead, I’m in great health and medication-free! Even better, the rest of my family soon joined me in adopting a whole food, plant-based lifestyle. My husband’s cholesterol dropped over 60 points within a few short weeks, and he was able to wean himself off of his statins. And my children are hale and hearty and proudly championing the importance of veganism in leading the fights for animal rights and against climate change!

Helping Spread the Knowledge in the Fight Against Autoimmune Disease

Over the last few years, I’ve dedicated myself to learning more about nutrition-based healing. I recently started a nutrition and health education practice in order to share the growing body of knowledge about the positive effects of a whole food, plant-based diet, and to help people manage a transition to the plant-based lifestyle. In addition to a certificate from the T. Colin Campbell Center for Nutrition Studies, I’ve also studied at Dr. McDougall’s Health & Medical Center, Wellness Forum Health, and several other leading sites supporting plant-based education.

It pains me to read about others who suffer from autoimmune conditions. I follow a few groups dedicated to RP and other conditions, and many members are in poor health and are fading fast. Now I’m excited to have the chance to use my knowledge to help others learn to cure their conditions and live a healthy life the way I have!