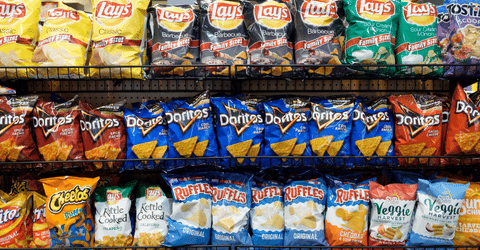 US food products contain over 3,000 and possibly as many as 14,000 additives.[1] These facilitate centralized, industrial food production and increase food company profits, for example, by extending shelf life and improving the taste and appearance of food. But they also often degrade human health. Many US food additives are harmful and banned in other countries. In addition, additives facilitate the production of processed foods. These often contain animal products, refined carbohydrates and high levels of fat, salt and sugar. They strongly promote obesity and chronic disease.

This article summarizes how weak US regulations allow extensive additive use and gives a few examples of widely used, but harmful additives. Adopting a whole food, plant-based diet protects and enhances health by minimizing consumption of processed foods and additives. This article is based on the book Sustainable Food Production and Diet by Frank Dixon.

Food additives include many types of artificial and natural flavors, artificial dyes, flavor enhancers, preservatives, fungicides, fruit and vegetable coatings, sweeteners, stabilizers, solvents, dispersing agents and nutrients. Synthetic chemicals and other substances added to food can cause many negative human health impacts. In Europe, food additives must be shown to be safe before they are used in food. But this frequently is not the case in the US.

A report by the US government Accountability Office (GAO) analyzed several ways in which the FDA’s food additive regulations fail to adequately protect public health.[2] Under FDA regulations, food companies are allowed to unilaterally assign “generally recognized as safe” (GRAS) status to many types of additives. Once a company decides that its additives are safe, it can use them freely without regulation. Companies often are not required to inform the FDA that they developed new food additives and assigned GRAS status to them.[2]

The FDA does not monitor whether companies are appropriately assigning GRAS status. It is supposed to amend or revoke the status if emerging science shows that additives are harmful. But this is difficult to do when companies do not inform the FDA that new food additives are being used. In addition, the GAO report noted that the FDA has not used new scientific information to systematically reconsider GRAS status since the 1980s.

The situation with food additive regulations once again shows the great extent to which business controls government in the US. Many citizens probably would find it unbelievable that companies are allowed to unilaterally declare food additives to be safe with no regulatory oversight. This would be like implementing self-regulation of traffic laws. For example, if a citizen noticed that they were speeding, they could pull over, write themselves a ticket, send in a check and request that points be added to their driver’s license. Obviously, not many speeding tickets would be written under such a system.

Even when safety testing of food additives is required, the FDA often relies on testing that was conducted, funded or influenced by the companies that made the additives. As discussed in Sustainable Food Production and Diet, this type of testing should not be used to determine public safety or use. A company’s research of its own products is not trustworthy. It is inherently biased because companies have large financial incentives to find their products safe when there are no immediate and obvious negative impacts and no cost-effective alternatives available.

Beyond relying on biased company testing, food additive safety testing fails to protect public safety in several other ways. For example, additives often are not tested for allergic reactions, hormone disruption and impacts on children. Perhaps most importantly, food additives virtually always are tested in isolation. But citizens rarely are exposed to only one food additive at a time. Several studies have shown that food additives which cause little or no harm in isolation can cause substantial harm when combined with other additives.[3] The typical US diet can expose people to 40 or more food additives per day in many different combinations. Virtually none of these combinations have been safety tested. In effect, US citizens are being used as laboratory test animals to determine the harmful effects of thousands of additives. 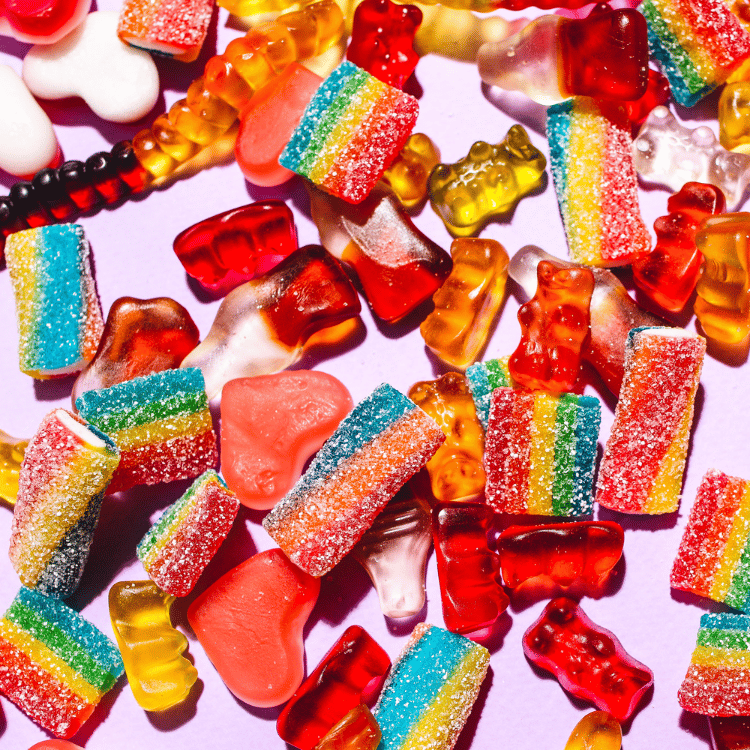 A few widely used, but often harmful food additives are summarized below:

Aspartame. Aspartame is a widely used artificial sweetener sold under names including NutraSweet, Equal and Canderel. It is used in over 6,000 products, including soft drinks, chewing gum and diet foods. The approval of aspartame once again illustrates inappropriate business influence of government. During the 1970s, the FDA did not approve aspartame because many studies showed that it caused seizures and brain tumors in laboratory animals.[4] In 1980, a public board of inquiry appointed by the FDA concluded that aspartame could cause brain tumors, and therefore should not be approved. In 1981, a new FDA Commissioner overrode FDA experts and approved aspartame. The Commissioner left the FDA shortly afterwards and took a job with the main public relations firm servicing the manufacturer of aspartame.

High Fructose Corn Syrup (HFCS). HFCS is a widely used food additive and sweetener. Beyond sweet foods such as cookies and sodas, it is used in many other foods, including breads, condiments and pasta sauces. US citizens consume an average of about 45 to 60 pounds of HFCS per person per year.[5] Several studies found that HFCS contributes substantially more to obesity and type 2 diabetes than regular sugar. As a highly processed, unnatural food, HFCS can cause metabolic changes that prevent the body from burning fat normally.[6]

Sodium Nitrate. Sodium nitrate is added to most packaged meat products in the US, including bacon, ham, pepperoni, hot dogs and lunch meats. Meat often turns gray quickly. Sodium nitrate adds red color. It can keep packaged meats looking fresh and appetizing for months. When sodium nitrate is mixed with saliva and digestive enzymes in the human body, cancer-causing compounds called nitrosamines are formed. These sometimes are used to cause cancer in laboratory rats. In humans, sodium nitrate consumption has been strongly linked to brain tumors, leukemia and digestive tract cancers.[7]

Preservatives. Preservatives, such as BHA (Butylated Hydroxyanisole), are used to preserve foods including meats, fats, nuts, dehydrated foods, flavorings, desserts, beer and beverages. Preservatives inhibit mold and other organisms that result from the natural breakdown of food. They are toxic to many lifeforms, sometimes including humans. For example, the US Department of Health and Human Services classifies BHA as a probable human carcinogen.[8] 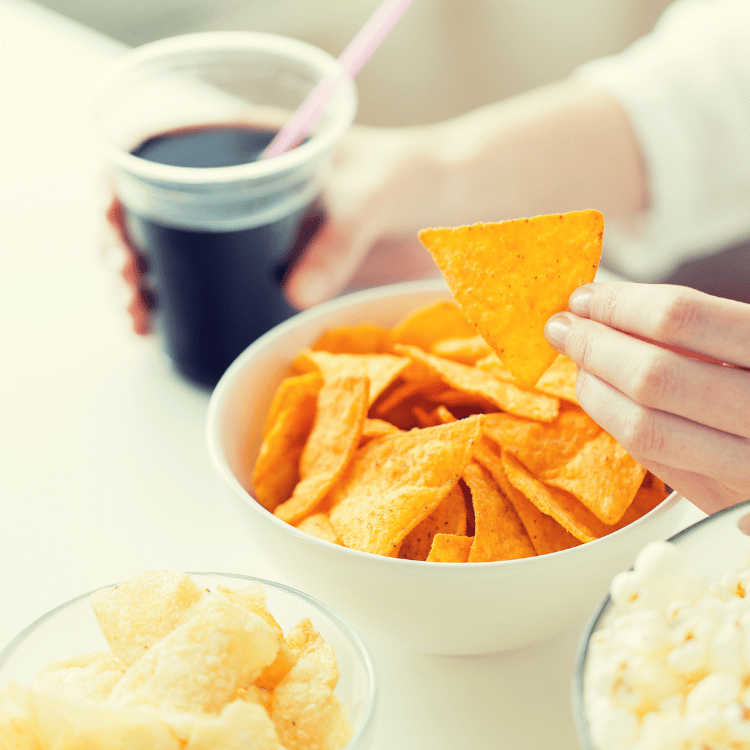 Natural and Artificial Flavors. Processed food represents about 70 percent of the US diet.[9] Food processing, for example through dehydration, freezing and canning, often destroys much of the natural flavor of food. As a result, chemicals frequently are used to add flavor. Much of the ‘taste’ of food results from the sense of smell. Natural and artificial flavors frequently combine volatile (i.e. off-gassing) chemicals in ways that mimic the natural taste and smell of food.

The terms natural flavors and natural flavoring are highly deceptive. For example, a strawberry flavored product might contain the ingredient “natural flavors”. This might lead many customers to believe that the product actually was flavored with strawberries and contained strawberries. However, this often would not be the case. Instead, off-gassing chemicals would mimic the flavor of strawberries. As Eric Schlosser said in his excellent book Fast Food Nation, processed foods might taste like shredded cardboard without natural and artificial flavoring.

Azodicarbonamide can induce asthma and cause other health problems. It is banned in most European countries. But it is included in many frozen food products in the US. The food dyes yellow #5 and yellow #6 are made from coal tar. They are linked to allergies, ADHD and cancer. These dyes are banned in much of Europe. But they are widely used in packaged macaroni and cheese and many other products in the US. As noted, the preservative BHA is a probable carcinogen. Another preservative, BHT, also is a known or probable carcinogen. BHA and BHT are made from petroleum. They are banned in England and Japan. But the preservatives are widely used in cereals and many other products in the US.[10]

Engineered nanomaterials (ENMs). ENMs are extremely small particles created by humans that do not naturally exist on the Earth. Little independent research has been done to determine the impacts of these materials on human health. In Europe and Canada, ENMs must have regulatory approval before they can be used in food. But in the US, food companies often are allowed to unilaterally assign GRAS status to ENMs, and then use them in food without informing regulators or consumers. For example, nano titanium dioxide is used in many vitamin, food supplement and food products. A UCLA study found that it causes genetic damage in mice and promotes cancer development. The International Agency for Research on Cancer lists the substance as a possible carcinogen to humans.[11] Weak GRAS regulations make it difficult to determine the volume of nano titanium dioxide and other potentially harmful ENM’s used in the US food supply.

Reducing consumption of additives and processed food is yet another one of the many benefits of switching to whole food, plant-based diets.