Topics » Nutrition Science » How Do You Like These Apples? 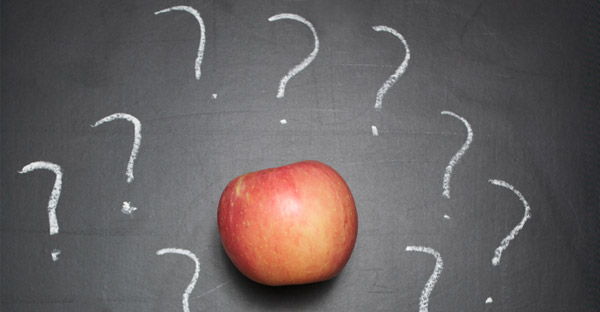 I am writing in response to George Johnson’s article in the New York Times An Apple a Day, and Other Myths dated 4/21/14. With this title, I am imagining that the New York Times is proposing to be our myth buster. They ought to know because they are, when reporting on diet, quite adept at perpetuating their own myths.

The author, begins by lamenting that “one source after another promotes the protective powers of ‘super-foods’, rich in antioxidants and other phytochemicals, or advises readers to emulate the diets of Chinese peasants or Paleolithic dwellers.” He then reminds us of the “divide between this nutritional folklore and science.”

I am not clear about which myths he laments. Is it about the notion of super-foods and super-nutrients? Or, is it about his perceived mythology of eating fruits and vegetables? Or, perhaps, is his concern about both issues, in which case he decides to call the whole mess, “folklore”?

For a starter, does his complaint about “diets of Chinese peasants” refer to our own nationwide project in rural China because I know of no other research that has been as widely quoted—and, I must say, wildly misquoted? Is his concern about plant-based foods, which he doesn’t particularly care about? Anyhow, who is saying that we should use the diets of Chinese peasants? I am truly confused as to what is his point? Or, perhaps, is his creation of confusion the main point?

On his concern about turning foods and nutrients into ‘super-foods’, he probably will be surprised to know that I have long warned against doing exactly this, that is, using our findings from rural China, for example, to conclude that there are so-called super-foods or specific nutrients in those super-foods that prevent cancer. Epidemiological studies of human populations do not allow for drawing conclusions from mere correlations and, further, individual foods and their nutrients generally do not biologically function in this way for the long term. To wit, I came to know this well when I spent three years during the 1980s at the request of the National Academy of Sciences testifying against such marketplace claims about nutrient supplements in U.S. Federal Trade Commission hearings. It is food and nutrient patterns that inform us far more than these substances acting in isolation.

Journalist Johnson then goes on to discuss a recent talk by the Harvard epidemiologist, Dr. Walter Willett, who directs the well-known Nurses’ Health Study and who recently summarized in a plenary talk at a “mammoth” cancer meeting that “there was little evidence that fruits and vegetables are protective or that fatty foods are bad”. Now, I think that I’m getting a better idea of his main concern: the shifting sands, as he might say, of the once acceptable recommendation to eat more plant-based foods.

I have two very disturbing reactions. I have known well the Nurses’ Health Study from its beginning (early 1980s) as well as Professor Willett’s conclusions from this research. This study has produced a large body of occasionally helpful evidence on dietary practices and human health and disease, especially cancer. However, this same study—and virtually all other epidemiological studies— investigates hypothesized dietary effects on health only within a range of nutritional exposure that severely limits detection both of the true health benefits of whole plant-based foods and the true health hazards of processed and animal-based foods. Both the standard American diet and most vegetarian and vegan diets represent ranges of nutrient exposure wherein almost all are high in fat, salt, refined carbohydrates and/or protein. None really explore the health effects of diets consisting of whole plant-based foods. Ranges of nutrient exposures provided by these foods are excluded from these studies.

Johnson also refers to the 1997 World Cancer Research Fund and American Institute for Cancer Research report, which advised consumers to consume more vegetables, fruits and grains, a report that I co-chaired (and Willett was a panel member). Ten years later, the same organization (with a different panel) backed off, according to this NY Times journalist, reporting that “in no case now [i.e., 2007] is the evidence of protection judged to be convincing” (the first 1997 report said this diet “might reduce the overall incidence of cancer by more than 20 percent”). What is the difference between the conclusions of these reports (one says there “might” be an effect while the other says it’s not “convincing”)? How does this lead to the conclusion that the evidence became weaker? The evidence did not become weaker. The weakness of epidemiological studies to detect a plant-based effect is the same in 2007 as it was in 1997 (referred to above). It’s always been this way and ten years makes no difference.

However, I do see a hint that the author might be learning something when he says, “trying to tweeze feeble effects from a tangle of variables, many of them unknown, inevitably leads to a tug of war of contradictory reports.” I suggest that this is a fundamental practice of reductionism in medical research that won’t go away especially when the study populations consume foods and produce diseases that maximize response, thus limiting detection of single agent causes and outcome effects.

No wonder, at the dinner reception for the annual meeting of the American Association for Cancer Research, the journalists “partook of a sumptuous buffet that included, among other fare, thick slabs of roast beef, a variety of rich cheeses and generous servings of wine.” Unfortunately, I have already concluded that we have a very sick system of creating and applying medical research, made even more so by the media. I don’t see its getting any better until we adjust our thinking as described in The China Study (2005) and Whole (2013).

And finally, some readers may think that I used the China-Cornell-Oxford project findings to make conclusions about the disease producing effects of single nutrients and/or foods. Please be assured that this was not the case; this is what others do with our data. The project in China was only one chapter in our 18-chapter book, The China Study. Although I had other reasons to do our project in China, my main objective was to consider whether the overall evidence in a human population supported our previous findings in the lab as well as those findings published by others.

So, I remain confused, not knowing which myths this reporter wishes to de-construct. It may come as a surprise to many that there never has been an acceptably comprehensive study of the breadth and depth of the effects of a whole food plant-based diet. The conclusions of the book, The China Study, represented our best attempt to summarize data from many sources, especially our own experimental findings. This was stated, in effect. Namely, the reader simply was asked to try it and the results that readers have since gotten have been quite astounding and supportive. Thus, the necessity of doing a formal study may be less necessary, except to clearly demonstrate for those who may wish to use out-of-context details to make a story or sell a product or service. One final advice to the reporter: how about your trying it and you will see what I am saying here.