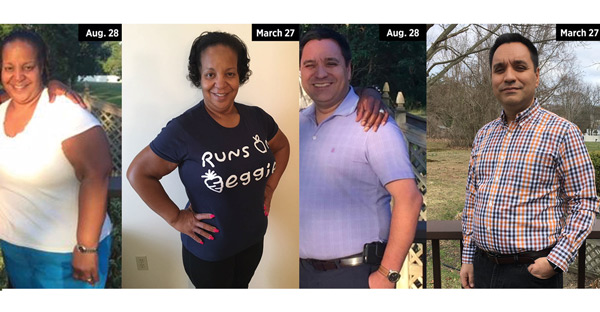 John has been a regular in my indoor cycling classes for a few years. I completed the Plant-Based Nutrition Certificate through eCornell in 2012 and received other training to be a certified health coach in May of 2013 and when I began promoting my health coaching services John responded one day. He told me that he thought I could help his wife Vera. Vera had struggled with her weight for years and tried several programs that either did not work or were not sustainable for one reason or another. I reached out to her and scheduled our first meeting in October 2014.

Vera’s energy, enthusiasm and willingness to try something new was refreshing. After listening to her story and understanding her goals, I introduced her to the health benefits of eating a whole foods, plant-based diet and gave her guidelines, ideas and resources. We met twice per month for about 8 months in which we did consultations, cooking classes and the like. I also lent her my copy of the Fork Over Knives documentary and she and John watched it. She admitted it was eye opening. She was beginning to lose weight, gain more energy and, to her surprise, her skin and hair were glowing to the point that John took notice. She had been losing hair due to her stressful job and it was growing back. She followed my recommendations and began gradually eliminating animal products from her diet. Much to my delight, she began purchasing vegan cookbooks and began creating her own recipes. She would ask me for help making good choices when eating out and traveling. She was all in and loving it!

John was very supportive and would make grocery store runs for her and find vegan-friendly dining spots in Philadelphia. He was happy to see her putting herself first. The only issue is that he was personally not eating what she was preparing. He would try a few things and it was a win if he had a vegan dish as a side with his meat. He was also still heavily consuming junk foods and soda because he worked long hours and because he was simply addicted. As much as he supported Vera, he was not ready to join her and commit fully to her new found lifestyle.

In January 2016, I hosted a five-day New Year plant-based group cleanse via Facebook. The idea was to encourage people to try eating this way for just five days, at a time (during the season of new year resolutions) when people are more willing to change. I provided a grocery list, meal ideas and many of my personal recipes. Vera joined and John decided to try it too… finally. John has continued to eat plant-based and has lost 28 pounds between January 4th and March 27th. His taste buds have adjusted and now he is addicted to feeling energetic and ‘cleaner’ on the inside. In addition to the weight loss, he no longer snores and his chronic cough (that doctors couldn’t figure out) is gone! He even tried allergy testing to no avail. These improvements happened almost immediately after he switched to a plant-based diet.

When I first met Vera, I asked her what her weight loss goal was. She told me a small number as a start. She recently shared with me that her initial goal was 50 and she didn’t share that because it seemed unattainable. To date she has lost 55 pounds and is shooting for 60!

Vera has a huge heart and she has struggled with trying to help her coworkers eat healthier. She is the food service director at a Nursing home in New Jersey. The availability of healthy foods is almost nonexistent there and many of her coworkers do not have a car to travel to other stores with more of a selection. She does what she can to educate them and leads by example. When they have meetings with
Danishes, coffee and junk foods she proudly whips out a homemade snack or a Larabar.

In Vera’s words:
“Rather than being a challenge, switching from a conventional to a plant-based diet has been like a voyage of discovery for John and me. We have both found immense pleasure in learning new vegan recipes and finding new and healthier ways to cook some of the meals that had been staples in our diets. It has been difficult to find restaurants that offer a choice of plant-based entrees that aren’t just salads, but it has also been fun to discover new vegan restaurants that have now become a new part of our lifestyle.”

I hope this story helps to inspire others who are considering making this change. Vera and John are a real everyday happily married couple that tried something new and realized immense benefits far greater than what they imagined. They know that by changing their lifestyles they are also adding quality years to their lives and reducing or eliminating their chances of developing chronic degenerative diseases of affluence that are prevalent in the U.S.