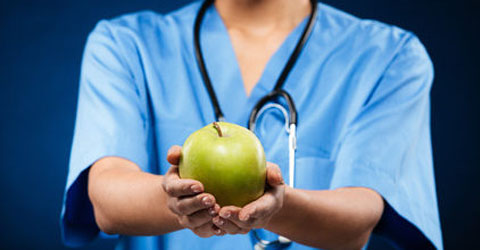 A Nurse’s Journey to a Plant-Based Lifestyle

CNS: What inspired you to adopt a whole food, plant-based lifestyle?

Kathleen Kirby: Well, I would say that probably the first thing was my age. At age 52, as I understand it, is the most common age that adults have heart attacks. And so here I was, I was suddenly like, “Oh my gosh, I thought I’d never come to it. I’m 52.” That’s the age my father had a heart attack and it became very real to me, this idea of mortality. My dad had a heart attack sometime in the early ’90s and afterwards someone gave him a book written by Dean Ornish, MD which talked about how you could reverse cardiovascular disease. He read the book cover to cover and he put the principles to practice. His cholesterol went way down, his LDLs went way down and he was able to get off all medication. He stayed that way for the rest of his life. I thought, “I’m going to start doing what Dad did.” So I began putting those principles that he learned into practice. In addition, someone told me about this book called The China Study, written by T. Colin Campbell, PhD. I read that book, watched Forks Over Knives and I just started doing research.

CNS: How lucky were you to have a dad who actually heard about Ornish! How do you feel since going whole food, plant-based?

KK: You know, I’ve always been somebody who’s taken care of myself, so I wasn’t going from somebody with very bad health to somebody in good health. But what are the real practical ways that this has manifested in my life? I would say in general I feel good, but I probably felt good before too. But I’ve been able to go all the way through menopause, come out the other side, and I never once had a hot flash, haven’t really had the symptoms that all my colleagues and friends talk about. I attribute this to my plant-based diet.

Also, since I was around 16, I have dealt with major depression and have had to be on medication for the majority of my adult life. I haven’t been able to come off the medication completely, but since being on the whole food, plant-based diet, I don’t dip into the depression like I used to, I’ve been able to scale back to about half of the medication I was taking. I also attribute that to this diet. I have asthma and I think my asthma has been in better check since being on this diet. Too bad I didn’t know about it when I was a kid, but that’s just how it goes. My friends and colleagues often talk about stiffness and arthritis and things like that starting to come on, and I don’t have any of that. And I don’t get sick very often. So I think that’s probably part of it.

CNS: What are some of the responses you get get when you speak with people about adopting a whole food, plant-based lifestyle?

KK: The responses are so predictable and I tend to hear the same ones. One is, “Oh, I just require more protein than that. In the morning I have to have some protein or I can get low blood sugar and I just feel light-headed.” The other one is, “I can’t give up ice cream or I can’t give up cheese, but I can give up meat.” Then people feel like they’re doing something positive because perhaps they are giving up meat, “But I can’t give up cheese. I just can’t do it.” I mean, I’ve had friends say things like, “You know, life is hard enough without having to give up my favorite foods. Why would I even want to live like that? I think I’m just going to accept my fate and when it’s my time to go, it’s my time to go.”

I’ve talked to people, I’ve told them about cravings and some of the information I’ve gotten from The Cheese Trap, by Neal Barnard, MD and some of the great resources out there that are teaching us what happens in the brain and why we respond a certain way to these calorie dense foods, especially those that contain dairy. It’s fascinating the things that I’ve been learning about. And that the cravings can go away. “I was a cheese addict too,” I tell them, “and I don’t even think about cheese anymore. I really don’t care about it at all.” I never would have believed that I would say that.

CNS: As a nurse, what advice would you share with someone who wants to become healthier and adopt this lifestyle?

KK: Well, first and foremost you have to educate yourself. You have to get the information and then once you get the information, you have to have a way to know if the changes that you’re making are actually working to help you achieve your goals. I don’t know any other way to do it but blood work. Obviously, you need a physician to order the blood work. For example, I’d been on a whole foods, plant-based diet for five years, but I needed a reality check, so I went and had my yearly blood work.

Well, I’d been fudging a little bit and selecting the creamer that has a little higher fat content and not in keeping with what I know from the research and my reading and I was buying prepared foods (even some from our local health food store) that I know are made with some oil. I was eating an occasional vegan ice cream, you know, a little treat here and there. Just having little cheaties here and there. Well, my blood work was not what I wanted at all. It put me in a moderate risk category, which of course according to my clinician was like, “Oh, you’re doing fine. You’re good, your blood work’s all good.” But even on the lab work it said moderate risk.

So I know from that, I don’t want to be at moderate risk, I don’t even want to be low risk, I want to be no risk. So I have certain parameters that I want to reach with my blood work, and I have reached before so boom, I came right back and began planning what I was going to do differently because it’s just really black and white to me. This is about my life and my health and I don’t want to be sick.