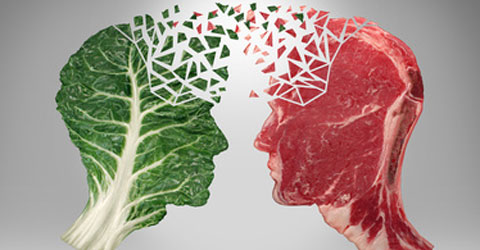 Nutrition is a Democratic Topic in This Life Changing Writing Class

At the crowded commuter college where I teach in Queens, New York, a “balanced meal” consists of whatever concessions students can balance with the load they already carry (not just a heavy book bag, but often parenting and full-time jobs). Our busy campus sits in an eclectic city landscape where elevated trains, skyscrapers, museums, and residences converge with restaurants, slaughterhouses, factories, and dairy bottlers. The area aims to offer an integrated whole–with some curious eccentricities. Industrial warehouses swiftly transform into trendy eateries. A century-old milk factory shutters its doors, rendering workers unemployed. Periodically, stockyard bovines escape into the borough’s busy streets. The incongruous image of the “cow in the metropolis” warranted a classroom discussion or two, and it got me thinking: if a cow can break free from the confines of an urban kill floor, I might similarly shatter the boundaries of my discipline to invite an unlikely guest–the subject of nutrition–into the composition classroom.

Both on and off campus, “food” in Queens can mean processed, mass-produced commodities or a variety of cultural cuisines traditionally featuring animal products. Ironically, it was living and working against such a backdrop that I became a devoted, whole food, plant-based eater. My eyes were first opened by The China Study and the flood of published studies and documentary films it inspired. As a writing professor, I marvelled at how powerful this research was, and I wondered how anyone could choose not to eat a whole food, plant-based diet in the face of such incontrovertible evidence. Not only did I stop eating junk after gaining a deep understanding what real food is, but nutrient-rich whole foods genuinely became more appealing; yes, once my body and mind were in sync, a plant-based diet truly tasted better. Perhaps the most significant appetite shift does not start in the dining hall, but in the library!

Since a key objective in college writing is learning how to defend a compelling thesis argument in response to a controversial discourse, I considered how the growing body of evidence comparing the Standard American Diet with a Plant-Based Diet might serve as a model resource for learning basic argumentative skills. At first, I felt uneasy about teaching literature associated with science, a subject customarily kept discrete from the humanities. However, the Plant-Based Nutrition Certificate supplemented my existing academic credentials and gave me the confidence and credibility I needed to forge ahead.

Now that I have integrated nutrition into multiple writing classes over several successful semesters, I can offer the following observations as fruits of this endeavor. This is what you can expect when composition and nutrition come together in the classroom:

By the end of the semester, writing about nutrition in the composition classroom doesn’t appear as awkward as a cow running down the city street. There are other signs of progress and community integration. One urban slaughterhouse escapee was rescued and retired to a New Jersey farm sanctuary. The defunct dairy bottler successfully reemerged under a plant-based nut milk label. Across the street from our campus, a converted warehouse features an enormous glass-enclosed kitchen that prepares food for over 60 locations of a popular plant-based restaurant chain.

Queens, often dubbed “the world’s borough,” is changing. Students around the globe are seizing new opportunities through educational outreach organizations devoted to plant-based wellness and wellbeing. They are planting rooftop gardens, veganizing cafeterias, using interactive virtual technologies to experience slaughterhouse reality, and organizing screenings of films that promote health for our entire planet.

While inspiring students to reflect, research, and write about processed food, animal-based products vs. whole food, plant-based nutrition, I’m not teaching dietetics, but argumentation. I don’t set out to change students’ diets or to change students into dieticians, but to make them better at informing and defending their own convictions. Studying nutrition across or in between disciplines can bring vital awareness and improved health to all of the communities in which we learn and live. It can link a class, or a whole campus, together through interdisciplinary initiatives. It holds enormous potential for dynamic societal interaction. With nutrition across the curriculum, we gain mathematicians who know how to crunch nutrition facts, psychologists who analyze addictive eating habits, healthcare workers who employ nutritional (not just procedural and pharmaceutical) solutions, business people who mindfully examine ethics of food production and marketing, and so on. We might not all aim to become nutritionists, but we are fundamentally nutrition seekers, and this relates to every major and every profession out there. This may very well be the most powerful way that individuals can connect and cooperate to nourish any community as an integrated whole.