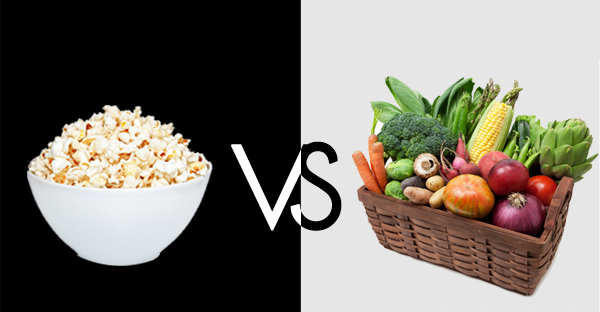 Popcorn Is Healthier than Vegetables?

Tracing the Origins of Health Messages in the Media

With all of the mounting excitement over nutrition and its possibilities in the media, the volume of health messages are increasing and many people are drowning in a sea of confusing and sometimes contradictory information. How do you know what to believe? How can you sift through the claims to arrive at the facts?

The foundational principle to follow is to always seek the source of the information, and to carefully analyze what that source is saying and how it differs from popular press version. Journalists, bloggers, and reporters often unintentionally distort or exaggerate information in the name of writing a good story, as we’ll see in the following example. It takes some patience and persistence to stay one step ahead!

The three articles below report on research on popcorn that was originally presented at an American Chemical Society conference. By the time it got to you, you might read something like this:

Scientific Proof That Popcorn Is Healthier Than Fruit and Vegetables
“Next time you’re stuffing your face with popcorn, don’t feel guilty; a new scientific study shows that, far from being junk food, popcorn packs a better nutritional punch than fruit or vegetables…”

Okay, let’s set aside for the moment that singling out any one particular food or nutrient represents a misunderstanding of how nutrition really works. What is the article talking about? Should we all throw out our broccoli in favor of Pop-Secret?

You can probably imagine hearing buttery-popcorn lovers telling each other “Popcorn is healthier than vegetables! I’m so happy…I’ve never liked salad.” while cooking oily bags of popcorn into the microwave.

This first article is a Gizmodo blog post that could be considered a tertiary source of information (two degrees removed from the original source). When you read this blog post, look for the hyperlinks marking where the information came from!

Gizmodo got their information from ScienceDaily, which shared a reprinting from the American Chemical Society via Newswise, their online news feed/newspaper. The information at this stage looked like this:

Popcorn: The Snack With Even Higher Antioxidants Levels Than Fruits and Vegetables
ScienceDaily (Mar. 25, 2012) — “Popcorn’s reputation as a snack food that’s actually good for health popped up a few notches as scientists recently reported that it contains more of the healthful antioxidant substances called “polyphenols” than fruits and vegetables…”

Now we see that we’re not comparing one whole food to another, we are talking about measuring levels of polyphenols, one very specific kind of antioxidant among many. This article has a bit more of a measured tone, and quotes the researcher in cautioning people against overstating the case.

But the eye-catching title and other supporting details can still be quite misleading for people who may only have a minute or two to read the headline on their phone.

Abstract
Popcorn, one of the most popular snacks foods in the world, is known for being a high fiber, healthy food. Research has found that popcorn contains significant amounts of the class of antioxidants known as polyphenols. Being a popular snack food, polyphenols from popcorn are possibly part of a large portion of the polyphenol dietary intake. Popcorn without any oils is also a 100% whole grain food, whose consumption is recommended in the Dietary Guidelines for Americans. Free and total polyphenols for 40 different kernels and ingredients have been quantified using the Folin-Ciocalteu and FRAP assays. The identity of the polyphenols have been identified using UV/Vis HPLC and LC-MS. Ferulic Acid has been identified as one of the major components. By quantifying and identifying the polyphenols in popcorn; some predictions about their bioactivity can be made.

Notice how this abstract focuses on a single (which frequently means reductionist) outcome of interest – the levels of polyphenols, and notes that because they are concentrated in popcorn, they may account for a large portion of total polyphenol intake. The popular articles took this information and turned it into a comparison of different foods, in which popcorn came out on top of fruits and vegetables. So much was lost in translation that the final product doesn’t even look like the same message.

These kinds of misinterpretations and exaggerations are appear almost constantly in the media – at best they can serve as flags to look more deeply into where the information came from and what the original source is really saying. Sometimes you may find something interesting, but be careful not to take these messages at face value. They contribute to a lot of the confusion circulating!