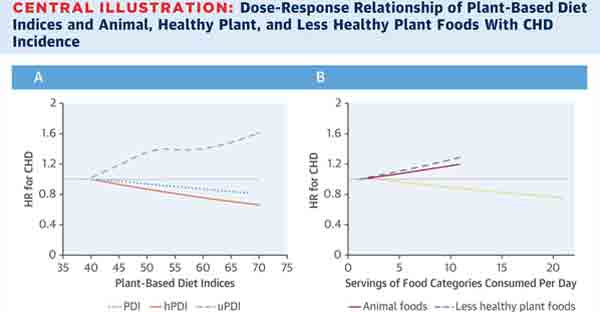 When it comes to heart disease risk, the quality of a plant-based diet matters, according to new research published in the Journal of the American College of Cardiology.

Plant-based diets have been tied to a lower risk of coronary heart disease, however, most of the previous studies looking at the benefits of a plant-based diet used the term “vegetarian” describing several dietary patterns that exclude all or some animal products. Likewise, previous studies typically treated all plant foods equally including refined grains and sugar-sweetened beverages.

Ambika Satija, ScD from the Department of Nutrition at the Harvard T.H. Chan School of Public Health in Boston and colleagues sought to better understand the association between different degrees of plant-based diet quality on coronary heart disease incidence.

The study population included participants from the Nurses’ Health Study (NHS), the Nurses’ Health Study 2, and the Health Professional Follow-up study (HPFS). These studies excluded participants with baseline coronary heart disease, stroke, and non-melanoma skin cancers. The plant-based diet indices were then applied to data obtained from diet frequency questionnaires the participants completed every 2 to 4 years. For this current study, data was analyzed on 73,710 women in the NSH, 92,329 women from the NSH2, and 43,259 men from the HPFS.

The authors offered several possible mechanisms for the association between a more healthful plant-based diet and reduced heart disease. The more healthful plant-based diets include higher intake of fiber, antioxidants, and micronutrients and lower intake of saturated fat and heme iron. Therefore, may lead to weight loss, better blood sugar and insulin levels, reduced blood pressure and lipids, improvements in vascular health, lower inflammation, and improvements in the diet-gut microbiome leading to lower trimethylamine N-oxide (TMAO), according to the paper.[1]

“When we examined the associations of the three food categories with heart disease risk, we found that healthy plant foods were associated with lower risk, whereas less healthy plant foods and animal foods were associated with higher risk. It’s apparent that there is a wide variation in the nutritional quality of plant foods, making it crucial to take into consideration the quality of foods in a plant-based diet,” Satija said in a press statement.[2]

In an accompanying editorial, Kim Allan Williams Sr., MD of the Division of Cardiology at Rush University Medical Center in Chicago highlights that this study may lead to a “risk-based” approached to prescribing plant-based diets. For instance, patients with a history of cardiac events or those with a high risk for cardiovascular disease would have a stronger recommendation for the more strict plant-based diet (hPDI).

Further, Dr. Williams addresses the “all-or-none” mindset that may lead to patients feeling that reaching dietary or exercise goals are unattainable. He notes, “Just as physical activity is a continuum, perhaps an emphasis on starting with smaller dietary tweaks rather than major changes would be more encouraging and sustainable for those finding it difficult to make a complete and precipitous change in dietary habits.” A simple approach was recently coined by Michael Pollan, Eat food. Not too much. Mostly plants.[3]

Limitations of the study included its observational nature and possible measurement errors in dietary assessments.

The study was supported by grants from the National Institutes of Health. Investigator disclosures included Dr. Chiuve’s employment by AbbVie, Dr. Rimm received grants from the DOA and Blueberry Highbush Counsel, and Dr. Hu received support from the California Walnut Commission and Metagenics.