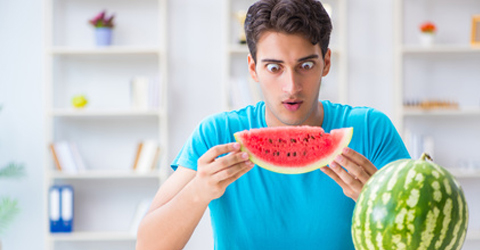 We all know that fruit contains valuable nutrients (e.g. vitamin C), but most of the calories in fruit come from carbohydrates—specifically sugar. While most fruit contains a mixture of different sugars, a major sugar in fruit is fructose. You may have heard of fructose in soda and other processed foods(e.g. high fructose corn syrup), which can be detrimental to human health. So for those interested in health, should we eat fruit, be cautious, or avoid it?

The simple answer is eat fruit!

Although fructose is naturally found in fruits, it can also be created artificially to be used as a sweetener in processed foods like soda, candy etc. The sugar in processed foods is harmful, while eating sugar in the form of whole fruits is beneficial. For example, research has reported that artificially made fructose is associated with liver and blood pressure problems while fruit is not[1] and may even be beneficial.

The reasons for this are complicated, but fruits can be thought of as one of the most nutrient dense foods on the planet. Most are naturally low in overall calories while containing many micronutrients, including vitamins, minerals, and a variety of phytochemicals such as beta carotene, polyphenols, and other antioxidants. This is the exact opposite of fructose containing processed foods!

Can fruit cause type 2 diabetes?

There has been concern about the sugar content of fruit with regards to those with diabetes or at high risk for developing diabetes, and many healthcare professionals recommend limiting fruit consumption for those individuals. However, increased fruit consumption has been associated with lower diabetes risk.[2][3] Further, a 2011 study specifically among diabetics compared medical nutrition therapy with a restriction of the amount of fruit eaten to a group who had to eat at least two pieces of fruit daily. The group limiting fruit consumption had no benefit compared to those eating lots of fruit! Considering the many benefits of fruit consumption, the authors wrote that “the intake of fruit should not be restricted in patients with type 2 diabetes.”[4] A more recent study even reported that higher fresh fruit consumption was associated lower risk of diabetic complications and death among those who already had diabetes.[3] Those with blood sugar issues should follow individualised advice from their healthcare professional, but consuming fruit with other foods—for example, chopped banana on oatmeal—can help keep blood sugar more stable in those experiencing difficulty.

Can fruit cause weight problems?

Some are afraid that because fruits contain sugar that they contribute to weight problems. One study from researchers at Harvard reported that 0.22 portions of fruit daily (e.g. one fifth of an apple) was associated with a reduced risk of obesity by up to 14%.[5] A separate study from five European countries reported that a 100g increase in whole fruit intake per day was associated with a small loss of weight.[6] In a 2011 study, researchers asked one group of volunteers to decrease consumption of all sugars, including fruits while another group were asked to decrease added sugars only. The group who ate less fruit and sugar lost weight (6.5lbs) but the group consuming fruit but less added sugar lost even more weight (9lbs).[7] In fact, a major review article published in 2016 in the journal Nutrients summarised existing scientific evidence which consistently reports that fruit is associated with less obesity and even with weight loss.[8]

There are several proposed mechanisms by which fruit seems to help control weight, including high nutrient content but perhaps more importantly modulating the gut microbiome and providing prolonged satiety (feeling fuller for longer) leading to decreased overall calorie intake.[8] A fascinating 2009 trial from Pennsylvania State University compared the effect of apple, apple sauce, apple juice or apple juice with added fiber on energy energy intake. The whole apple led to increased fullness and decreased energy intake, even compared to apple juice + fiber.[9] This trial agrees with Professor Campbell’s stance of wholism versus reductionism. In other words the benefits of a piece of fruit can not be replicated by isolating individual components e.g. vitamins, minerals, fiber.

What are the benefits?

There is also consistent evidence that eating fruit is associated with lower risk of multiple cancers and cardiovascular diseases, including stroke.[10] Increasing fruit consumption has even been associated with decreased risk of dying from Alzheimer’s disease[11] and COPD.[12]

As long ago as 1985, it was suggested that fruit and vegetables may protect against early death.[13] Multiple subsequent studies also observed decreased risk of early death with higher fruit consumption. Indeed a 2017 review of 95 studies published in the International Journal of Epidemiology noted that increased fruit consumption was associated with less cardiovascular disease, including stroke, less cancer and less premature death.[10] Some studies reported that those eating the most fruit compared to the least fruit had a 40-50% decreased risk of premature death.[14][15] Another study reported that compared to those who didn’t eat fruit, consuming a single portion of fruit each day was associated with a 19 month longer life.[16] Imagine what five portions of fruit daily might do!

Low fruit consumption is considered to be the fourth leading contributor to the global disease burden[17] and it has even been estimated that 7.8 million premature deaths worldwide may be caused to a low fruit and vegetable intake.[10]

What type of fruit?

It should come as no surprise that fresh fruits are consistently regarded as the best type of fruit. Frozen fruit is a close second and can make a cheaper, convenient source, especially when certain fruit is not in season. Dried fruits generally contain similar nutrients as fresh or frozen but are more concentrated. However, the sugar content will also be more concentrated.

Juice made from fruit, even freshly squeezed fruit, will have most of the fiber and lots of nutrients stripped away. There is consistent evidence that fruit juice consumption increases the risk of weight gain, particularly in children.[8] Fruit juice consumption has been associated with a higher risk of type 2 diabetes.[2] One interesting study compared whole apple, clear apple juice, and cloudy apple juice. The whole apple would be the highest in fiber while the clear juice would contain virtually no fiber. The people who ate whole apples had a drop in total and LDL cholesterol, while the people who consumed the clear apple juice actually had an increase in cholesterol. Those who consumed cloudy apple juice had a drop in cholesterol but not as much as the whole apple group. This suggests that fiber is very important for the health benefits of fruit.[18] Additionally, caution is required with canned or tinned fruit, which often contains added sugar or syrup. One study even reported that tinned fruit was associated with increased risk of death.[19] Therefore, try to stick to fresh or frozen fruit. Occasional dried fruit is fine for most too. Increase your consumption of fresh fruit by snacking on various fruits, preparing fruit based desserts, and blending fruits to make tasty smoothies!

So there you have it: eating more fruit helps decrease risk of obesity, disease, and death. Perhaps an apple a day does keep the doctor away… if accompanied by other whole plant foods!

Regenerative Grazing: Not As Sustainable As We Think