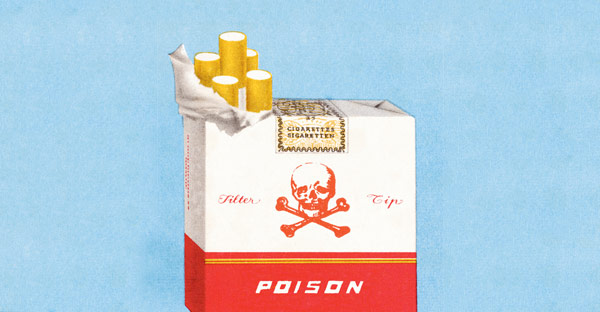 Have you heard, for example, any serious discussion about the relative health hazards of using tobacco versus the problems brought on by poor eating habits? Each domain tends to be discussed separately as if it were entirely independent of the other. But let’s look at the connections; I’ll bet I can get you to think about some things you’ve not previously considered.

Considerable evidence supports this idea. For example, if we examine lung cancer rates among heavy smokers who consume varying amounts of vegetables, we find that the higher the intake of vegetables, the lower the lung cancer rates. At least 10 human studies have shown this. Indeed, in one of the largest studies, done on male employees at Western Electric, the effect of diet was quite remarkable. Lung cancer rates for those who ate the most vegetables were almost as low as they were for those who did not smoke at all.

Obviously, nutrition exerts a very powerful influence on cancer occurrence. Perhaps you read about the two recent studies, funded by the National Cancer Institute, which showed no effect on forestalling lung cancer by taking beta-carotene supplements. What was barely mentioned by the press, however, was that the National Cancer Institute also reported that the “participants with the highest levels of beta carotene in their blood measured before the study began, went on to have fewer lung cancers.” What this demonstrates is that beta-carotene-rich diets, rather than synthetic forms of beta carotene given as supplements may, in fact, have a cancer-protective effect. On the other hand, smokers who take beta-carotene supplements experience, if anything, higher rates of lung cancer. In other words, we should not take observations out of context; it’s like taking single nutrients out of foods. We must again remember relationships.

Some of this may seem to suggest something that I really do not like at all, that is, that using cigarettes may not be so bad if we just eat our vegetables. Even though cigarette companies might like this idea, I say, “Balderdash!” This idea -preventing smoking-related lung cancer by consuming more vegetables- seems on the surface to be quite promising. Here we must cast our net more widely to consider other issues, again looking for relationships. We must look at those studies showing that smoking kills more people through heart disease than through lung cancer; that smoking can cause extremely debilitating respiratory problems (including emphysema); and that smoking is responsible for many cancers other than simply lung cancer. In addition, evidence shows that the nutritional factors preventing lung cancer in these high-risk men also are virtually the same as those that prevent other types of cancers, as well as other chronic degenerative diseases. This is an observation of great importance. It means that doing one sort of thing, in this case consuming foods of plant origin, casts a wide net to prevent many possible diseases. But remember, diet is not a cure-all; if you smoke, you are going to have to face the consequences.

When we explore this idea we find that it is true that the relationship between tobacco and lung cancer and heart disease is more obvious and straightforward than the relationship between diet and disease. There is good reason for this. Diet and disease relationships are infinitely more complicated because of (a) the enormous number of possible factors in foods that affect disease and (b) the large number of diseases involved. Luckily, this information overload boils down to something that is really quite simple when we search for solutions. By eating a plant-based diet you can live a longer, healthier life.

And finally, when it comes down to how things work in the larger view, we probably know more about the way that diet works than the way tobacco works. Frankly, I believe it is rather foolish to debate which health hazard is more important – using tobacco or consuming the wrong kind of food. Both contribute enormous health problems.

The truly important underlying question concerns the magnitude of the problem associated with each practice. Now we discover something really staggering. Consider it this way. If we hear of a natural disaster that kills a few hundred people, we obviously react to the gravity of the event. But what if we knew of a monumental disaster killing tens of thousands of people, as has been seen in a few major earthquakes? Or worse, a war killing a million or more people? What if- and this is a really big number- we talked about 200 million people being killed? This, you might be surprised to learn, is a reasonable estimate of the number of people now living in the world who will die prematurely due to tobacco use. It is hard to come up with a very precise number, because in some countries tobacco use is going down (such as in the U.S. for adults but not young people), and in others it is on a rapid rise. But rest assured, this number, if anything, is conservative. I urge you to think about this number again: 200 million people. This approaches the entire population of the U.S. It makes wars pale by comparison. Tobacco companies, ya’ hear?

Even more staggering to consider is just how many premature deaths could be avoided if people would both stop smoking and, at the same time, start eating a plant-based diet.

How to Make a Difference

Want to help get the ball rolling? A good start is to make the change yourself. Then, through your own example and encouragement, you can help others to lead similarly healthy lives. And if you want to do more, you can make contact with two organizations that are doing particularly effective work in this area. One is Action on Smoking and Health (ASH); it just may be the most effective health-promoting agency – of any kind – in the entire country. The other is the American Institute for Cancer Research, which focuses all of its resources, obtained from everyday citizens like you and me, on the dietary causes of cancer. If you wish to share your resources or time, give these folks a hand. They deserve it.

Wishing you the best of health in a smoke-free world!