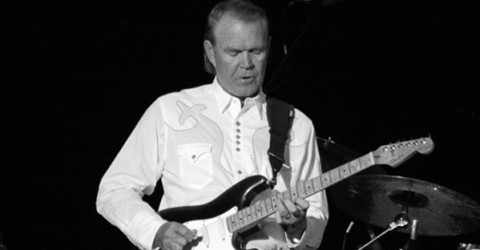 I was struck when I watched the CNN-TV show I’ll Be Me, the tragic story of Glen Campbell and his development of Alzheimer’s disease. Like so many others, I have been a long-time fan of his music. He has been a pioneer in bringing this genre of music to the larger society.

My personal respect for this man comes from my younger, wilder days. A few of us young guys would go stag to the nearby bars in the foothills of Virginia, West Virginia, and Maryland to listen to the ‘hillbilly’ music that was then popular with people living deeper in the hills. We went stag because it was not the right place to bring dates of the opposite sex (or so their parents thought!) and going there affirmed, in part, my own roots. Yes, in our area, that music was called “hillbilly,” only later being named ‘bluegrass’ or ‘country music’ when city folk noticed this treasure. Along with Patsy Cline who started out in those same bars that we frequented, Glen Campbell, from a deeper place in the South, began revealing a really important piece of Americana.

So, let’s fast forward a few decades when I had become engaged in the world of biomedical research, especially learning how powerful, but mostly ignored, is the evidence showing that nutrition is able to control a broad swath of our health and healing. I speak, of course, of the only dietary lifestyle—centered on whole plant-based (WFPB) foods—that actually has been shown to reverse or remediate the progression of serious diseases like heart disease, diabetes and many other ailments (I am confident that cancer will be next on this list). The breadth and depth of this dietary effect is breath-taking (Campbell and Campbell 2012), unlike treatments that depend on pills and procedures.

And now, a relatively large amount of evidence is showing that this same dietary lifestyle is likely to profoundly slow down (stop?) the progression of Alzheimer’s disease as well. In 2005, we summarized some of that information in The China Study. (Campbell and Campbell 2005) Now, years later, two Turkish medical biochemists (Sezgin and Dincer 2014) recently reviewed the underlying mechanisms for this dietary effect, citing a very large and rapidly growing body of evidence from many research groups. It is, in my opinion, a brilliant summary that focuses on the basic biochemistry of disease formation. I especially like the way they refer to the important role of nutrition in this disease, calling it “epigenetic,” meaning that it controls the expression of genes thought to be involved in disease formation. Most importantly, the dietary effect on Alzheimer’s rests on a profound biochemical basis. And further, the fact that it is the same dietary lifestyle that so effectively represses even reverses other chronic diseases makes the evidence even more compelling.

Now, back to the TV show on Glen Campbell. The courage of Glen Campbell and his family to allow the public to see the impact of this disease on family matters is deeply touching and brave. They deserve credit for increasing public awareness of this unusually difficult disease. The “proud” sponsor of this show is the huge pharmaceutical company, Eli Lilly, and to be generous, I should say that they also deserve credit. However, I won’t.

Throughout this show, the viewer is encouraged to believe that the only solution for this disease is to support the development of yet another drug. And for this, we need money. In the CNN article titled Alzheimer’s is a young(er) person’s disease — so get to work, Dr. Sanjay Gupta suggests that government funding needs to be increased nearly four-fold (from its present level of $580 million), in order to keep pace with funding for cancer at $5 billion, AIDs at $3 billion and cardiovascular disease at almost $2 billion, especially given the estimation “that Alzheimer’s will consume almost 25% of Medicare’s budget” by 2040. Or, if you prefer, make your donation to the Alzheimer’s Foundation. But more to the point, this competition for funding sounds a bit like the arms race! But what good is any of this research if it ignores what is likely to be its most important factor controlling (preventing even reversing) this disease?

Although the Mediterranean diet is mentioned in Dr. Gupta’s article, not a single word is said about the possibility—even likelihood in my opinion—that the nutritional effect of the WFPB diet is likely to trump the hoped-for benefits of any future drug that might be envisioned. The gravity of this oversight—I mean bias—cannot be overemphasized. Here is a rapidly emerging, personally tragic epidemic now being predicted and we are being told that there is only one way to solve this problem—one based on developing another drug. Anyone who truly understands the infinitely complex biology of the body cannot help but also know that this future strategy is folly, indeed immoral. Even if a drug were developed to show an apparent benefit, it will be minimal, will be short lasting, will create unintended consequences, and will cost huge amounts of money that ends up in someone else’s pocket—mark my word. I don’t claim that we already have enough information to adopt a nutrition strategy to control the causation and possible treatment of Alzheimer’s disease. But I do claim that when the relative amounts and quality of the ‘preliminary evidence’ for the nutrition and drug strategies are compared for the purpose of charting future strategies, there is no contest. This choice indeed becomes not only a scientific judgment but a moral judgment.

Now, back to Glen Campbell and his family. What struck me as I watched that program was not only how much I enjoyed the music that took me back to my roots—and this country music icon—but also it reminded me of how manipulative this film was at keeping us in the dark. We remain uninformed not only on the role of nutrition in Alzheimer’s disease but also its role in so many other serious ailments and diseases—all growing from the same nutrition fundamentals.

I cannot help but think of a dark cloud of misinformation hanging ominously over those communities of my youth as well those of Glen Campbell’s. How many people really know how devastating the impact of this misinformation? Why is it so easy to promote the development of yet another round of drugs? How long will it to take for us to change this narrative?