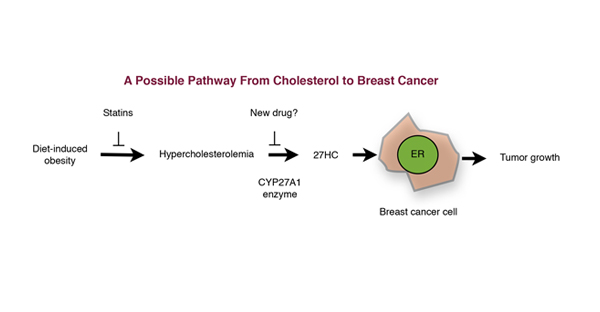 According to a journalist for the prestigious journal Science (November 29, 2013), “Cholesterol….when metabolized by the body…turns into a potent estrogen-like molecule that spurs the growth of breast cancer in mice, and perhaps in people. That’s the conclusion of…studies that shed new light on the link between obesity and cancer.” And this journalist goes on to quote a highly qualified scientist in Boston who says, “No one had thought of it before. It raises a new potential strategy.”

The writer refers to the findings of two research groups, one at Duke University School of Medicine 1, the other at the University of Texas Southwestern Medical Center in Dallas 2.

I could not have hoped for a better illustration on how medical research goes so far astray! It beautifully illustrates the main theme in my new book, Whole (2013).

The pathway summarizing this new finding is shown in the chart (re-drawn as in Science). Mainly, it shows how high serum cholesterol (hypercholesterolemia) connects to breast cancer. Cholesterol is metabolized by an enzyme in the breast tissue, CYP27A1, to produce 27HC (27-dehydrocholesterol) which has estrogen-like activity and which enhances breast cancer growth in a Petri dish in the laboratory. They also found that elevated CYP27A1 enzyme activities in human breast cancer were associated with tumors that are more aggressive.

In short, high serum cholesterol levels, high CYP27A1 enzyme levels and more of the estrogen-like 27HC makes breast tumors more aggressive–something “no one had thought of before.” This is not quite true because it omits or sidelines highly related evidence that substantially changes their conclusion.

Our findings in rural China showed, more than 20 years ago, that high serum cholesterol levels were highly significantly associated with cancers as a group (including breast cancer) 3 and, further, that breast cancer was associated with circulating estrogen activity 45. About 20-25 years before that, we were extensively researching the multi- variant, carcinogen-activating CYP27A1 enzyme (then known as the mixed function oxidase 6 and were showing that it was highly responsive to increases in the consumption of casein (protein) 7 and other nutritional factors 8.

High protein consumption quickly and substantially increased enzyme levels, and resulted in more cancer (published extensively in peer-reviewed papers from my group). In addition, some of my colleagues were showing high protein consumption, high estrogen levels and high breast cancer development in animal studies 9, 10. These studies, collectively, resulted in dozens if not hundreds of peer-reviewed research papers showing a prominent effect of animal-based protein feeding on this enzyme activity, on increasing serum cholesterol, on increasing circulating estrogen, on an impressive association with breast cancer occurrence as well as on various other dietary and metabolic events associated with breast cancer.

It was on this basis, that I, and several others, have known of the dietary-breast cancer linkage. A rough scheme of this linkage was presented in our book, The China Study (pp. 159-161). Our research especially supported the idea that increased consumption of animal based protein kicked this whole series of events into high gear, helping to explain how breast cancer is a diet driven (a high animal food-based diet) disease.

Although the summary scheme shown above acknowledges a detached dietary connection to breast cancer (but superficially revealing it as “diet-related obesity”– obesity is not a cause, it is an outcome!), they ignore it and point how it should be possible to develop a drug to block the CYP27A1 enzyme.

In this scenario, they focus on blocking a single enzyme activity embedded within a very complex network of metabolic events and enzyme-catalyzed reactions, a process that, if pursued, invites ‘unintended’ side effects. This allows people to continue using a diet which elevates serum cholesterol, elevates this enzyme activity, elevates the production of 27HC and elevates tumor growth—among countless other health impacts. But why not simply encourage people to change their diet and allow nature to control these events far more efficaciously, safely and cheaply—thus producing the desired effect without all the side effects?

This is an example of how medical research routinely works, focusing on one event at a time, buried within an immensely complex system. Developing single potentially dangerous, tissue-targeted drugs to block single pathways routinely sets aside control of the real culprit, diet. This strategy is so feeble, so ill-advised and so focused on creating wealth for the few over health for the many! Shameful!

I have one final question. Why has research on the relationship of diet with human wellness, especially a diet rich in whole plant-based foods 11 been so neglected and ignored and even, at times, so reviled? I have seen many forms of this rejection for many years now, much of it first hand, and have learned that such reactions have existed for decades, even centuries before our time.