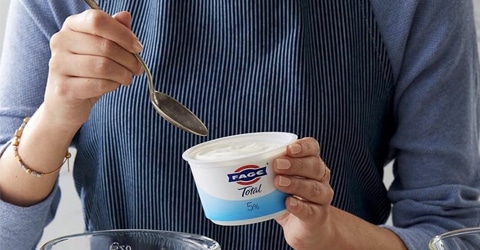 In an article titled, “Could Eating Yogurt Reduce Inflammation,”[1] Medical News Today covered a study[2] funded by the National Dairy Council that found dairy yogurt to reduce inflammatory markers. Judging by the funders alone, we had to take a deeper look to assess the validity of this research.

For this randomized controlled study, 128 premenopausal women of “good health” were divided into four subgroups: Yogurt Obese, Yogurt Non-Obese, Control Obese, and Control. Note: half of these women were medically considered obese. Half of the obese and non-obese women were instructed to consume 12 ounces of low-fat dairy yogurt for nine weeks, while the other half consumed the same amount of a non-dairy pudding. At three, six, and nine weeks, blood pressure, weight, and inflammatory markers were recorded.

While researchers saw four of the twelve biomarkers improve within the yogurt-consuming participants, LPS (lipopolysaccharides, which are responsible for chronic inflammation) found circulating in the blood did not decrease nor did the targeted biomarker, sCD14. The obese women who consumed yogurt saw a decrease in their diastolic blood pressure by two points, but all participants gained weight during this study—specifically, the obese women in both the yogurt and pudding groups gained an average of 0.9 kg.

The first fault we found in this study is with the “control” food. A soy-based pudding is not an accurate alternative to dairy-based yogurt. While both are high in sugar, the pudding does not have any probiotic properties, whereas most plant-based yogurts made today are fermented and do contain probiotic strains. You simply can’t compare yogurt to pudding and expect a valid result; it’s like comparing fruit to fruit-flavored snacks—one has the obvious (and unfair) advantage.

This study is further compromised by the lax restrictions on the participants’ diets. The women were asked to “limit” their intake of dairy, fermented foods, and probiotic foods to four or less servings per day. This is hardly a restriction, as three servings of sauerkraut or kombucha (both fermented foods) pack quite the probiotic punch.

Other questionable study methods fall within the data collection practices. Researchers collected the lids of the yogurt and pudding containers from each participant as proof of compliance; however, this is hardly a reliable unit of measure. A peeled-off lid is not proof of consumption. Participants could have easily torn off the lid and discarded the yogurt or pudding or not finished the full serving. Further, researchers used an Omron automatic cuff to record the participant’s blood pressure even though this device is not considered the gold standard of equipment. This could have led to inaccurate readings and false results.

Overall, this study did not prove that dairy yogurt is anti-inflammatory, although that is what the medical media decided to infer and promote due to the hot topic of inflammation. The study did, however, find a potential link between our microbiome’s reaction to consumed bacteria and inflammation. While more research is necessary, there may be a connection between fermented foods and lowering inflammation. Of course, dairy yogurt is not the only fermented food. As mentioned above, non-dairy yogurt, sauerkraut, pickles, kombucha, miso, and other plant-based foods contain gut-friendly bacteria that do not present the side effects of dairy or dairy foods.

This coverage offered by Medical News Today serves as a reminder that it is crucial to look beyond the headlines. While many of us trust the media to disseminate and explain complicated research, we must trust ourselves to interpret this summarized information and make the ultimate decision. Look at the study’s funding and weigh the benefits versus the costs. The detrimental long and short term side effects of dairy—from bloating and stomach pain to an increased risk of hormonal cancers—isn’t worth the supposed benefit of slightly decreased inflammation. We can effectively decrease inflammation by eating plants, anyways.