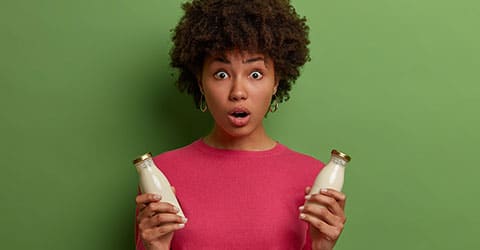 A large observational cohort study[1] in Sweden found that women consuming more than 3 glasses of milk a day had almost twice the mortality over 20 years compared to those women consuming less than one glass a day. In addition, the high milk-drinkers did not have improved bone health. In fact, they had more fractures, particularly hip fractures.

Interestingly, the study also found that fermented milk products (cheese and yogurt) significantly decreased mortality and fractures among these women. For each serving of these fermented dairy products, the rate of mortality and hip fractures was reduced by 10-15%. The researchers pin the negative effects of liquid milk on D-galactose, a breakdown product of lactose that has been shown to be pro-inflammatory. Milk has much more D-galactose than does cheese or yogurt.

I am surprised that this study garnered so much mass media attention upon its release, as it highlights the deleterious side of milk, but I also think it is important to keep the findings in context. And when it comes to the health effects of dairy, the context is not so pretty:

So despite being very pleased that the public is glimpsing some of the evidence against milk in this recent study (though they also could be hearing about the benefits of cheese and yogurt from this same study), I think there is a far more powerful story; a story that takes into account the largely hidden context of diet and dairy research. There is a wealth of indirect evidence of very serious possible harms of consuming dairy foods, and, on the flip side, the evidence that milk prevents fractures is scant.

As we look beyond the headlines, it is hard to think that we should continue to consume the lactation fluid that exists in nature to nourish and rapidly grow calves.

Can Water Fasting Regulate Blood Pressure? It Worked for Me!

Is Stevia the Safest Sweetener?