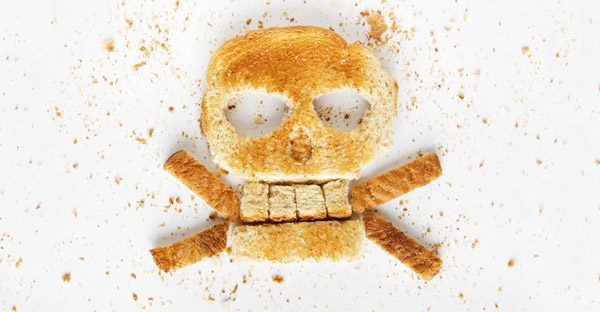 The following is an excerpt from The Campbell Plan by Thomas Campbell, MD.

It is easy to have concerns and questions about the possible dangers of wheat. It seems like a common concern everywhere I look. The popular media are exploding with fear that wheat is the culprit behind many common ailments. From reading some of the books on the bestseller lists, one would think that if we all just went gluten free, we would be slim, healthy, and without disease, like some sort of Paleolithic tribespeople running through the prairies.

I’ll explain why I have some very serious concerns about wheat, but I think the blame it’s currently taking is excessive. We have gone too far in the battle against wheat, to the point where many are ascribing all of our ills, from diabetes to brain disease to obesity to general malaise, to the consumption of this grass. Too many people are blaming wheat for all their joint aches, fatigue, and abdominal discomfort on the advice of books that then, amazingly, recommend eating unlimited amounts of oils, cheeses, and other animal foods. In other words, it lets them put the blame for how they feel on wheat and continue to feel good about all of their other bad habits.

Seven ounces of average intake covers all grains, including both rice and wheat, but Americans consume far more wheat than any other grain, so it’s safe to assume that most of the 7 ounces of intake is wheat. And we eat a lot of it. In fact, there are only two food groups that more than 50 percent of Americans get enough of, according to USDA recommendations: grains and protein foods (the protein coming primarily from meat).[2]

Maybe it is true. Maybe we are as addicted to grains as we are to meat. But it isn’t that simple. If we look at whole grains, for example, we get a totally different story. We do a miserable job of eating whole grains in this country. Ninety-nine percent of the population eats less than the daily recommended amount of whole grains, which is about 3 ounces, on average.[2] In fact, of all the grains we eat every day, less than 10 percent come in the form of whole grains. So if we eat the equivalent of about 7 slices of bread a day, only about half a slice would be whole grain and the rest would be bread made with white flour.[3]

So, the truth is that we are addicted to refined grains that are packaged in highly processed “food mixtures” that contain various oils, processed syrups, and other sugars. What foods am I talking about? The table on the opposite page shows what refined-grain foods we eat and how much of our total refined-grain intake they make up.[4]

When popular books or diet programs talk about people being addicted to wheat, realize that the top three forms of our “addiction” are white bread, cookies and cakes (and other “grain-based desserts”), and pizza. In fact, the vast majority of the wheat we eat in this country comes as a vehicle in multi-ingredient, highly processed food packages formulated to deliver fat, salt, sugar, meat, and/or dairy. One bestselling book[5] lambasting wheat as the cause of so many of our problems characterized America as a “whole grain world.”

Nothing could be further from the truth. We are a meat, cheese, and ultra-processed-food world.

When you hear anecdotes about people feeling better after eliminating wheat from their diet, realize that if they started out like the average American, they are eliminating pizza (with all of its dairy, fat, and salt), bread (the vast majority of which is highly refined white bread), cookies and cakes and other high-fat, high-sugar desserts, and pasta (most of which we eat with lots of added fat, cheese, and salt). When you cut these calorie-dense processed foods out of your diet, do you think you might lose weight and feel better? Of course! Is it because you are avoiding wheat or is it because you are avoiding the other components of these ultra-high-calorie processed foods? I’m not sure.

I do not mean to make wheat seem totally blameless. For some people, the adverse effects of wheat consumption are very real.

There are three broad categories of bad reactions that might occur from eating wheat. They are allergic reactions, autoimmune reactions, and “other” (neither autoimmune nor allergic).[6] Most people are concerned that they have gluten intolerance without celiac disease. In other words, they believe that gluten makes them feel worse even though they do not have celiac disease. This falls under the category of “other.” These categories are not always clearly separated, and like all efforts to define poorly understood medical problems, they are imperfect. Nonetheless, looking at these categories can help you understand what you need to know. What is real and what is overblown?

This Campbell Plan excerpt is part of 2 full chapters on the science of gluten. As the follow-up “how-to” book to The China Study, It includes discussions about many other hot topics. You may purchase it here.