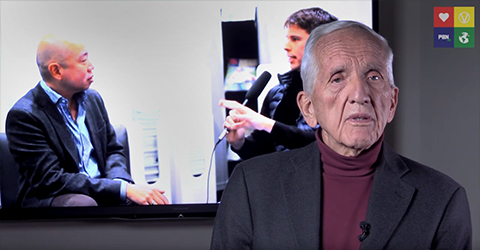 A little more than a year ago, I was interviewed by Dr. Giles Yeo for a long-known and respected BBC television show in England, concerning, The China Study. I thought it would be a good opportunity to advance the message on the health advantages of the whole food, plant-based diet. It didn’t quite turn out that way, as told in a previous article that I wrote for nutritionstudies.org, British Broadcasting Corporation (BBC), Your Credibility Is Tarnished.

In addition, Dr. Caldwell Esselstyn of the Cleveland Clinic was also interviewed for this program at his home in Cleveland, Ohio. His interview and the interviews of three of his patients were cut from the program. Dr. Esselstyn wrote about this BBC experience in British Broadcasting Corporation (BBC), Your Credibility Is Tarnished Part 2.

There was also an exchange of views on Twitter with BBC, Dr. Yeo, and the Center for Nutrition Studies regarding this controversial program. You can view the conversations on Twitter using the hashtag #HorizonCleanEating.

We now have a Part 3 of this BBC affair. Dr. Yeo, of Cambridge University in England, and his BBC friends seem intent on misrepresenting my BBC interview because they have a different agenda on how to promote human health that is focused on preventing and treating disease by genes and a corresponding use of drugs. Initially, I was informed a few months ago by people unknown to me about new lectures of Yeo in Europe, then heard that CBC in Canada had shown the BBC interview on national TV. I was told that Yeo was claiming that he had gotten me to admit that I had no proof of what I was saying. Finally, I learned that a new acquaintance in the UK, Gordon Mackenzie, who had taken offense to the video, was challenging BBC authorities, along with a follow-up complaint with the government’s media watchdog agency Ofcom. Each time he was rebuffed.

A short while later I gained another new friend from the UK, Klaus Mitchell of Plant Based News, who had a chance to interview Dr. Yeo on film at a conference that both were attending in London. The idea was to question him about his behavior on the BBC show. The film of that interview with Dr. Yeo by Mitchell is presented here.

For more than 40 years, and especially since my co-authorship of a 1982 National Academy of Science (NAS) report on Diet, Nutrition and Cancer, I have personally experienced first-hand the pushback of powerful food and drug interests against evidence favoring greater consumption of whole plant-based foods. That 1982 NAS report was said at that time to have become the most sought-after report in the history of the Academy. On so many occasions ever since that time, I have witnessed first-hand how Big Government, Big Industry, Big Science (as in Academia) and Big Media really do collude to control knowledge about diet, nutrition, and health. As a result, they cheat the public by minimizing or even denying a nutrition message that is far superior than all the pills and medical procedures combined. Almost always these occasions are presented as highly reputable science, sadly leaving the public confused. A very highly level of NOISE exists within an environment where the all-important signal on nutrition is not heard. Of the many experiences similar to this that I have had, this is one of those rare occasions to see how this works. For many, it may sound like a dispute about two views of science but in reality, there’s more, lots more. I do not lament this as a personal slight because it is a gift showing how the health care industry operates through its many foot soldiers who may not know the role they play by fostering a corrupt system that is called modern medicine.

I want to publicly thank Klaus Mitchell and Gordon Mackenzie for their interest, passion and professionalism in developing this project. Also, I acknowledge Plant Based News for initiating and producing the film.

You can follow along and support this campaign by visiting wholistnutrition.com/bbc-campaign.