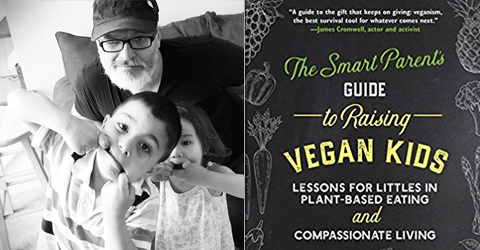 The following is an excerpt from The Smart Parent’s Guide to Raising Vegan Kids (July 2018, Skyhorse Publishing) by vegan blogger and former meat-eater Eric C. Lindstrom.

Milk is not easy to quit.

From a glass of cold milk and thick Greek yogurt to creamy ice cream and melty cheese, so many favorite foods are made from milk or contain milk. However, that being said, it is the single most important animal byproduct to eliminate from your family’s diet.

Two of the foremost authorities on the dangers of milk in a person’s diet today are Drs. T. Colin Campbell and Thomas M. Campbell, co-authors of the best-selling book The China Study who have written volumes on the health dangers of milk. T. Colin Campbell once told me personally that he thinks milk is more important to remove from your diet than even meat for health reasons. (Still, remove meat.) We’ve been fed the myth that humans need milk for calcium, even while clinical research shows that calcium in dairy products have little or no benefit for bones. People often drink milk in order to obtain vitamin D in their diets, unaware that they can receive vitamin D through other sources (including a ten-minute walk outside during daylight). Actually, few foods naturally contain vitamin D, and no dairy products naturally contain this vitamin. Fortified cereals, grains, bread, orange juice, and soy or rice milk are excellent options for providing vitamin D through diet, as are mushrooms, which also happen to be my favorite pizza topping.

Dr. T. Colin Campbell calls casein, the animal protein found only in milk, the number one fuel for the cancer fire.

Amazingly, consumption of dairy products has also been linked to higher risk for various cancers, especially cancers of the reproductive system—prostate, ovarian, and breast cancers. In fact, Dr. T. Colin Campbell calls casein, the animal protein found only in milk, the number one fuel for the cancer fire.

And what about pesticides? Polychlorinated biphenyls (PCBs) and dioxins are examples of contaminants found in milk. According to Dr. Campbell, dairy products contribute about one-fourth to one-half of our dietary intake of total dioxins, and these toxins do not readily leave the body and can eventually build to harmful levels that may affect the immune, reproductive, and central nervous systems. Moreover, these PCBs and dioxins have also been linked to cancer.

Milk proteins, milk sugar, fat, and saturated fat in dairy products pose health risks and encourage the development of obesity, diabetes, and heart disease—in children. So, why are parents so set on introducing dairy to their bright-eyed, freshly-weaned infants?

When preparing to write this book, I went straight to Dr. Tom Campbell, who happens to be a friend of mine and the father of a vegan toddler and a newborn. “How bad is milk for humans?” I asked. “And how are you sure your kids are getting enough nutrition without it?”

“Pediatricians have been taught that dairy is essential,” Campbell said. “It’s in all the standard pediatrics histories that we learn to go over with parents. Oftentimes, the standard American kid diet is loaded with cheese. Lots and lots of cheese, several times a day, with snacks of yogurt and milk over sugar cereal. In this case, dairy would be a great target number one [to eliminate].

Whole-food, plant-based diets are richer in most, but not all, nutrients. Having looked at this question in detail, I feel confident about this. We supplement our older kid, who is weaned, with B12 and vitamin D, and occasionally iodine (we don’t eat many sea vegetables, which are rich in iodine). Our newborn is exclusively breastfed, and my wife supplements with B12 and D and occasionally some iodine.

Apart from the number crunching aspect of having looked at the nutrient content of a well-planned plant-based diet, we also know that our kids are growing and developing well, which is reassuring.

In general, this is the way most physicians assess whether a kid is getting enough calories and nutrients in general: growth and development.”

Adding an extra glass of milk was also associated with a 15 percent increased risk of death from heart disease.

Years ago, I had a friend whose physical therapist told her to cut out dairy as it was possibly the cause of her back pain. Back then, during my omnivorous days, I refused to believe that milk could be bad for your bones (and that I would ever take something like milk away from my kid). I was one of the millions of people who have been lied to about the health benefits of dairy. Years later, as a vegan, I actually met her physical therapist. I retold this story to her and found out that my friend’s back pain has since completely gone away since giving up dairy.

This is why your own grandmother or grandfather has fallen and can’t get up. Since they were a little child, they were told that milk was helping with their bone density when, in fact, the opposite was taking place.

This was an excerpt from The Smart Parent’s Guide to Raising Vegan Kids (July 2018, Skyhorse Publishing) by vegan blogger and former meat-eater Eric C. Lindstrom.