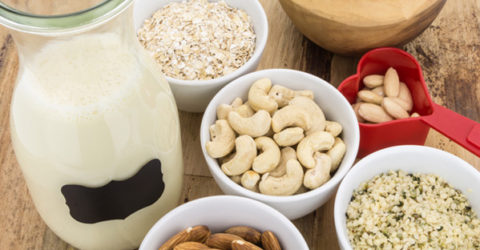 There is a proliferating variety of plant-based milks available. Sorry, dairy industry – I’m going to go ahead and use the word “milk”. I commonly get asked about which plant-based milk is the best choice.

Briefly, here are some of my thoughts on the various plant-milks, in alphabetical order. Please note an important disclaimer: these impressions are based on availability I have in my local store. There certainly may be variations and differences between brands that I’m not aware of.

Almond Milk: I like the nut milks the best, but it’s important that you only choose unsweetened varieties. In my location, I can get unsweetened plain, vanilla, and chocolate.

Cashew Milk: Same as almond. Get unsweetened varieties only, which are a good choice.

Coconut Milk: This is essentially very dilute coconut fat, though perhaps not always as dilute as some of the nut milks. This is similar in nutritional content to the unsweetened nut milks. Again, I’d only consider the unsweetened and low-calorie varieties.

Hemp milk: If you get the unsweetened variety (0g sugar), the nutrition on some brands looks pretty good. Some brands include more protein than the nut milks, though other brands are richer in fat. Choose lower calorie varieties if possible. In addition, this is harder to find, I think in part because the taste doesn’t have as much appeal.

Oat Milk: No added sugar, and yet the sugar is sky high. How did they get oats and oat bran to be such sugar bombs? I avoid this.

Pea Protein Milk (Ripple): I don’t like the added oil, not to mention the fact that it would be a fairly rare circumstance when I recommend consuming isolated plant proteins. And this is basically a liquid formulation of isolated plant protein and oil. The original, vanilla and chocolate varieties also all have added sugar. I’ve never personally had this milk, but I appreciate the marketing push behind this brand for the general population. When given a choice between cow’s milk and this milk, I would recommend this product (and then ask, “have you tried unsweetened almond or cashew milk?”).

Rice Milk: This used to be what my family drank years ago. It was one of the early varieties of plant milks available in our area. But there’s a problem here similar to the oat milk. With no added sugar this still manages to be a relative sugar bomb. In addition, there’s added oil in some of these. As if that wasn’t enough, it is a totally unnecessary source of arsenic in the diet. I avoid this.

Soy Milks, Flavored Varieties: Many of these are super high in added sugars. I ask my patients to avoid these unless they specifically and clearly are labeled “unsweetened.” Chocolate soy milk – just forget it. There are, however, some varieties of vanilla that I’ve found that have no added sugar. Be careful, though. The standard vanilla varieties are very high in added sugar.

Soy Milk, Original/Plain: I like soy milk for having a more complete nutrient profile, which is useful if you’re in the situation of actually wanting to increase calorie intake. It includes far more protein than most other plant-based milks. But the original varieties have added sugar. I certainly don’t want my patients to have that, so I ask they only choose varieties that are “unsweetened.” A side question that commonly comes up: shouldn’t I be avoiding soy? The short answer – no. Soy doesn’t seem to increase risk of breast cancer or lead to hormone problems. It potentially may actually decrease risk of some of these things. A small minority of the population may have food allergies and sensitivities and soy is a slightly more common plant allergen. Depending on the study you read, less than 1% of the population (as assessed by food challenge tests) and perhaps as much as 2-3% (as assessed by IgE blood test) has a soy allergy If you’re one of a small minority of folks with an allergy or intolerance, by all means, definitely avoid soy.

Soy Milk, Restaurant Editions (coffee shops, etc…): Unfortunately, you’re really not doing yourself any good by getting soy lattes or other soy drinks out at coffee shops, although you may feel more virtuous as you place your order. A small soymilk at Starbucks, or, sorry, a “Tall” soy milk at Starbucks has 21 grams of sugar. Holy sweetness! Some of these shops use super sweet milk to keep customers coming back.

Quinoa Milk: Did you know there was such a thing? Unsweetened varieties can be OK, if you like the taste.

In summary, some general points:

Overall I find the fact that there are so many plant-based milks available, a positive market trend, making it easier than ever to eliminate animal milk from the diet.

Plant-Based Diet for Diabetics: What About the Carbs?

How a Nurse Practitioner Saved Her Health With a Whole...

Book Excerpt: From Plant to Planet: Nudge your way...

Protein Isolates: Do They Have a Place in a Whole Food,...