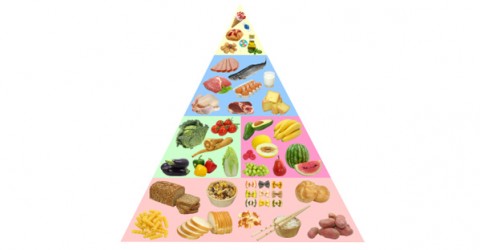 It’s been our goal since the beginning to cut through the glut of available nutrition information and to give you just the pure, unadulterated basics so you can make healthful dietary change. With new advice hitting us from every direction, I know the sorting out process can be difficult if not impossible. Ironically, the most confusing area of all may be the new dietary guidelines.

For example, what are the U.S. Dietary Guidelines? How are they related to the new Food Guide Pyramid? And what about the Mediterranean Diet Pyramid? And now the Asian Diet Pyramid? If you don’t know the answers, don’t feel bad. You’re probably keeping company with some of the top nutrition professionals in the country.

If these dietary recommendations are confusing for the professionals, you can imagine what they’re like for regular folks who just want to know, simply and clearly, what to eat for optimum health. It’s a regrettable fact that although 58% of Americans say they’ve heard of the USDA’s Food Guide Pyramid, only 13% say they understand it!

A Tale of Dairy Foods and Pyramids

“Eat a variety of foods,” and “Choose a diet low in fat, saturated fat and cholesterol.” They were developed in 1980 to ensure that Americans would have the knowledge to eat nutritionally sound diets while avoiding diet-related chronic diseases. In the 1995 revision, for the first time, they mentioned the ‘V’ words – vegetarians and vegans. While vegetarians who eat milk products and eggs were said to “enjoy excellent health,” vegans, who eat only foods of plant origin, were advised to supplement their diets with B-l2 (which comes “only from animal products”) as well as vitamin D, which “most Americans obtain from milk products.” In future issues of New Century Nutrition, we will continue to debunk these pro-dairy industry myths.

The Food Guide Pyramid is a pictorial representation of the Dietary Guidelines. When this Pyramid was first released about two years ago, it replaced – at long last! – the Basic Four Food Groups. The Basic Four was represented as a square or circle comprised of four equal parts: two for animal-based foods, and two for plant-based foods. With the new Pyramid, the animal-based food groups are placed in the top part of the pyramid, thus relegating them to a smaller fraction of the total area. Although it’s an improvement that fewer animal foods are being recommended, the implication remains that these foods are necessary for health.

In my experience on committees developing these recommendations, I have come to understand that they are powerfully influenced by a strong political undertow. The U.S. Dietary Guidelines are published by a joint committee representing the Department of Agriculture (USDA) and the Department of Health and Human Services (HHS). These two cabinet-level government agencies represent an interesting duo. The USDA has been primarily interested in the health of the livestock-oriented agriculture industry, while the HHS has been primarily concerned with the health and nutritional well-being of human beings, including the long-held belief that animal foods are necessary for strong bones and teeth and for maximum growth. Both the Dietary Guidelines and the Food Guide Pyramid reflect a compromise position between their two politically powerful parents.

Nevertheless, I believe that there is value in having these documents. They establish benchmarks for consumers and government nutrition programs – when they are used. My biggest problem is that due to the severe political agendas that constrain the forthrightness of the recommendations, something crucial is missing. This is the solid, scientific evidence that now strongly favors very low-fat, plant-based diets.

Many other scientists feel the same way. The results are the two “unofficial” Food Guide Pyramids – the Asian and Mediterranean Pyramids, which give greater emphasis to plant-based foods and allow for small, relatively infrequent amounts of meat. These are sponsored by the non-profit Oldways Exchange and Preservation Trust in cooperation with Harvard University (for the Mediterranean Pyramid) and, more recently, with Cornell University in designing the Asian Pyramid. Oldways Trust promulgates the rather attractive idea that a plant-based diet is the best diet for the world. By honoring distinctly different cuisines, not only is health promoted, but cultural variety as well.