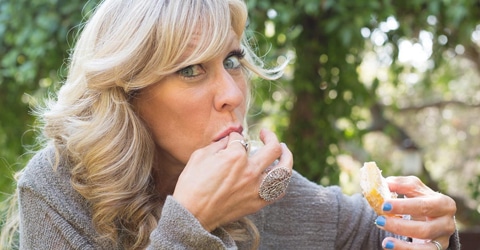 When ‘Healthy Eating’ Becomes Bad for Your Mind

The following is an excerpt from The Joyful Vegan: How to Stay Vegan in a World That Wants You to Eat Meat, Dairy, and Eggs (2019, BenBella Books) by Colleen Patrick-Goudreau.

In 1997, a medical doctor coined the term orthorexia nervosa to describe the obsession with healthy eating he had seen in several of his patients. Built from the Greek ortho meaning “straight, correct” and orexis meaning “appetite, diet,” it translates to “a fixation on righteous or correct eating.” Orthorexia nervosa is not an official medical or psychological diagnosis, and I’m reluctant to use the term lest it sound like I’m pathologizing healthy eating. After all, healthy eating isn’t exactly most people’s problem; unhealthy eating is. The most preventable killers in industrialized countries are those that have been coined the diseases of affluence—atherosclerosis (hardening of the arteries, which leads to heart disease and stroke), cancer, and diabetes—and all are linked to the consumption of meat, dairy, and eggs. Recent research from the Journal of the American Medical Association concluded that diets high in meat and other animal-based protein were associated with a higher risk of premature death, and diets high in plant-based proteins, such as nuts, legumes, and beans, were associated with a lower risk of premature death. Eating more healthfully is a solution—not a problem.

That said, I do think some people can turn the desire for optimal wellness into an obsession. In fact, because orthorexia has less to do with self-esteem and poor body image than with fear of illness and poor health, some experts classify it as a form of OCD (obsessive-compulsive disorder) and say it’s seen more prevalently in type-A personalities—people who tend to be more controlling, competitive, and self-critical. There is a line between being health-conscious and being health-obsessed, and it seems to rest somewhere between wanting to eat what’s healthy and being anxious about eating only what’s perceived as “pure.” People who view food through this lens of perfectionism take the desire to eat well to the extreme, carefully controlling their diet, feeling virtuous for eating only “clean” foods, feeling polluted if they eat something “unclean,” and experiencing anxiety over not being able to eat perfectly all of the time.

Obsessing about being healthy can also lead to anxiety and burnout.

To be clear, just because you diet, avoid allergens, honor your food preferences, eat mindfully, or characterize yourself as “plant-based” or “vegan” doesn’t mean you’re unhealthily fixated on gastronomical purity. Nor is that the case if you avoid certain food groups because of allergies or medical conditions such as celiac disease. However, allergies and ailments aside, when it gets to the point that you denounce any recipe and fearfully avoid any dish that contains even trace amounts of oil, sugar, salt, soy, carbohydrates, wheat, gluten, or alcohol, the road to health can look more like drudgery than joy. When the “good foods” list keeps getting shorter and the “bad foods” list keeps growing, when the guidelines become rules, when the rules become unbreakable—it may be time to stop and take stock.

Aside from the psychological distress this type of rigid eating can cause, it can also be socially and personally disruptive, leading to any of the following situations:

Rigid eating is seen in many health-conscious communities; it is not specific to those who abstain from animal products. And some people mislabel anyone who eliminates specific foods—including vegans—as being rigid eaters. But it’s important to remember that rigid eating isn’t simply about restricting certain foods; it’s about how an individual adheres to a particular way of eating and the way they use restrictions to foster disordered thinking and behavior around food.

Obsessing about being healthy can also lead to anxiety and burnout. Not only is it detrimental to long-term happiness and well-being, there is evidence to suggest that those who eat plants for their health may be at a greater risk of recidivism, or returning to consuming animal products, than ethical vegans. A study published in the journal Appetite on the “differences between health and ethical vegetarians” found that people who are vegetarian for ethical reasons are more likely to remain vegetarian than people who go vegetarian for health reasons. We don’t know for sure why that is, but having a rigid view of what constitutes healthy eating may be one reason.

Two possible explanations for self-described “health vegans” returning to eating meat, dairy, or eggs are eating a calorically restrictive diet and having unreasonable expectations about the healing power of plant foods. Another study in Appetite found that health-motivated vegans were less likely to take either vitamin B12 or vitamin D supplements, possibly because they believe that whole plant foods are a superior source of essential nutrients and that supplements are artificial and thus “impure.”

If that’s true, it may place health-motivated vegans at higher risk for nutrient deficiencies, and it may also be the reason they return to eating meat, dairy, or eggs (and feel better once they do). It’s not that eating a whole foods, plant-based diet isn’t optimal in terms of health and wellness, and of course no reputable doctor would recommend substituting dietary supplements for healthy plant foods, but nutrient deficiencies can be caused by any number of factors (hormones, stress, malabsorption, digestive issues) and may not always be remedied by whole foods alone. (In other words, supplements may help.)

The bottom line is if you expect veganism to be a panacea for all your health issues, you’re more likely to attribute any new hard-to-diagnose ailment or possible nutrient-related deficiency to the fact that you’ve stopped eating meat, dairy, and eggs. Add to that obsessive googling, getting nutrition advice from the unaccredited University of YouTube, and following ex-vegans on social media, and chances are you’ll stop being vegan.

Taking charge of your own health isn’t inherently bad, but when speculation supplants science and diet trends take precedence over common sense, being your own diagnostician can be a slippery slope. If you become convinced that it’s more “natural” to get your omega-3 fatty acids from eggs or fish rather than from a supplement (even though, these days, egg-laying hens and farm-raised fish get their fatty acids from supplements added to their feed), you’re likely to start eating eggs and fish again. You may even feel better once you do so. It’s possible, however, that you would have also felt better if you took omega-3 supplements made from algae (the origin of omega-3 fatty acids) while continuing to eat a whole foods plant-based diet. The same applies to eating a calorically restrictive diet (which many ex-vegans admit to adhering to): if you’re perpetually lethargic, hungry, and unable to concentrate, it may be because you aren’t getting enough fuel (that is, calories) to sustain your energy and mental acuity. If you add meat, dairy, and eggs back into your diet—and thus more calories—you will most likely feel more energetic, satiated, and clear-headed. It’s possible, however, that you would have felt just as energetic, satiated, and clear-headed if you just ate more calorie-dense plant foods.

Eating enough calories, having reasonable expectations about the healing power of food, and redefining what healthy eating looks like are just a few of the ways to counteract the negative effects of overconsuming health-related information and thus feeling the temptation to return to eating meat, dairy, and eggs.

Are You a Mindless Eater? Change Your Relationship with Food

Why Stress Can Make You Overeat and How to Stop It